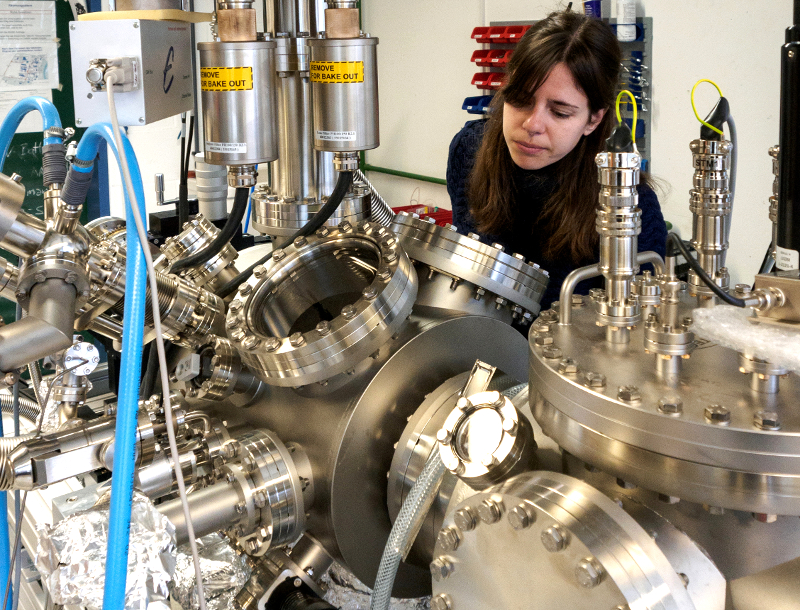 The inside of the chamber is less than a trillionth of the air pressure in the surrounding lab. It also contains a heater that can reach thousands of degrees and a microscope capable of imaging surfaces down to the level of the atom.

Sometimes she simply wants to prove that they can, indeed, be coaxed into existence. Other times the goal is to thoroughly understand their physics, and sometimes she has also ‘decorated’ them with atoms and molecules, just to see what happens.

She is at the leading edge of an explosion in making 2D materials since a one-atom-thick layer of carbon known as graphene was first isolated in 2004 by pulling sticky tape across the surface of a pencil.

In a recent paper published in Nature Chemistry, Dr Garnica, who is based at the Technical University of Munich, and her colleagues report that they have managed to make a new type of structure by fusing other organic molecules to the edges of graphene – a novel way of giving graphene interesting properties that could find applications in technology and medicine.

‘It is the first time that it’s been proved that graphene can be functionalised by this method,’ said Dr Garnica, who has been funded by the EU under the Marie Skłodowska-Curie Actions programme.

To make graphene, Dr Garnica heats a rod of graphite to thousands of degrees until a few atoms of carbon gently lift away and lay themselves, in a single layer, on a crystal of silver.

She also wants to make a 2D layer of silicon carbide, highly anticipated amongst theorists as a semiconductor that could rival silicon, the material that forms the basis for the electronic circuits we use today.

She is simultaneously vaporising graphite and a wafer of silicon, in the hope that their atoms will nestle together into a honeycomb lattice atop another crystal of silver.

The goal is to thoroughly understand 2D materials at an atomic level. That’s because, since graphene was first discovered in Manchester, UK, 2D layered materials are giving engineers the tools they need to create the highly efficient and flexible devices needed for a low-carbon world.

‘It is just one of hundreds, if not thousands of layered materials,’ explained Professor Jonathan Coleman at Trinity College Dublin, Ireland, who has now created 25 different 2D materials – and he’s still going.

He’s at the other end of the scale, making 2D materials using the laboratory equivalent of a kitchen blender.

Prof. Coleman perfected his technique on graphene, dissolving graphite in soapy water and then blending it.

The blades slice through the liquid with a shear energy that slides graphite layers apart, and the soapy water swiftly coats each flake, preventing them from clumping back together.

Boron nitride, an effective insulator, was next. ‘It’s the simplest after graphene,’ said Prof. Coleman.

Soon after came molybdenum disulphide, which as it turns out can hold three to four times as much electric charge as the graphite that is traditionally used in lithium-ion batteries. He has also created a 2D version of nickel hydroxide, a catalyst which could improve the quality of fuel cells, which make electricity from hydrogen and oxygen.

To his surprise, Prof. Coleman’s blender technique has also managed to make phosphorene – one of the potential high-flyers of the 2D world because, like silicon carbide, it promises to be a semiconductor to rival silicon.

Although it is very unstable, he found that if he adds certain liquids to the mix they will protect the sheets of phosphorene from chemicals that might react with it, leading to a substance that might be useful in batteries and gas sensors.

‘It can be quite simple, and that’s actually really important.’