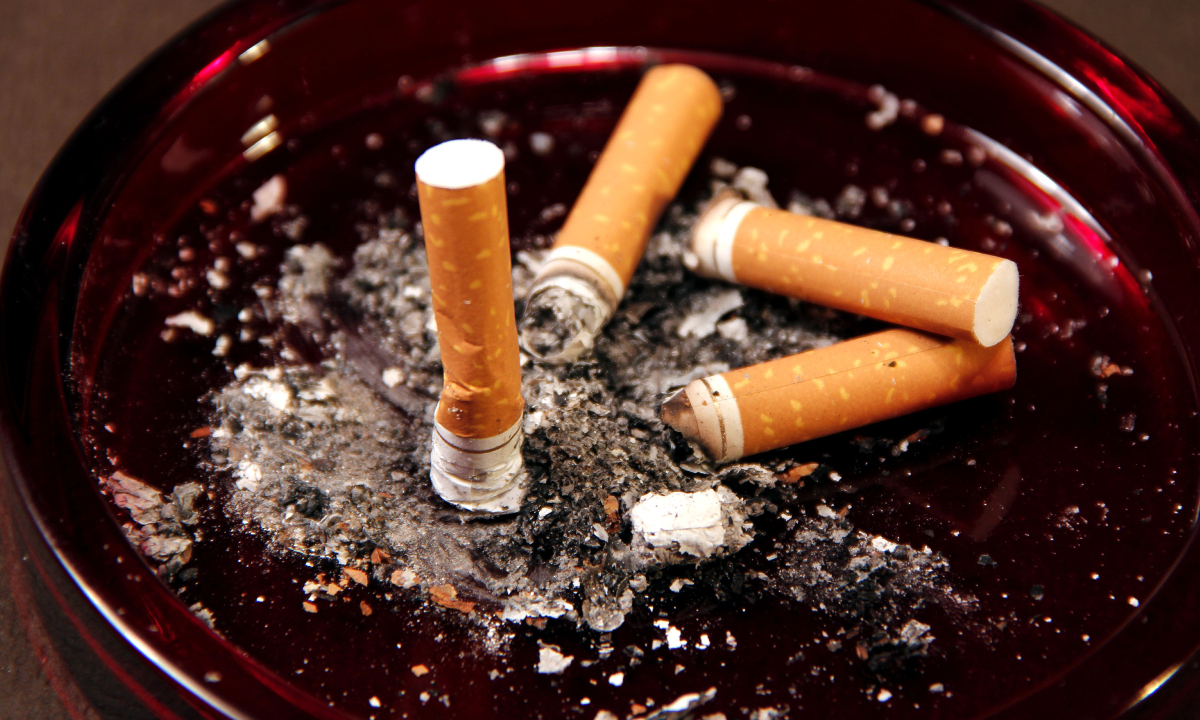 The number of smokers in Europe has declined over the past 50 years, but more than 20 % of adults in Europe still smoke. Image credit: ‘Four cigarette butts along ashes’ by Debora Cartagena is in the public domain

Real-time data from smokers’ brains could help them re-programme their minds and stub out cigarettes for good.

It’s one of the options being explored by researchers who are looking into the most successful ways to quit.

Neurofeedback is a brain-training technique that uses electrodes placed on a person’s head to create a live feed of their brainwaves. This information is displayed in front of the person who can then visibly reshape their thoughts.

Smoking causes an estimated 650 000 EU citizens to die prematurely each year, but it is also the largest cause of preventable morbidity worldwide.

In 2009 the Council of the European Union called upon all Member States to protect their citizens from tobacco smoke by enhancing smoke-free laws such as encouraging efforts to quit and putting warnings on tobacco packages.

‘It allows them to control what they see,’ said Professor Panagiotis D. Bamidis from the Aristotle University of Thessaloniki in Greece, who is testing the effectiveness of the technique to help smokers give up.

‘Subjects are asked if they can do specific tasks and their reactions provide a feedback loop that lets them train their own brain.’

The ability of neurofeedback to identify negative thought processes has been used to treat mental illness and memory problems, but this is the first research looking into whether it is an effective technique for breaking an addiction.

‘With neurofeedback we can see what type of brain signals smokers are emitting when they are relaxed, then we ask them to follow specific tasks and record their reactions,’ said Prof. Bamidis.

When the subject encounters something that may trigger an urge to smoke, they will learn what the cause was and what thoughts could help them overcome the craving.

Prof. Bamidis says that smokers would need around twenty hours of treatment before feeling the effects from neurofeedback, but considering it’s a natural, drug-free treatment it could lead to high numbers of smokers willing to give it a try.

‘It’s a non-invasive, pain-free technique with no side effects so it has a lot of promise to change (smokers’) behaviour,’ he said.

Neurofeedback is just one of the quitting techniques being studied by Prof. Bamidis as part of the EU-funded SmokeFreeBrain project, to evaluate the best ways to stop smoking.

Another technique under examination is SoLoMo, which stands for social-local-mobile and focuses on using physical locations to send tailored information to a mobile device.

‘We are going to use social media techniques translated for local populations and ask them to follow healthy lifestyles with reminders and mini-games,’ said Prof. Bamidis.

SmokeFreeBrain will also assess the effectiveness of e-cigarettes, communication campaigns and more classic approaches like nicotine patches. At the end of the project in 2018, the researchers hope to have a guide outlining the best practices in smoking cessation and how these can be applied on a large scale.

‘We will figure out which approach is the most effective and economic,’ said Prof. Bamidis. ‘Our research will then help form tobacco policy at national and international levels.’

While these techniques and policies will help, any smoker knows that quitting is easier said than done. That leaves us with the bigger question – how do we motivate people to stop people smoking in the first place?

Over the last fifty years the number of smokers in Europe has been declining, but more than 20 % of the adult population still smoke.

‘Policies to ban smoking in public places and general social norms have changed and we see smoking rates have declined, but it has been quite slow,’ said Professor Anton Kunst from the University of Amsterdam, the Netherlands. ‘If it continues at this speed, smoking will persist for many decades to come.’

In recent years smoking has become concentrated in lower socio-economic areas where the ability to quit is harder due to financial and employment circumstances and the subsequent emotional stress. This in turn creates a spiral where following generations are regularly exposed to those who smoke.

‘It could show measurements of smokers’ brains.’

‘Among people in lower socio-economic circles, smoking is much more common and that could be related to factors like more emotional problems and being exposed to smoking amongst friends and parents,’ said Prof. Kunst.

Prof. Kunst is the coordinator of the EU-funded SILNE-R project which is examining how anti-smoking policies in seven European cities affect the smoking behaviour of 16-year-olds. Through comparison, the project aims to use the data gathered to create better prevention programs.

‘Different countries and municipalities have different tobacco policies,’ said Prof. Kunst. ‘We want to understand why some policies are able to influence young people and why others are not.’

They have already looked at smoke-free policies in schools, which have revealed findings into youth smoking behaviour.

‘If you ban smoking from school premises it changes the way young people look at smoking and raises awareness of the health hazards,’ said Prof. Kunst.

But while these anti-smoking rules can protect some it could make matters worse for others.

‘Such policies may create peer groups that go out of school to smoke which reinforces the habit and attracts others to start smoking who just wanted to be part of the group,’ said Prof. Kunst.

Possible solutions are to ban smoking in places around schools or to discourage kids from leaving by offering more appealing activities like sports or hobby clubs.

At the end of the project in 2018, SILNE-R hopes to present policy makers with concrete suggestions on how to make anti-smoking policies more effective for young people. In the meantime, Prof. Kunst warns any young smoker not to overestimate their willpower.

‘Young people don’t see how addictive smoking can be and are very confident they will stop later in life,’ said Prof. Kunst. ‘They must be told that there is no silver bullet to quit, that they would need to try hard to stop and find help where they can.’