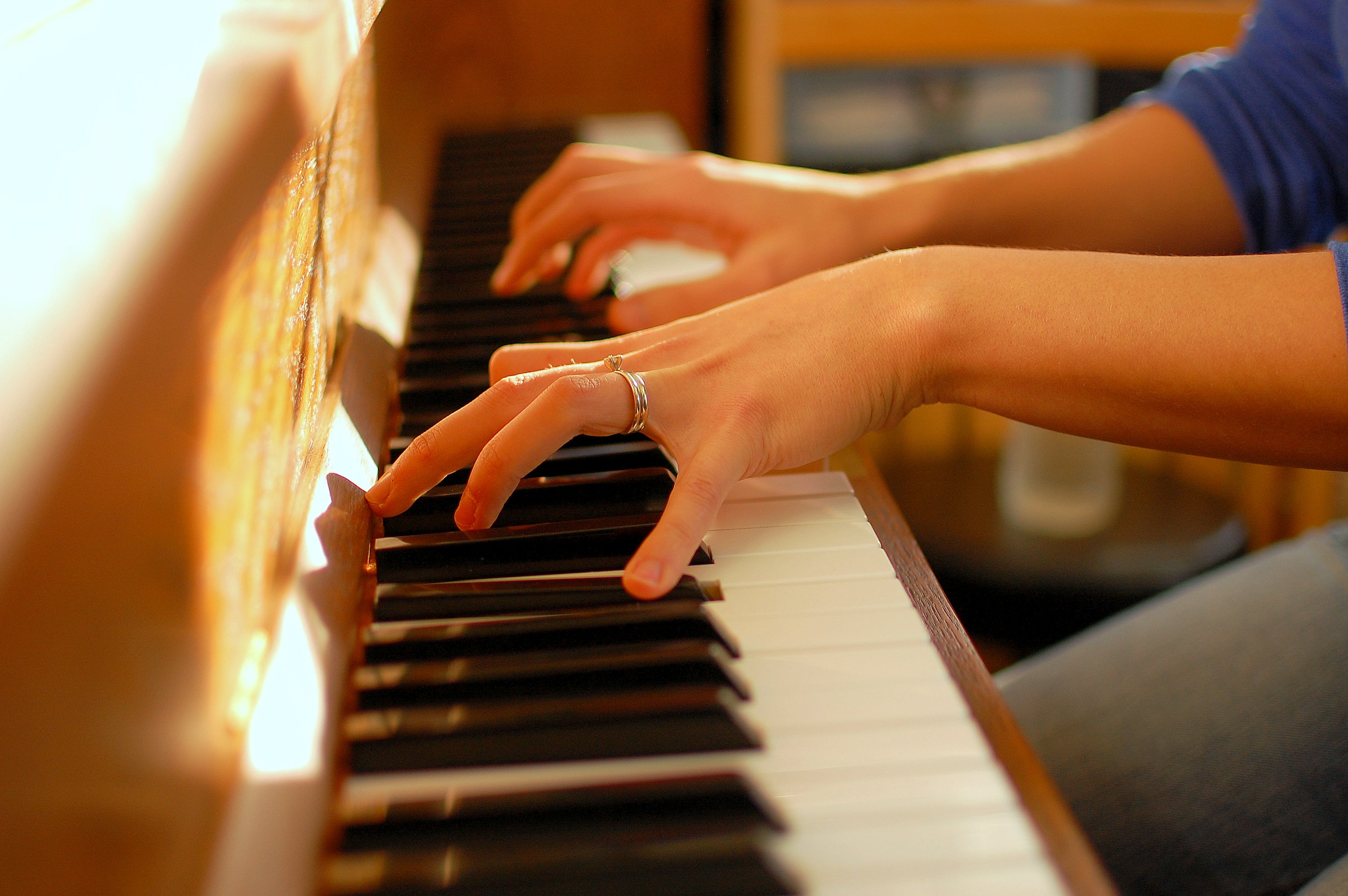 When a piece of music is played at the wrong tempo it is difficult to recognise because our brain uses rhythm to help make sense of sounds. Image credit - flickr/ Brian Richardson, licensed under CC BY 2.0

Neuroscientist Dr Domenica Bueti often plays an altered version of the classic aria La donna è mobile when she gives talks about the importance of time perception. Her friend’s piano rendition of Giuseppe Verdi’s composition uses the same notes but is played at different speeds. Rarely does anyone ever identify the tune.

‘When I play it with the right tempo, everybody recognises it,’ said Dr Bueti, a neuroscientist from the International School for Advanced Studies (SISSA) in Trieste, Italy. People are amazed by how different the two sound, she says.

Processing time is important for many daily activities from walking to playing sports. It helps coordinate movements, like knowing when to hit a tennis ball.

Dr Bueti is studying how our brain makes sense of short time intervals ranging from hundreds of milliseconds to just a few seconds. Short durations are what we perceive while listening to music, for instance. They are also crucial for understanding speech, since pauses between syllables and words affect meaning.

‘We use regularities in speech to predict how language will unfold and it's also important for language acquisition,’ said Dr Alan Langus, a neuroscientist at the University of Potsdam’s BabyLab in Germany. ‘When young infants don't understand a language yet they can use rhythmic cues to understand where words begin and how words are grouped into sentences.’

Much of how our brain perceives time – and hence rhythm – is still a mystery. Although there are dedicated brain regions for receiving and decoding sensory information, such as what we see and hear, others seem to be involved in processing time. But how these regions communicate – and the mechanisms they use to process durations – are unclear. Likewise, we still don’t know whether the same mechanism underlies the processing of different types of rhythmic information such as speech and music.

Better understanding this should help reveal whether there is a link between rhythm in speech and music, says Dr Langus. If this is the case, musical training could also benefit language skills, he adds.

Dr Langus and his colleagues studied how the brain processes rhythm in speech and music for a project called RHYTHMSYNC.

Previous research has tried to either measure reaction times, such as tapping to a beat, for example, or has directly looked at brain activity. But the team took a novel approach, using eye tracking - a cheaper technique than brain scans – to see whether people’s pupils change size in time with rhythm.

‘It’s spontaneous so we don't have to tell participants to tap to a rhythm, or to synchronise their behaviour,’ said Dr Langus. ‘The brain is doing that automatically.’

In trials, participants listened to either speech or music alone, then there was switching between the two. The team found that volunteers’ pupils pulsated to a rhythmic beat irrespective of whether it came from speech or music.

This suggests that the brain uses the same mechanism to process rhythm in music and speech and that it doesn’t distinguish between the different stimuli on a temporal level.

There are still details to pin down though. Speech and music are rhythmically different. In music, time intervals are regular whereas in language they are not.

‘Now what we're trying to do is to see how the mind copes with this variability in perceiving speech rhythm,’ said Dr Langus.

The team is now investigating how the brain perceives foreign languages that are rhythmically different from a person’s native tongue. Through eye-tracking experiments with native German speakers, they will look at their ability to process Italian and French speech, where syllables are roughly of equal duration. Then they will compare perceptions to Dutch and Polish. In these two languages, time intervals between stressed syllables are of the same duration.

We also know a little more about how the brain processes short rhythmic durations after Dr Bueti and her colleagues broke new ground this year by showing that a time map exists in the brain. 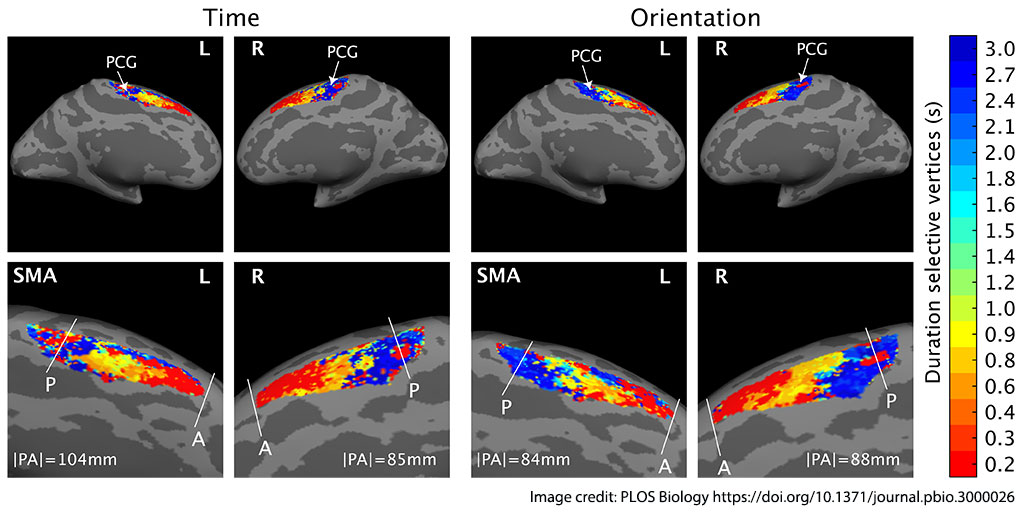 The map was found in the supplementary motor area (SMA), a part of the cerebral cortex involved in movement control. It was discovered by using fMRI to scan the brain of volunteers while they looked at images flashed on a screen. Their brain activity was recorded as they decided which of two images was presented for longer, with durations ranging from 200 milliseconds to three seconds.

The map is a topographic representation where neurons which process similar time durations are close to each other. Neurons at the front of the map were activated by the shortest lengths of time, while longer durations extended towards the back.

As they used images, Dr Bueti expected the time map to appear in the visual cortex. However, its presence in a motion-related area is consistent with the role of other regions such as the cerebellum or basal ganglia which are involved in processing time.

‘I think it’s probably because the way we sense time is related to motion, to something that changes either perceptually or at the motor level,’ said Dr Bueti, who carried out the research as part of a project called BiT.

Recent research showed that the brain also has a map for perceiving numbers. Dr Bueti hopes to investigate how the two maps are related. She also wants to determine whether the time map exists from birth or is a byproduct of experience and plans to explore this through experiments using fMRI scans of adults, babies and newborns.

In fact, being able to pin down rhythm perception in infants could also help to identify language problems early on.

Difficulties are typically recognised when a child is learning to read. ‘Testing abnormal language development in very young infants is difficult because there are very few predictors,’ said Dr Langus.

He and his colleagues have done eye-tracking experiments with five and six-month-old babies to see if pupil changes reflect their rhythm perception. They are currently analysing the data.

If rhythm perception in music and language is indeed linked, then a baby who has trouble synchronising to a beat may also find it hard to read when they are older. According to Dr Langus, eye-tracking rhythm tests could help forecast future language skills.

'The way we sense time is related to motion, to something that changes either perceptually or at the motor level.'

Certain conditions that are characterised by abnormal timekeeping could also be better identified by using the time map discovered by Dr Bueti and her colleagues. People with schizophrenia and Parkinson’s disease, for example, have temporal deficits.

The time map of a healthy individual could help with diagnosis by seeing how it differs to that of someone with a condition. ‘This is something for the future to be explored,’ said Dr Bueti.