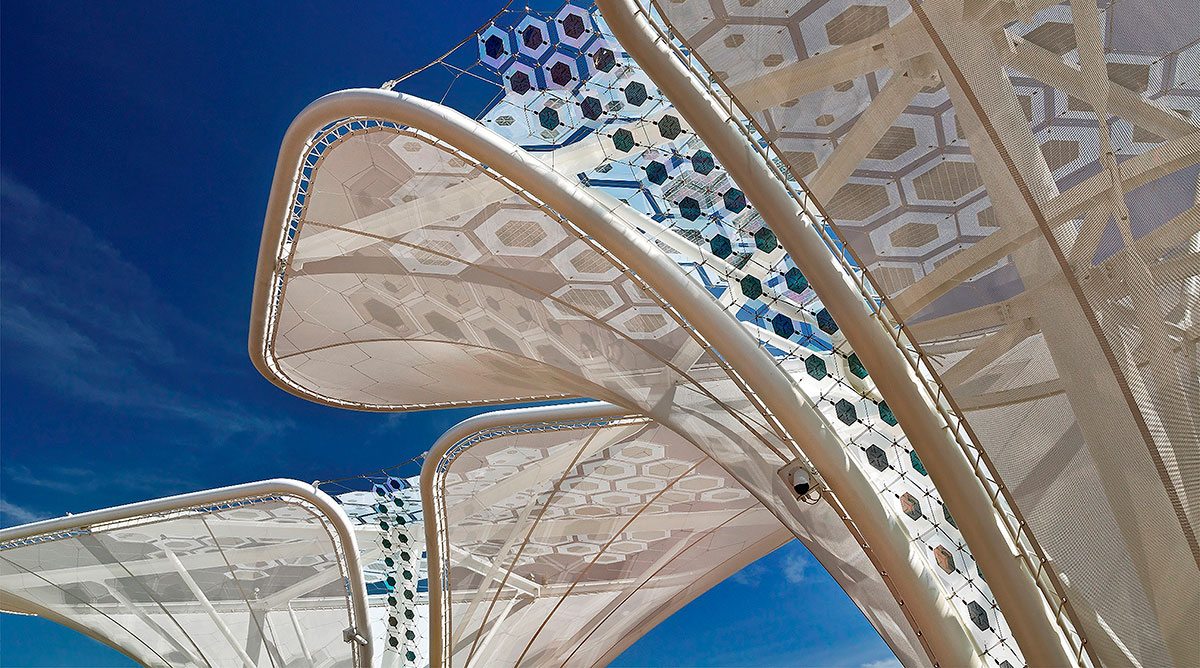 The standard solar panels we see on homes and businesses are made from crystalline silicon. These rigid photovoltaic (PV) panels convert light into electricity.

They weigh 20 to 30 kilogrammes per square metre and so cannot be placed easily onto all building roofs or onto facades. There is an alternative and more flexible competitor to silicon PVs, however.

Instead of silicon, researchers in Europe are working on organic photovoltaic (OPV) technologies. Organic simply means carbon-containing molecules and OPVs can be thought of as plastic solar cells. They offer advantages over silicon-based solar panels.

‘Their manufacture process (has the potential to be) cheaper, they are lightweight, offer flexibility in their architecture and in principle they can be more environmentally friendly,’ said Dr Francesca Fassioli, a theoretical physicist at Princeton University, US.

Plastic solar panels can weigh around 500g per square metre – more than 40 times lighter than their silicon counterparts. Plastic panels can be attached to the fronts of buildings or placed on the roofs of buildings that might struggle to safely support standard solar panels. Organic solar cells are also much thinner than silicon solar cells, offering substantial savings on materials, which is good for the environment.

In theory, plastic solar cells should also be easier to manufacture. ‘The main difference between silicon technologies and OPV is that we are able to print it or coat it onto something as a thin film,’ said Damien Hau, research, development and innovation manager at Armor, an engineering company headquartered in Nantes, France.

One of the company’s first such products, launched last year, has been installed on commercial greenhouses near Nantes to provide shade and generate electricity. Armor recently bought a German company, Opvius, that specialises in designing shaped plastic solar panels that could be used decoratively on buildings.

Organic PVs can be as thin as a few millimetres in thickness and can be placed onto plastic polyester films.

Armor has created thin semi-transparent OPVs that can be fitted inside windowpanes, so that office windows could filter out some sunlight while turning it into electricity. 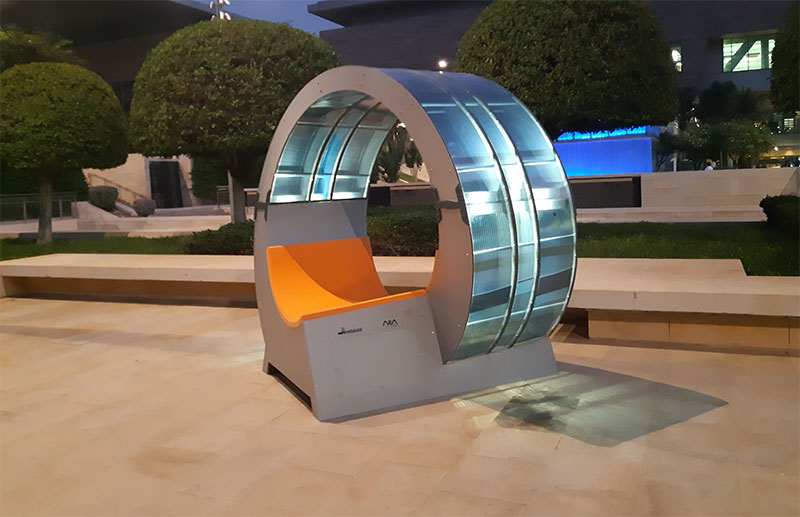 Almost 90% of all PV panels around the world today are made from crystalline silicon, which is an established technology on the market for decades. Typically they can convert 18% to 22% of the energy from sunlight into electricity.

Organic PV panels are a newer technology and have the disadvantage of lower efficiencies and higher production costs – partly because it is such a small industry, for now.

‘These are the two issues that our new project BOOSTER is working to solve,’ said Hau, referring to a new €6 million research project that his company is leading. The consortium will work on the best light-harvesting molecules, which in labs can approach 17% efficiency today. Standard panels generate 150 to 200 watts per square metre, whereas commercial OPVs generate 40 watts per square metre. BOOSTER aims to get this up to 150 watts.

It will push also towards lower costs for producing plastic solar panels. As a newer technology, some of the components were not designed for these solar panels but taken from other devices.

For example, as an organic material, plastic solar panels need shielding from ultraviolet radiation. Today, a thin film is used that is needlessly expensive. This is because it was developed to protect organic light-emitting diode (OLED) screens, which are in high-end televisions and require flawless films.

‘(Organic solar cells) are lightweight, offer flexibility in their architecture and in principle they can be more environmentally friendly.’

‘We don’t require that same quality for a barrier for OPV technology,’ Hau explained. A newly designed film specific for plastic solar panels could be far less expensive but still get the job done.

The project consortium, which consists of companies and academic partners, will make two demo products. First, a stick-on solar panel that can be attached to a door or floor or car or roof. ‘This is to prove that there is another way to do solar panels,’ Hau said. The sticky light-harvesting material will be installed on the headquarters of the energy company ENI in Rome, Italy.

A second demo product will see the plastic solar panel attached to textiles, of the sort that often cover buildings under renovation. This will be installed on a university building in Nuremberg, Germany, by a partner in the project.

While researchers here hope their efforts on organic PVs will bear commercial fruits in the very near future, other scientists are planting the seeds of future advances in solar power. This is the case with theoretical physicist Dr Fassioli, who will soon join the group of Professor Stefano Baroni at SISSA in Trieste, Italy.

Theoretical physicists use mathematical models and theory to explain the world around us, ideas which are then tested in experiments by others. Albert Einstein who revolutionised physics with ideas, pen and paper is perhaps the most famous theoretical physicist.

In her QuESt project, Dr Fassioli will therefore not be handling prototype solar panels, but instead investigate the fundamentals of how organic molecules interact with light, in order to increase the power conversion efficiencies of organic solar cells.

‘This is not about creating new molecules,’ said Dr Fassioli, ‘but about how to use the typical molecules in a more clever way.

To simplify, in a solar panel light is absorbed by molecules which become excited and release an electron, which creates electric current.

Dr Fassioli considers how optical cavities can trap particles of light. Optical cavities essentially consist of two microscopic mirrors to trap light particles (photons). If you place a material inside an optical cavity, a photon is continuously swapped between the material and the cavity and this gives rise to a new hybrid state.

The strange hybrid (called a polariton) is made of both light and matter. The phenomenon involves quantum physics, so can seem counterintuitive, even weird.

This hybrid state ‘can involve thousands or millions of molecules, such that the molecules no longer behave as independent,’ said Dr Fassioli, ‘but they become synchronised by the coupling to the light in the optical cavity.’

Her project will generate scientific publications and new knowledge and ideas about the interplay of matter and light. ‘We think this synchronised collective behaviour of excited molecules can be exploited to enhance the efficiency of photovoltaics,’ Dr Fassioli explained.

‘This is a bottom-up approach in terms of understanding mechanisms that will modify the properties of (organic solar cells), rather than pursuing an immediate application for commercial applications,’ noted Dr Fassioli. But the hope is that this work will in future years improve organic solar cells so that they convert more of the sun’s rays into electricity.