Life on the front line of climate change 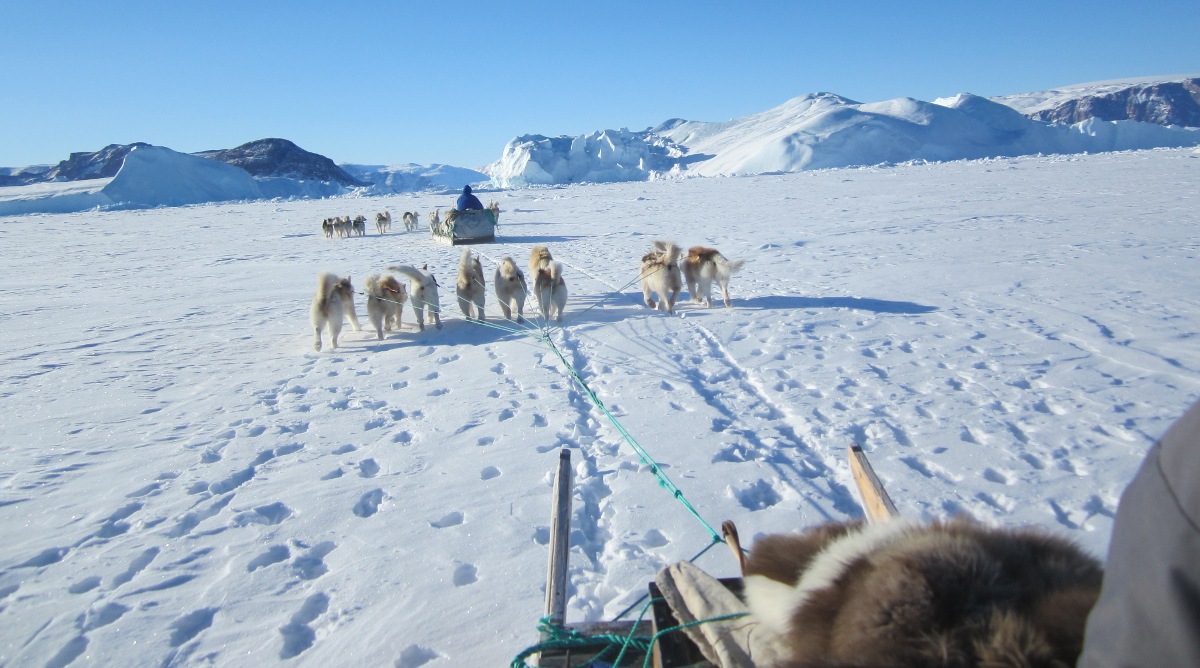 Measurement tools on dog sleds will tell researchers and the local Inuit population the ice thickness in northwest Greenland. Image courtesy of ICE-ARC

As signs of intensifying climate change are seen in Europe, researchers are looking into how life will change for people who live in the Arctic, and helping to count the global economic cost of the ever-increasing loss of sea ice.

In northwest Greenland, many of the region’s native Inuit maintain a strong connection to the environment through their traditional livelihoods of hunting and fishing. However, Dr Elaina Ford from the British Antarctic Survey says rapid economic and tradition upheaval is underway.

‘Those communities are under stress, but not just from climate change; there are lots of things that impact traditional economies, such as political decisions, industrial development, and job opportunities,’ said Dr Ford.

‘They are also dealing with, for example, sea ice change. An important part of the traditional way of life is the seasonal hunt for different animal species. If the ice is breaking up earlier and forming later, then they might not be able to safely access some of the traditional hunting grounds.’

She is working as part of the EU-funded ICE-ARC project, which is aiming to identify and understand these social vulnerabilities, in their local and pan-Arctic context. To do this, Greenlandic-speaking researchers are talking with locals about their concerns and the issues they face — even down to the need for scientists to communicate the reasons for their presence.

Dr Jeremy Wilkinson, also from the British Antarctic Survey and the coordinator of the 12-country ICE-ARC collaboration, says there is no one answer for how local communities feel about a changing Arctic.

‘Some in the government will view climate change as quite beneficial to Greenland, because it may open up resources they can’t yet access,’ he said. ‘For example, the sea ice retreating may allow for a longer open-water season for shipping, for hydrocarbon exploration, or opening new fishing grounds.

‘It benefits scientists to get that long context of changes, but it benefits the community to know what the ice is doing now.’

‘On the other hand, a local hunter may find it very detrimental, as some of his or her hunting grounds may not be accessible through traditional means, or the animals in question have moved onto different areas due to climate change.’

The ICE-ARC researchers are collaborating with local communities to gather data about climate change. For example, Inuit hunters from the village of Qaanaaq are helping them develop an instrument that can be fitted to dog sleds to measure sea ice thickness during hunting trips that make use of the sea ice as highways.

‘That ice thickness information that the dog teams have taken can be beamed back to ice centres in Denmark and Norway, which produce ice maps, which can then be pinned on the village shop giving the ice extent and thickness around the village,’ explained Dr Wilkinson.

Simultaneously, another team is looking at ocean sediment core samples around the region to tie together the climatic history of Greenland with its peoples’ rich history of climate adaptation, in order to look forward to how today’s communities might deal with approaching change.

Observations show that the Arctic is warming twice as fast as the rest of world; an alarming trend given its understood role as the world’s barometer of environmental health. Its summer sea ice cover has decreased by about 50 % since the late 1970s, a loss larger than the landmass of India.

With sea ice loss outstripping modelled predictions and complete summer loss being a realistic possibility within decades, ICE-ARC is also working to better understand the local and global economic impact of this.

The researchers are using their understanding of community vulnerabilities and resilience, along with data collected from sources including autonomous robot platforms, data-sampling buoys and submersibles, to predict what physical and living marine resource changes can be expected — and how fast.

These projections will be fed into an economic impact model, which essentially seeks to calculate the local and global economic costs of Arctic climate change.

The model, known as PAGE-ICE, will be the first to couple economic and physical projections, and is hoped to help improve EU and international policymaking around Arctic and climate issues.

Given the huge range of possible consequences of sea ice loss — including the opening of a Northern Sea shipping route, easier resource access, and related to this, expected regional investment of close to USD 100 billion by 2023 — not everyone stands to lose from an Arctic climate shift.

However, although Dr Wilkinson says some Arctic countries could see positive economic benefits from oil exploration and mineral reserve exploitation, he believes these would only exist on a regional, relatively short-term basis.

‘If you put that in a global perspective, if you start to take out Arctic oil or various other hydrocarbons, that impacts on the greenhouse gases emitted, this impacts our ability to get to the Paris declaration of (a ceiling of) 1.5 to 2 degrees Celsius warming,’ he said.