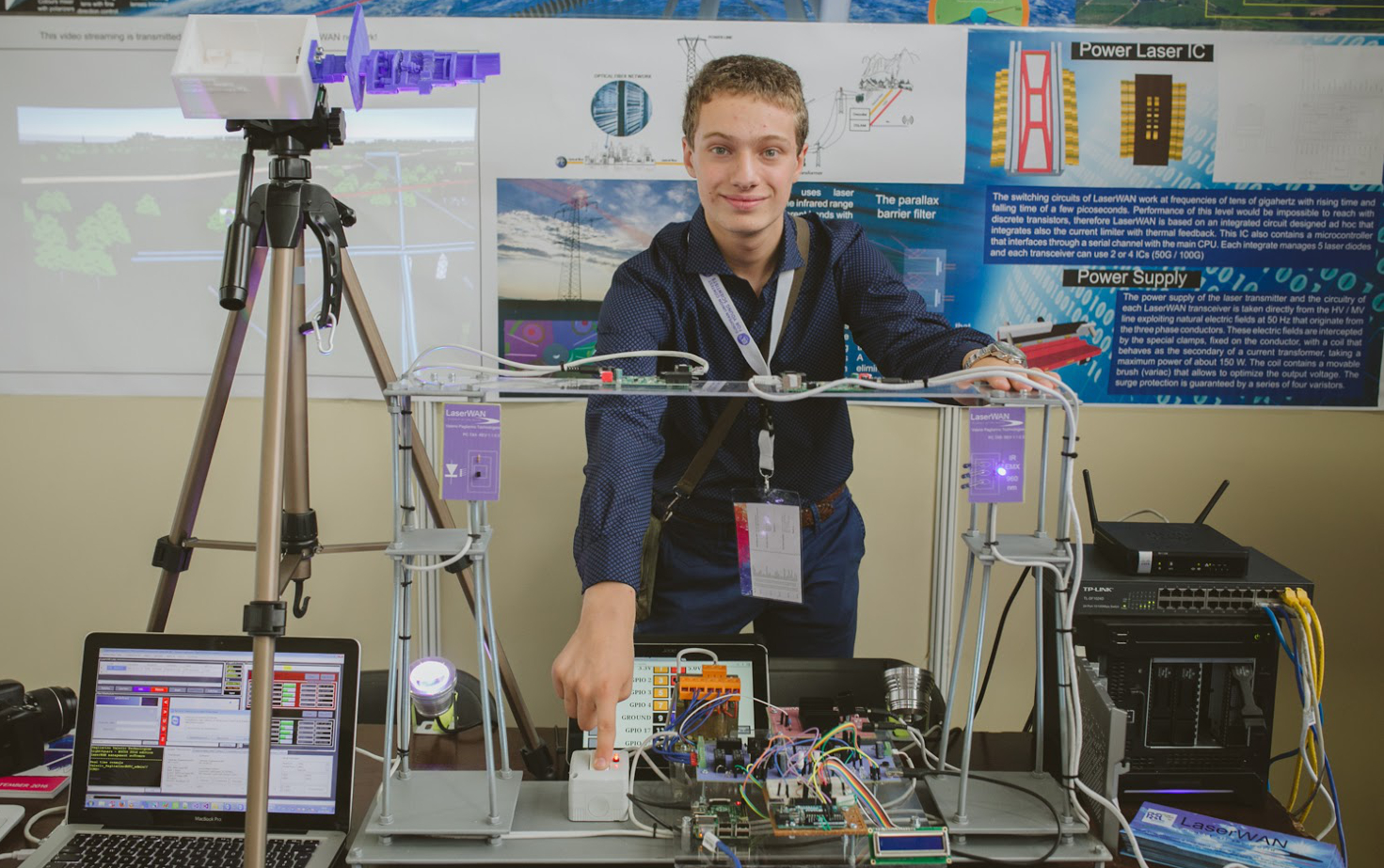 A laser-based broadband internet connection that could help to bridge the so-called digital divide, between people who have internet access and those who do not, has won its inventor first prize in the 2016 edition of the European Union Contest for Young Scientists (EUCYS).

Valerio Pagliarino from Italy received one of three EUR 7 000 first prizes awarded to young scientists for outstanding projects on 19 September at a ceremony in Brussels, Belgium.

He said he would be putting the prize money towards his university studies, but that the validation of his idea was more important than the cash.

‘It’s a very big step in my life and my career, for my passion of electronics,’ the 16-year-old said, adding that the prize would demonstrate to companies that the technology worked well.

He hopes to patent his invention, called LaserWAN, which uses the infrared rays of specific lasers to create a high-speed internet connection along power lines. It uses combined transmitters and receivers mounted on the top of electricity pylons in place of optical fibres.

Pagliarino says that, because the technology does not require expensive excavations to bury it underground, as is the case with optical fibre, it can help spread internet connectivity to isolated areas.

‘In Italy, we have a very big digital divide problem and so I decided to try and resolve this problem,’ he said. ‘First, I created the theoretical part of the design and then I created the small experiment for EUCYS. It is a green solution because LaserWAN doesn’t emit any kind of radio pollution or electromagnetic pollution.’

Pagliarino has already created a prototype of his product and says that a company is interested in his technology. ‘I hope and I think that in the future we can begin (an) engineering process to transform this idea into a real product,’ he said.

‘It is reassuring to see that Europe has so many bright young minds, who also have the determination and skills to turn their dreams into reality.’

First prizes were also awarded to American student River Grace for his investigations of the central nervous system of the brahminy blind snake, and a Norwegian team consisting of Ane Espeseth and Torstein Vik for their work in simplifying and generalising a number of relations in an area of mathematics known as number theory.

Carlos Moedas, the EU’s Commissioner for Research, Science and Innovation, said: ‘This year's winners were picked in a tough competition involving 138 young researchers, who all came to Brussels with brilliant new ideas.

‘It is reassuring to see that Europe has so many bright young minds, who also have the determination and skills to turn their dreams into reality. I hope to see many of them in a few years' time as part of the next generation of top scientists, working hard to solve the multiple challenges Europe and the world are facing.’

This year’s contest, which took place from 15-20 September, was the 28th edition of the awards, which were set up to encourage cooperation and exchange between young scientists and introduce them to some of Europe’s most prominent researchers.

In total, 45 young scientists were awarded a total of EUR 49 500 in cash prizes as well as a number of honorary and donated awards such as trips to European research institutes and science seminars.

The European Union Contest for Young Scientists began in 1989 with the aim of getting more young people involved in science and encouraging them to embark on a career in research.

The competition standard is high as all participants must have previously won a competition for young scientists at a national level. Entries from individuals and teams of up to three people are allowed and the students must be aged between 14 and 20.

A jury of leading scientists awards the prizes based on originality and creativity, skill and thoroughness in how the project has been carried out, reasoning and clarity in the results and top class presentation of the project.