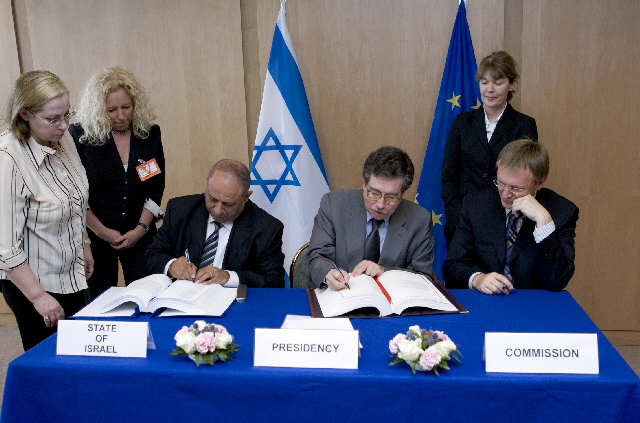 As the Portuguese Minster for Science and Technology, José Gago was heavily involved in European science policy, such as the agreement on the cooperation with Israel in the Seventh Research Framework Programme. Credit: European Union

Shortly after his appointment as European Commissioner for Research, Science and Innovation, Carlos Moedas had the opportunity to meet with his compatriot, the former long-serving Portuguese Minister for Science and Technology José Mariano Gago. During this meeting, which was very cordial, and at the occasion of a series of further contacts which took place until his death on 17 April 2015, José Gago strove to expose to the new Commissioner his views and concerns about the situation and the future of science in Europe, drawing, for instance, his attention onto a project which he judged worthy to be encouraged and supported by the EU for scientific and political reasons, the SESAME particle accelerator in Jordan.

The former minister was not from the same political side as the current Commissioner. Other persons in his position could have behaved differently, keeping their distance or even waiting for an occasion to criticise. The fact that he chose the opposite attitude reveals a lot about his personality. A seasoned politician, and a very shrewd and skilful one, José Gago was not interested in the political game for its own sake. Politics, in his mind, was nothing more than the only possible way to cause the adoption and implementation of policies able to help reach his objectives as regards what really mattered for him: the advancement of science and the strengthening of this democratic, open, and equitable society he fought for in his country as a student during the last years of the Portuguese authoritarian regime, which was overthrown in April 1974.

An electrical engineer and physicist by training, José Mariano Gago, after a few years in research, shifted to the area of science management and science policy, where he exercised major responsibilities at national level. They culminated in his appointment in 1995 as Minister for Research, a position he held for more than 12 years in four governments. Throughout his mandates, he completed an ambitious programme of reform, modernisation, and internationalisation of the whole Portuguese research and university system, the results of which constitute undoubtedly his major legacy: if Portugal possesses today a modern research and university system, it is largely thanks to him and, in particular, to the very clever and determined way he used in combination the EU Research Framework Programmes and Structural Funds to upgrade the level of Portuguese research laboratories and staff, and fully integrate them in the European science community.

To José Gago, Europe was indeed both the key to the reinforcement of national research systems and a natural dimension of international cooperation. All his life, CERN, the intergovernmental European research organization in particle physics, where he worked as a young researcher, remained for him both a model and a powerful source of inspiration. At the EU level, Gago was instrumental in the launch of the two most important science policy initiatives of the previous decade: he contributed to the adoption of the European Research Area project proposed by Commissioner Philippe Busquin, endorsed in 2000 at the Lisbon European Council at a moment when Portugal held the rotating Presidency of the European Union; and as chairman of the Initiative for Science in Europe platform, he campaigned forcefully for the creation of the European Research Council (ERC), the funding agency for basic research at EU level.

Especially interested in issues such as human resources for research, social sciences, the training of scientists, science education, and the public’s knowledge of science, he also fought indefatigably to ensure that such subjects would be addressed by policymakers with the seriousness they deserve. Soon after his appointment as minister, he launched in Portugal a programme aimed at promoting scientific culture called Ciência Viva, which remains today as one of the most long-lasting and successful undertakings of this kind in Europe. A few years before, he had been involved in the preparation of European Week of Scientific Culture, a framework for transnational projects in the field of public understanding of science initiated by the European Commissioner Antonio Ruberti. Later, he would successfully struggle for the inclusion of a substantial programme of socio-economic research in the Fifth EU Research Framework Programme, co-publish a book on the theme of science and schools in Europe, chair the EU High Level Group on Human Resources for Science and Technology which issued the report Europe needs more scientists, and present to the Council of Ministers, together with his colleague from Luxembourg, a series of proposals on scientific careers and mobility of researchers in Europe. Even after he had left the government, José Mariano Gago remained very present in European circles. A sought-after speaker and lecturer, he was a familiar figure at conferences, seminars and workshops, highly appreciated for his broad knowledge and the profundity of his ideas.

Gago’s views on European science policy didn’t coincide completely with those which prevailed in the European institutions. Curiously for someone from a small southern country, he didn’t trust much the European Commission. As it emerges from the preface he wrote to the book The future of Science and Technology in Europe, which stemmed from an informal meeting organized in 2007 at a time when Portugal had again the Presidency of the European Union, in his mind, national governments should be, not only the ultimate deciders in matters of European scientific affairs, but also the major actors in the process of building a scientific Europe. His unease with the European Commission as institution didn’t preclude him, however, from maintaining good relationships with Commission’s people, among whom he counted several close friends.

This real, or apparent, contradiction was not the only one in his life. In private a very warm, kind, attentive and courteous person, extremely perceptive and full of psychological insight, finesse, charm and humour, José Gago could also be sharp in political discussions and was not always the easiest person to work with. Too proud for vulgar boasting, he sometimes couldn’t hide how aware he was of his intellectual power and the value of what he had achieved. This is not uncommon among strong personalities and gifted people, and José Mariano Gago was undoubtedly both. ‘José Mariano’, wrote rightly the Portuguese journalist and political commentator José Victor Malheiros,‘belonged to the very restricted number of persons … unable to speak in public without saying something substantial and interesting, which forces one to think’. Exactly the same could be said about private conversations with him. He was also a true humanist. ‘Happy the country’, wrote Rosalia Vargas, President of Ciência Viva, ‘that has had a minister for science and technology who could talk (at the occasion of a visit to Goa) about Garcia de Orta (referring to a Portuguese Renaissance Jewish physician, herbalist and naturalist who lived in India)’. As a matter of fact, the curiosity of José Gago, an uncommonly erudite and cultivated man, extended far beyond science, even science from past centuries, enabling him to quote the historian Jacob Burckhardt and the novelist Patricia Highsmith in a speech before the European Science Foundation (ESF), or to make observations about the philosophers Bertrand Russell and José Ortega y Gasset in private correspondence.

The unexpected death of José Mariano Gago, who disclosed the cancer he was suffering from only to a limited number of relatives and very close friends, resulted in a wave of vibrant tributes and personal, often moving, testimonies of an impressive magnitude, astonishing even for those who knew how highly appreciated and admired he was. The homage was obviously massive in Portugal, where he is largely considered a hero by the scientific community. But contributions came also from international organizations like UNESCO and OECD, and many from European bodies: CERN, the European Space Agency (ESA), the ESF, the ERC, the European Commission through the voice of Commissioner Moedas, the European Cancer Organization (ECCO), to which he was adviser. Considered together, these comments highlight the major role he played in shaping a series of initiatives in different areas of European scientific cooperation and, maybe above all, in the thinking on European science policy.

Building a true ‘research Europe’ is a long and complex process far from being completed, a collective transgenerational undertaking to which many people contributed: European Commissioners and EU civil servants, scientists, but also national science administrators and ministers for research, some to a particularly remarkable degree. The most outstanding example is the French Hubert Curien, who, in various capacities, has been involved in almost all initiatives of European cooperation in science and technology launched during the past 50 years; another one was his colleague Heinz Riesenhuber, whose name is attached to the criteria tailored to identify subjects suitable for funding at European level according to the subsidiarity principle, which dictates that decisions should be taken at the lowest possible level. Both have been ministers for many years. In the Council of Ministers, due to their experience, their reputation, their achievements and their strong European commitment, they were casted as ‘wise men’ to whom everybody listened respectfully. One generation later, José Mariano Gago inherited this role of most senior and famous member of the Council: an often opinionated man, but highly knowledgeable, experienced, intelligent and imaginative. To all participants and observers alike, it was obvious that José Mariano Gago, to borrow an accurate expression used by the Director-General for Research and Innovation Robert-Jan Smits about him, was much more than ‘just another minister’. It is as such that he will be remembered, in Portugal, but also in Europe and European organizations, by all those to whom European science policy matters.

The writer is a former advisor to the European Commission’s Directorate-General for Research and Innovation.