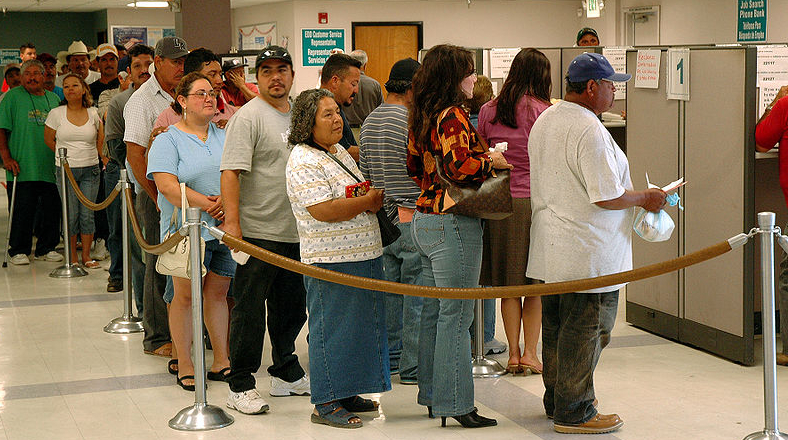 People who are unemployed in the US had more mental health consequences than their European counterparts. Image credit: ‘FEMA - 29783 - Workers unemployed by the freeze in California’ by Michael Raphael is in the public domain

Being laid off can be one of life’s most emotionally traumatic experiences, but new studies show that, for some, losing work during an economic crisis can lead to lasting physical consequences.

‘The effects of recessions might not just be temporary or immediate, but may actually lead to changes in social circumstances that leave a scar affecting people’s health later in life,’ Dr Mauricio Avendano of King's College London, UK, explained.

Dr Avendano heads the HEALTHCYCLE project, funded by the EU's European Research Council, which used health and mortality data from European countries and the US to track how recessions over the last 40 years affected wellbeing later in life.

His team found that the age of the most affected groups differed by gender. In particular, men between 45 and 49 who were impacted by a recession had higher rates of disability and poorer health decades later.

That may be because workers close to 50 have a much more difficult time returning to the labour market once they have left it. The researchers found evidence that such men ended up smoking and drinking more than those who were not affected by a recession.

Those results were even more striking for women who experience downturns between ages 25 and 34.

Using tests for functions like memory, orientation, and the ability to live independently, the researchers found that such women experienced a greater mental decline with age than those not affected by recessions. That may be because women around those ages are more likely to have children earlier and leave the labour market during poor economic times.

For Europeans, the good news is that better social welfare protections like maternity leave and unemployment benefits appear to shield from some of the negative health effects of job loss.

Dr Avendano and colleagues found that women who have gaps in their career due to maternity leave or training actually ended up having better cognitive function. ‘We found that women who had their first child under generous maternity leave benefits, usually 12 weeks or more, ended up having better mental health much later in life.’

Comparing data between the United States and Europe, the researchers found that job loss had fewer mental health consequences for European workers than for their American counterparts.

‘Those who suffered job loss under a regime with higher unemployment benefits, ended up suffering less from job loss in terms of their health and the risk of suicide,’ Dr Avendano said.

‘When you enter the labour market in a recession, it can have a persistent impact on your wages.’

Health economists are still figuring out the full consequences of recessions, which for a long time were assumed to benefit population health in the short run. Lower economic activity leads to fewer traffic accidents and lower air pollution levels, as well as less risky behaviour like smoking and drinking alcohol.

‘We know that, in the short run, recessions are actually good for health at the population level. Basically population rate mortality, suicide rates excepted, tend to decline,’ said Dr Mathilde Godard of Vrije Universiteit Amsterdam in the Netherlands.

But Dr Godard is also focused on the outsized impact recessions can have on certain groups. In the EU-funded RECESSIONSHEALTH project, which started earlier this year, she plans to look at the impact that graduating in a recession has on health.

‘When you enter the labour market in a recession, it can have a persistent impact on your wages. You can have more unemployment spells along your career, and this may in the end turn into lower health,’ she said.

Working with data from the 1990s Swedish banking crisis, which is somewhat similar to the 2008 financial crash, she hopes to show how a recession can alter such new workers’ health up to 20 years after graduation.

Another area she plans to look at is the effects of job loss on otherwise healthy employees, which can be hard to prove, as unhealthy workers are often targeted for redundancy and can skew the data.

To find such a control group, she plans to look at budget cuts to the cultural sector in the Netherlands after the financial crisis, which went into effect in 2013.

‘The cultural sector lost maybe 25 % of their budget because of those cuts, so a lot of institutions had to lay off a lot of people. Some institutions actually had to close their doors. They didn’t really have time to look at private funding or anything so it came as a surprise, and this also came as an exogenous shock to people … not necessarily because they were not healthy,’ Dr Godard said.

Looking at such groups can help reveal more of the patterns for how job losses effect health further down the line.

‘Whatever cognitive function or physical function people have when they are older, it really doesn’t depend much on what is happening at that moment but it much more depends on what happened to them 10, 20, 30 years back,’ Dr Avendano said.