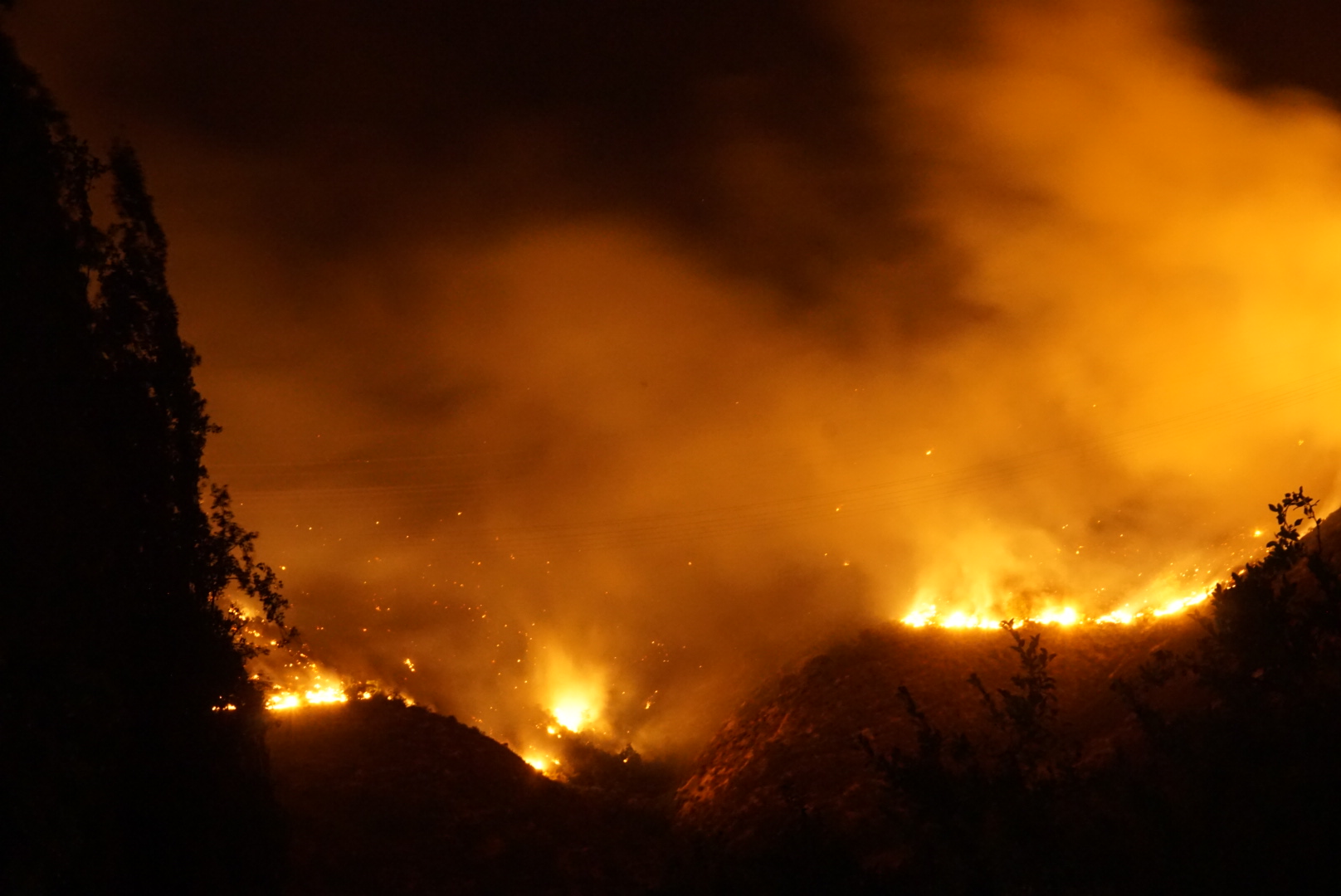 The 2017 Chilean wildfires, along with those in Portugal, were confirmation that the new type of fire was here to stay. Image credit - Pablo Trincado, licensed under CC BY 2.0

We’re fighting a different kind of wildfire whose behaviour experts are struggling to predict.

Climate change and negligent forest management are causing higher-intensity, faster-moving fires that can generate enough energy to evolve into erratic firestorms, known as pyroCbs, in the face of which first responders can do little.

‘Traditionally we could predict the fire behaviour and the direction of the fire but under those conditions and those moments it’s not possible,’ said Marc Castellnou, president of the Spanish independent wildfire prevention group Pau Costa Foundation.

As a wildland fire analyst with the Catalan fire services, Castellnou reconstructs wildfires using simulations, satellite, on-the-ground and other data.

This wildfire shows a different behaviour than those of the past, he says. 'It eats everything.’

While these fires are rare, when one strikes it can generate 100,000 kilowatts of energy per metre. In firefighting terms, this is 10 times what a firefighter can handle, but even at 4,000 kilowatts, firefighters cannot go near the flames and require aerial support. ‘The old way of fighting fires by sending firefighters – that’s gone,’ Castellnou said.

There have been signs of trouble since the 1990s, according to Castellnou.

‘This change has been cooking for a long time, but the first time we realised something wrong was happening were the years 2009 and 2012,’ he said, referring to the Black Saturday bushfires in the Australian state of Victoria that killed 173 people and wildfires in Spain, Portugal, Chile and California, US. Many in the fire community initially thought these were just abnormal events, he says.

But then wildfires in Chile and Portugal in 2017 indicated that those weren’t simply extreme years. ‘That was the new normal arriving. 2018 has confirmed that,’ he said, referring to the deadly wildfires in Greece and in California.

On October 15, 2017, Castellnou was in central Portugal to conduct analysis then support the local services as the wildfires became firestorms.

'What I saw was the pace of the fires ... You think: “Well that cannot be real.” When you go there (and see the damage) you understand that that is the reality,’ he said.

Castellnou, who spoke about the future of fighting wildfires at the EU’s security research event in December 2018, first joined the Catalan fire and rescue services as a seasonal firefighter when he was a teenager. In the past, he says, a fire that destroyed 25,000 hectares a day was considered extreme. According to his figures, the October fires in Portugal consumed 220,000 hectares of forest, an area 22 times the size of Lisbon and killed more than 40 people. Castellnou says that at their peak, wildfires burned at a rate of 10,000 hectares per hour over seven hours.

‘This is something that blew my mind and I cannot use technology to simulate that because models can’t predict it,’ he said. The challenge is now predicting how they will behave, he says. ‘We’re still not there. We’re struggling.’

Wildfire experts say that climate change, causing a long-term rise in temperature and less rainfall, is creating unprecedented flammable conditions that are making forests burn with more intensity. Wildfires now occur in the wintertime and affect regions in latitudes beyond the fire season-prone countries of Spain, Greece, Italy, Portugal and France. Castellnou says that wildfires are expected to affect highly populated areas like central Europe.

‘Last summer, it was the first time in history we were having wildfires in (nearly) every single country in Europe,’ he said.

‘It’s not that climate change will create these new scenarios. No, no. The new scenario is already here, and it has come a lot faster than expected.’

According to experts, urbanisation and poor forest management for reducing fuel – the grasses and shrubs that fires feed on – are also to blame.

David Caballero, who also spoke at the security research event, assesses the wildfire risks in populated areas, focusing on the wildland-urban interface, where infrastructure and urban development intermingle with forests and other wildlands. He is contributing to a project called Clarity that is working to join up different IT systems to protect cities and infrastructures from the effects of climate change.

‘We have to be prepared. Whenever we have forest in Europe, we eventually will have forest fires,’ he said.

He travelled to the seaside village of Mati, Greece, in the immediate aftermath of Europe’s deadliest wildfires last year which killed 99 people in the region of Attica. Speaking to firefighters and survivors, he learnt that many people did not expect the fires to cross the highway that runs parallel to the coast. In the past the fires had halted at this point, but this time they leapt across, burning through Mati.

‘There was an enormous amount of fuel due to the lack of management for 40 years,’ he said. The fires tore through the village and reached the coast in just 20 minutes.

Caballero says that all along the Mediterranean coast, unregulated construction with little regard for safety and evacuation routes and lax vegetation management mean that more places are at risk. He says local and regional authorities can no longer afford to be negligent. ‘We are living surrounded by fuel,’ he said.

Pau Costa Foundation, established to speed up the sharing of information and know-how between fire services and society, works on a number of prevention campaigns. For a project called Heimdall, set up to contribute to an EU-wide information system about fires and other emergencies, the foundation is ensuring that the general public has a voice in shaping it.

One of the foundation’s aims is to change the social perception of wildfires. A tendency to fight every fire, small or large, has let landscapes thrive artificially, Castellnou says. ‘Not all fire is bad,’ he said. By clearing old trees, fires can make way for the growth of new forests that are adapted to climate change.

Smaller fires, through activities such as prescribed burning, also have a role to play in creating scars in the land which break up a bigger fire’s path. ‘A mosaic of landscape of different ages and low-intensity fires is the best protection against the big fires,’ he said.

Oriol Vilalta, director of the foundation and a volunteer firefighter, says with wildfires killing more people in Europe, causing more than 200 deaths in the past three years, it’s time we learnt how to coexist with them.

‘We need to create a culture of risk. The Japanese know very well what to do in case of an earthquake, but we don’t know what to do in Europe with fires,’ Vilalta said.

In the past, the tendency was to evacuate people, but the general public must become part of the solution through self-protection, he says. ‘(That’s) what to do and what not to do, where to stay and where not to stay in case of a fire.’

The research projects in this article are funded by the EU. If you liked this article, please consider sharing it on social media.

What can be done? The expert view

Create an EU-wide programme to teach people how to live with wildfires and manage landscapes, similar to FireSmart in Canada or Firewise in the US.

Establish long-term or permanent research structures to understand our future with fire.

Help municipalities, firefighters and communities work together to raise awareness and knowledge about wildfire risks and how fires behave.

Reduce the vegetation that makes forests flammable, so fire and rescue services have the capacity to fight fires.

Create an incentive to clear vegetation, such as constructing buildings from wood or using biomass to heat public buildings and hospitals.

In the case of a fire, provide clear information for residents about when to evacuate and when to stay in their homes.

Sparking firesmart policies in the EU