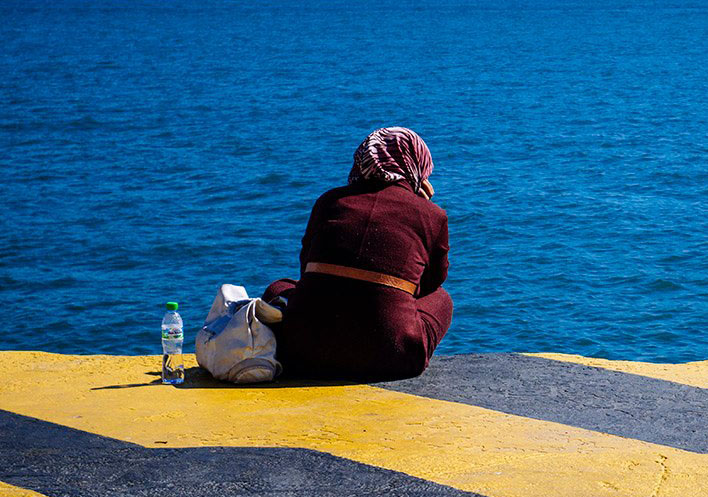 Most of the research on migrants entering the EU has focused on men. Image credit – Agelos Kalodoukas

The plight of a growing number of female migrants remains undocumented as studies focus primarily on men, despite the fact that women are often more vulnerable, dealing with unwanted pregnancies, sexual assault and associated illness and mental health problems.

‘Women are invisible,’ said Professor Vanessa Grotti, who is studying maternity care services and undocumented motherhood on the borders of Europe as part of the EU-funded EU Border Care project.

‘Women have been understudied, remain invisible to research and policymaking and are difficult to (look) after.’

As part of their work, her team has been photographing what happens to female migrants when they arrive in EU.

In Greece, locals have used their own money to refurbish an old school with places to sleep, a kitchen, a play area and a classroom for migrants from Iraq and Syria. These locations are filled with the poignant mementos of the people who pass through, like a small paper boat, recalling the treacherous ocean crossing many of the migrants make to get there.

Nevertheless women ‘remain vulnerable, especially in these temporary housing and hospitality structures,’ said Prof. Grotti, who is based at Italy’s European University Institute.

Many of these migrants were professional people whose lives have been put on hold due to the desperate plight of their war-torn homelands.

‘Most of (the) refugees are Syrian … (who) belong to middle to higher classes, they’ve got above-average education levels, so most are graduates, they have master’s (degrees), some have had to interrupt PhDs – so they’re highly educated (people) who still end up stuck in refugee camps, which increases the stress and frustration,’ said Prof. Grotti.

Many have made the treacherous crossing to Europe in small inflatable boats, not only from the Middle East but also from sub-Saharan Africa and south Asia, and have often been plucked directly from the waves by Italian naval helicopters on patrol.

The Italian navy brings the migrants to Lampedusa, where they are met by the island’s only ambulance, which means trips need to be carefully planned out by the local paramedics.

As Lampedusa is the Italian land closest to the Libyan coast, more than 250 000 migrants have come through since the late 1990s and over the last few years the proportion of women has increased to 25 %.

The number of gynaecologists on the Italian island has doubled in recent years as the share of women entering who are pregnant has risen to 8 %.

The migrants are vulnerable particularly when they are pregnant as their healthcare has not been properly managed. ‘If you look at sheer numbers, complications at birth and pregnancies are the first cause of hospitalisation among undocumented and documented women (refugees) in Europe, which is not the case for EU citizens,’ said Prof. Grotti.

Nurses like this one have dedicated their time and energy to helping pregnant women who are migrating.

‘It’s an exceptional crisis, but it’s going on for many years so this exceptionalism has become the norm,’ said Prof. Grotti.

Maternity care needs to be given in unconventional ways, such as in portable clinics provided out of the side of a Red Cross van.

‘We have a lot of unwanted pregnancies. (For example) women ... in prisons for a long time ... (would have to give) sexual favours in exchange for food or specific medication, for example,’ said Prof. Grotti.

This often leads to mental health issues by the time women reach the EU, which is why psychologists like Paola in Italy volunteer their holiday time to work for non-governmental organisations (NGOs). Before this photo was taken, she had just finished counselling a 13-year-old from Iraq who had attempted suicide.

The researchers have organised a number of photo exhibitions as part of their work, and they hope that by highlighting the stories of these women they can raise their visibility among policymakers and strengthen the level of care they receive.

‘Safety does not start (even) when they cross the European border,’ said Prof. Grotti. ‘More needs to be done to ensure that these women are safe.’

These images form part of an exhibition at the Université Libre de Bruxelles in Belgium until June 2017.