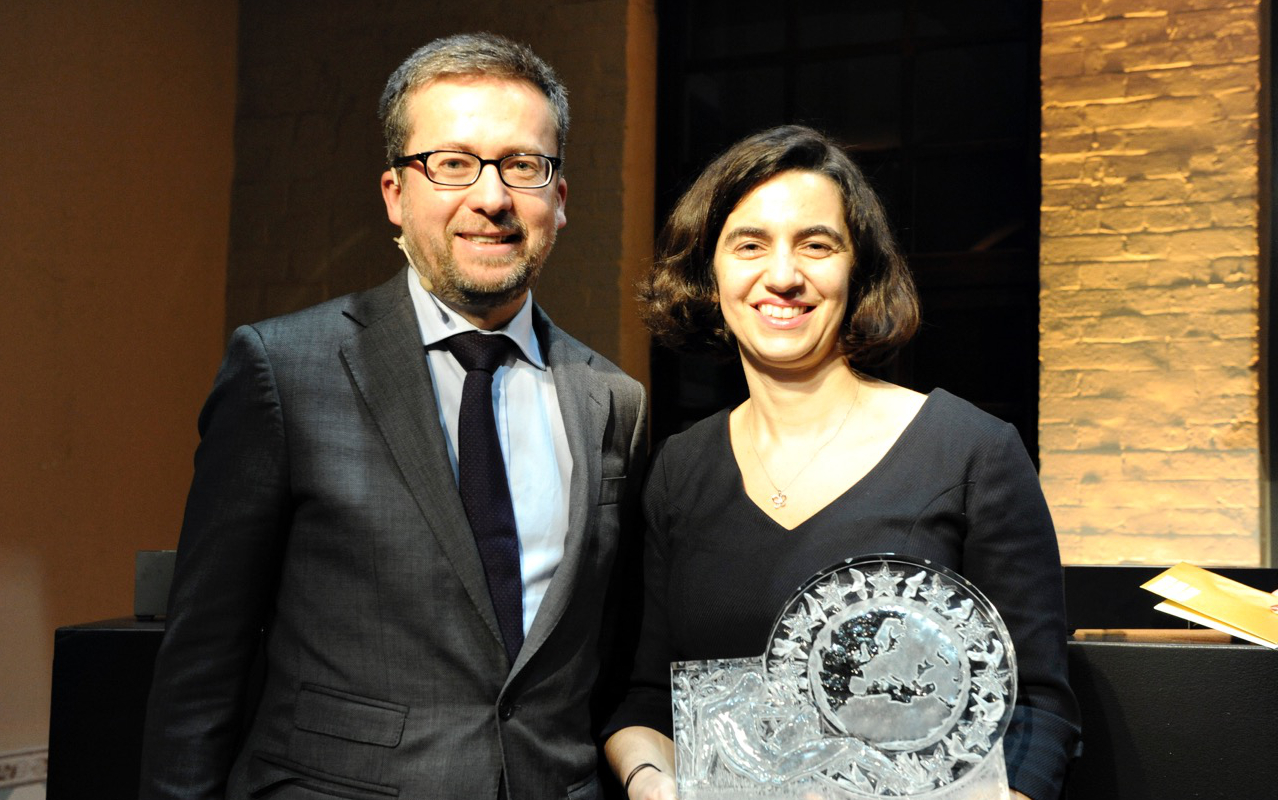 Dr Susana Sargento, co-founder of Portuguese company Veniam, which turns city vehicles into wifi hotspots, has won the EUR 100 000 first prize in the EU Prize for Women Innovators 2016, which was awarded at a ceremony in Brussels, Belgium, on 10 March.

‘This is not only a prize for myself but a prize for all the team,’ said Dr Sargento, accepting the award from Carlos Moedas, European Commissioner for Research, Science and Innovation. ‘I hope that with our network that we’ll be able to have very smart cities everywhere very soon.’

The idea behind Veniam is to use vehicles such as taxis, buses and garbage trucks to build a communications network in order to expand wireless coverage within cities and create a so-called internet of moving things.

Dr Sargento co-founded the company in 2012 as a spin-out from the Portuguese universities of Aveiro, Porto and the Institute of Telecommunications, and is backed by companies such as Verizon Ventures and Cisco Investments.

She has four patents and 30 publications to her name, and has been involved in a number of EU-funded research projects including FUTURE-CITIES, which helped to network more than 600 vehicles in the city of Porto, Portugal.

The EU’s Prize for Women Innovators award is designed to give public recognition to female entrepreneurs who have successfully turned scientific research into a business.

‘I am pretty convinced that 2016 is going to be the year of women in the economy.’

‘Recognising women’s contribution to science and society is something we need to get a lot better at,’ said Commissioner Moedas, who presented the three prizes of EUR 100 000, EUR 50 000 and EUR 30 000 to the winners.

‘Whether it’s the Oscars or Nobel Prizes, women deserve to be recognised equally. I am very proud that the EU provides the biggest prize for women (researchers who become) innovators in the world today. And I hope that soon, such prizes will be normal and not exceptional, as today.’

Dr Sargento said that the award meant a lot from both a professional and personal point of view. ‘From one side there is the recognition, someone else recognises what we are doing. From the other side there is also confidence, so we get this stronger boost (and can say) ok let’s move forward, let’s continue, let’s think about the next stage.’

The second prize was awarded to Professor Sirpa Jalkanen, co-founder of the publicly listed Finnish companies BioTie Therapies and Faron Pharmaceuticals, which build on her discovery of molecules that could be used as drug targets to prevent harmful inflammations and the spread of cancer.

‘I would really encourage to continue this type of prize because it really gives visibility to women, at least in European circles but also globally,’ she said.

‘As a group we’re showing Europe and the world that there’s a lot to be done with encouraging women into science and technology,’ she said. ‘I think everybody in the competition is a good role model for that.’

The awards ceremony followed a so-called Citizens’ Dialogue entitled Women Innovate, Europe Gains, where members of the public met Commissioner Moedas to talk about gender equality and the role of women innovators in society.

During the event, Commissioner Moedas emphasised the importance of diversity in innovation.

‘One of the things that sometimes CEOs have a tendency to do, is to hire people like them because you can get things sorted quicker. (But) innovation is tough, it hurts, it is difficult. If someone very different from me … tells me a truth that I don’t want to hear it’s tough - but it’s good. At the end of the day, the result is better.’

The EU’s She Figures 2015, which set out the current state of gender equality in research and innovation in the EU, found that while women made up a third of researchers in all sectors in 2011, they only accounted for 19.7 % of researchers in the business enterprise sector in the same year.

The report, which was published in full on 10 March, also found that women are two times less likely than men to work in the business enterprise sector, and that just 9 % of patent applications in the EU between 2010 and 2013 registered a woman as the inventor.

Commissioner Moedas said: ‘If you want to be competitive, you have to have diversity. That’s why gender equality, it’s just economic sense. It’s of course about justice and fairness, we all know that. But apart from that it is our job because if we want to compete with the other parts of the world, we need that.’

However, Saskia Van Uffelen, chief executive of Ericsson Belux, who also spoke at the event, said that she was convinced that 2016 would be the year of the female chief executive.

There were 64 entries to the 2016 EU Prize for Women Innovators award, which is in its third edition following competitions in 2011 and 2014. In order to enter, participants should have founded or co-founded a company with a turnover of at least EUR 100 000 in 2013 and 2014, and their research must have benefitted from EU funding.

The entries were whittled down to a shortlist of 21 and then nine by an independent jury made up of representatives from venture capital, entrepreneurship, business angels, academia and corporate leadership, who then settled on three winners.

The idea behind the prize is to inspire other women to follow in the footsteps of the prize-winners.