Indoor farms could fine-tune the flavours of our food 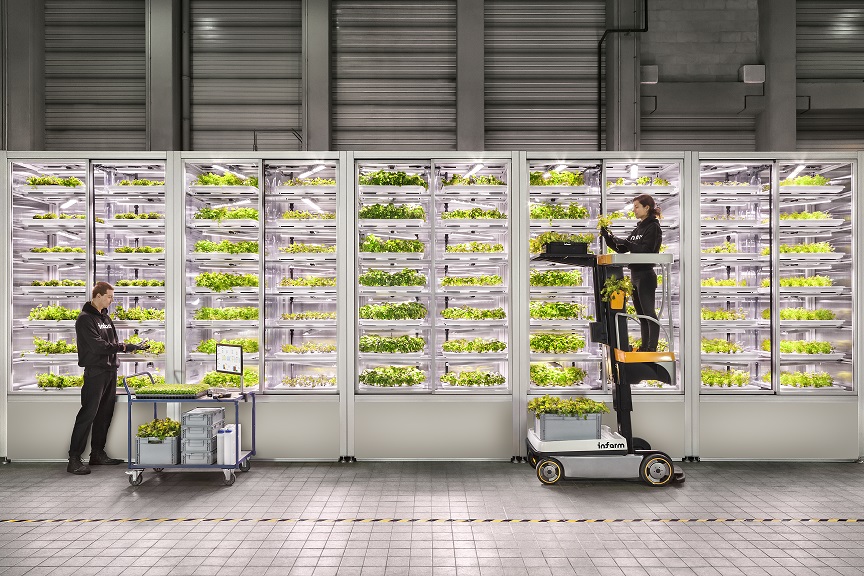 In the future, produce could be grown directly in supermarkets or restaurants. Image credit - infarm

A new way to farm indoors using different wavelengths of light could boost the taste of fruits, salads and herbs, while also increasing food supply and nutritional value.

Growing food inside brings many benefits to farmers by reducing the amount of land, fertilisers, energy and water needed to cultivate the plants.

But it can come with a major drawback – produce grown indoors sometimes lacks the depth of flavour it would have if it was allowed to flourish and ripen outside.

And it is the controlled environment of indoor farming itself that seems to be at least partly responsible.

‘A plant that grows outside is stressed,’ said Alexander Penzias, co-founder of Ponix Systems, an agriculture company specialising in indoor farming based in Vienna, Austria.

Extreme temperatures, hailstones, torrential rain or too much shade all produce stress that affects the growth rate of food. But these trying moments also force plants to produce phytochemicals, the active compounds that give fruit and vegetables their distinctive flavours.

Despite increasing yield, the carefully controlled climates used in indoor farming do not stress the plants enough for them to produce these flavoursome phytochemicals.

This is bad news for taste. But it is also a weakness that could prevent this form of sustainable food production ever achieving widespread acceptance by consumers.

Indoor farming techniques like greenhouses and hydroponics systems, a soil-free system that uses artificial sunlight, also produce fewer greenhouse gas emissions than traditional agriculture. But if consumers are not willing to buy food produced in this way, the environmental benefits will be impossible to realise.

‘If you have plants that come out of a hydroponic system, it is not a case of them tasting good or bad, it is that they don’t have a taste at all,’ added Penzias.

His team, however, have focused on tuning light emitting diodes (LEDs) to produce specific wavelengths of light that encourage indoor plants to release phytochemicals.

They have developed this into a series of light recipes for specific plants that not only enhance flavour, but allow it to be tuned. Amber light, for example, can increase the flavour of basil, while ultraviolet light can boost the taste of tomatoes and also make salad leaves thicker and therefore more palatable.

On top of that, it can also boost the health benefits of the food.

‘If it tastes better, it means it has a higher nutritional content,’ said Penzias. Many phytochemicals can be classified as antioxidants, which are good for heart health and the immune system, he added.

Ponix Systems are currently conducting a feasibility study of their LED technology as part of the flexiLED project. Once it is completed, they hope to team up with researchers and farmers to develop a commercial product.

Currently, the indoor farming company specialises in a hydroponic system called Herbert, which are stackable modules that can be installed on walls in homes or larger premises like offices or restaurants. They have already installed some of these modules in a school and a hospitality academy in Austria.

‘At first the cooks were sceptical of the system,’ said Penzias. ‘But as soon as the cooks started harvesting the food, the flavours were more intense than what they expected.’

'As soon as the cooks started harvesting the food, the flavours were more intense than what they expected.'

Ponix Systems are planning to introduce their new light recipe technology at the school within the next few months and at the hospitality academy soon after that. The chefs there are already eager to tune the flavours of their indoor-farmed food.

This is significant achievement, Penzias believes, because overcoming the scepticism of notoriously picky chefs is a good insight into the challenge of convincing the public.

‘When consumers hear the term hydroponics they are immediately scared,’ said Penzias. He said the term can often sound too technical or chemical to appeal to environmentally conscious shoppers.

But one indoor farming business based in Berlin, Germany, may have found the secret to successfully addressing the taste issue on a large scale in Europe.

Infarm offers supermarkets monthly subscriptions to rent an indoor farming system alongside their optimising growing services, such as algorithms that determine the most efficient use of light, water and nutrients. They also use specific wavelengths to enhance the flavour of the plants they grow.

Martin Weber, chief financial officer at Infarm said: ‘We are really able to show that people are buying our produce and prefer it over existing stuff that is out there.’

Infarm produce has already been used by Michelin star chefs in Germany, while their indoor systems have been installed in other restaurants and a Berlin supermarket, which allows the retailer to sell the produce grown directly to its customers.

‘Normally, they are buying at a specific margin for a lot of produce, but they throw away a big amount of it,’ said Weber.

At the same time, it eliminates the costs of importing salads or herbs from other parts of the world, greatly reducing the environmental impact.

Infarm’s technology is now being used in over 50 Berlin supermarkets and they are planning to expand to Paris, France, in August and then to London, UK, soon after. Their first farm in a French supermarket will also be their biggest one yet. Covering 100m2, it will produce five tonnes of herbs, allowing the retailer to become self-sufficient for this commodity.

‘The food we are consuming is travelling too far and its carbon footprint is devastating for the world,’ added Weber. ‘(In the future) we will be growing a lot of food in cities, or closer to the cities.’