Hydrogen use doesn’t emit carbon but its production often does. That could soon change 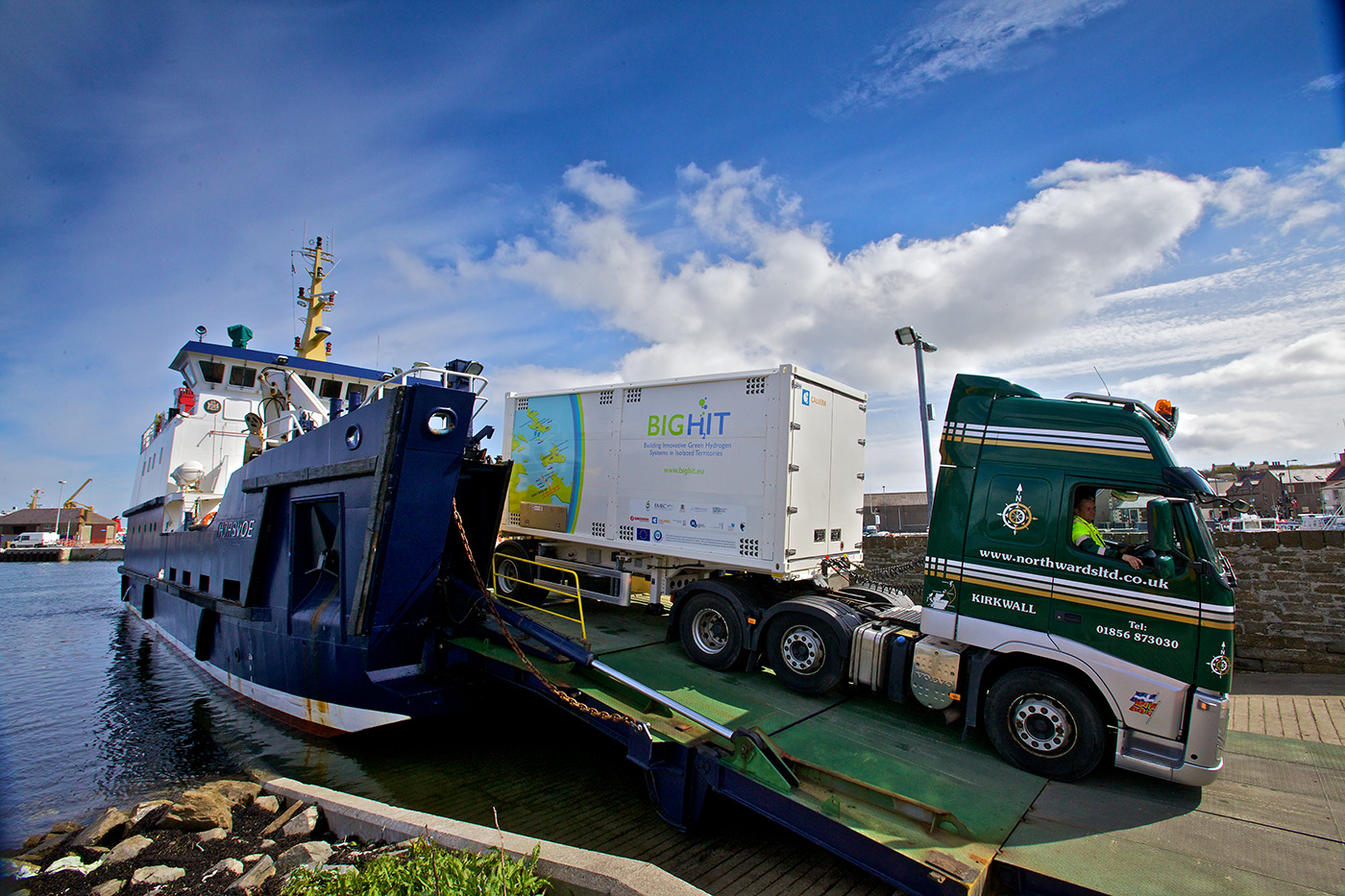 Hydrogen can be used to power cars, supply electricity and heat homes, all with zero carbon emissions. The snag is that the vast majority of hydrogen itself is derived from fossil fuels – a fact that scientists are now hoping to change. They plan to clean up production to kickstart a dedicated economy – something that has already found small-scale success in Scotland’s Orkney Islands.

By generating hydrogen from electrolysis, biogas, or within solar reactors, these scientists are hoping to encourage the uptake of a clean hydrogen economy. In such an economy, hydrogen would be used to store the energy from renewables during periods of peak production, and then release it as electricity whenever – and wherever – demand is high.

‘The production of hydrogen from processes with a low or zero carbon-footprint is at the core of developing the hydrogen economy,’ says Dr Souzana Lorentzou of the Centre for Research and Technology Hellas in Greece, and the scientist responsible for a project called HYDROSOL-PLANT.

Hydrogen ticks a lot of boxes as a green fuel and energy carrier. It is carbon-free, non-toxic, and can be used to generate heat or electricity wherever it is needed – at fixed locations such as homes, or in electric vehicles – leaving behind only water vapour as a by-product.

The trouble is how to make it in the first place. Most hydrogen today is generated by heating coal and natural gas with steam, but that process emits a lot of carbon dioxide, nullifying hydrogen’s eco-credentials.

‘The production of hydrogen from processes with a low or zero carbon-footprint is at the core of developing the hydrogen economy.’

The ideal solution would be to generate hydrogen at the site of other renewables, such as wind farms and solar arrays when they are generating enough energy. Besides giving hydrogen the green stamp of approval, this would provide a convenient back-up source of energy when there isn’t any wind, or the sun doesn’t shine.

The project involves generating hydrogen inside a solar tower, which receives sunlight concentrated by about 100 mirrors angled around it. Such towers normally produce electricity by heating water to drive a steam turbine, but Dr Lorentzou and her colleagues have instead been using the heat to drive a chemical reaction that splits water into its constituent elements, oxygen and hydrogen.

Making this reaction feasible at anything but the highest temperatures involves the use of a metal oxide, which in the past was ground up into a powder. Dr Lorentzou and her colleagues have instead opted to craft the metal oxide in big monoliths composed of networks of channels and pores, which they believe will be more effective.

In earlier work, the researchers successfully demonstrated in the lab that hydrogen can be generated by concentrated sunlight in this way. They have gradually scaled up their experiments from a few to several hundred kilowatts in thermal power.

‘Scaling up things is inherently challenging, (as) a process that has been optimised and operates successfully at the laboratory scale may turn (out) to be unsuccessful or problematic at the larger scale, and (thus) require redesigning,’ Dr Lorentzou said.

Most recently, the researchers attempted to repeat their success in a real-world scenario for the first time by adapting an existing solar tower, the Plataforma Solar de Almeria in Spain, to their needs. They managed to produce some hydrogen, but not as much as they had hoped, because they could not generate sufficiently high temperatures.

‘The result gives a taste of the potential of the process which, although promising, needs further development,’ Dr Lorentzou said.

In any case, not everywhere is sunny enough to make hydrogen in this way.

Professor Debora Fino of the Politecnico di Torino in Italy believes that biogas – the gas produced by decomposing organic waste, composed mostly of methane – is a strong alternative.

In a process known as oxy steam reforming, biogas can be turned into hydrogen in the presence of heat and steam, similarly to how hydrogen is already generated from fossil fuels. Unlike the fossil-fuel method, however, oxy steam reforming relies on an ecological source, and a lot of the heat is generated by itself as the biogas oxidises.

The challenge is to design a commercial system that is efficient and sufficiently compact that it can be installed wherever biogas is readily available. In their current project, BioRoburplus, Prof. Fino and colleagues are going some way to achieving this with a pre-commercial device, whose efficiency is boosted with high thermal integration and purified gas streams.

Hopefully, says Prof. Fino, they will be able to demonstrate that hydrogen can be generated efficiently from biogas in a compact device, to help usher in the hydrogen economy.

‘Although,’ she adds, ‘there is still a necessity for (this) production technology to be made economically feasible.’ 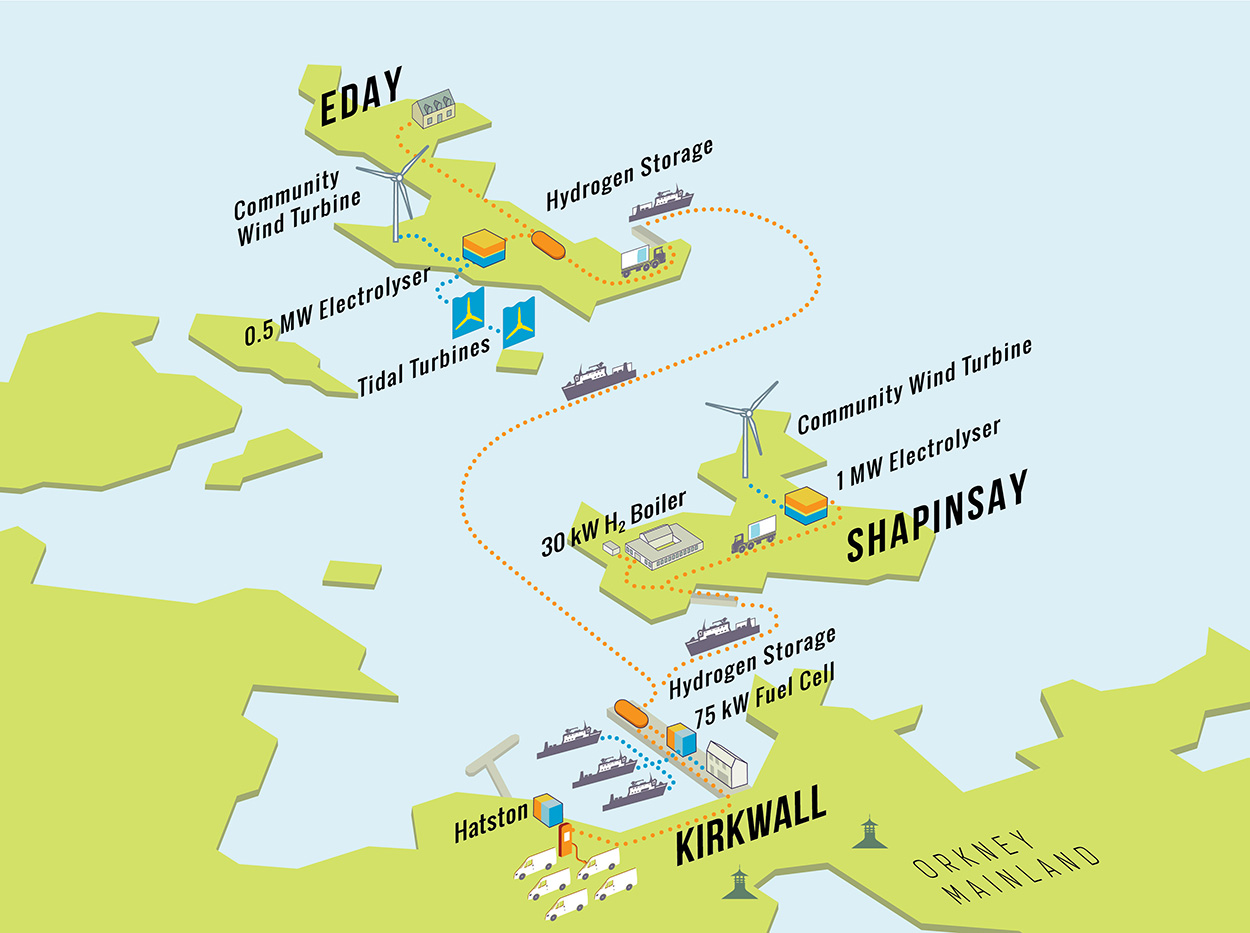 In fact, a small, self-contained hydrogen economy – what some prefer to call a hydrogen territory – is already under development, in the Orkney Islands of Scotland through a project called BIG HIT. There is so much wind and tidal energy available that the excess is already being used to generate hydrogen, via a process known as electrolysis.

In electrolysis, water can be directly split into oxygen and hydrogen by running an electric current through it. Both the islands of Eday and Shapinsay in Orkney have electrolysers - one megawatt and half a megawatt capacity, respectively - connected to their wind and tidal generators, and the resultant hydrogen is stored in high-pressure mobile containers which are then transported by boat to Mainland, Orkney.

Once there, the hydrogen can be converted back into either heat or electricity for the harbour buildings, or for powering a fleet of zero-emission hydrogen vehicles. Work started in July on a project called HySeas III to build the first sea-going ferry to be powered by clean hydrogen. Some 50 tonnes of Orkney hydrogen is expected to be produced and combusted each year.

‘The work in the Orkney Islands has been recognised as one of the leading examples of the hydrogen territory approach,’ says Dr Nigel Holmes, the CEO of the Scottish Hydrogen and Fuel Cell Association, a partner on the project.

The principal challenge of BIG HIT is getting all the different elements across the entire hydrogen value chain - supply, distribution and end-use - to work together and in synchrony - a first for anywhere in Europe. Production must be coordinated with the renewable resource availability and hydrogen demand. There also has to be suitable transport and places to store the hydrogen when it’s not in use.

A lot of the infrastructure is already in place, and the remainder should be in place by early next year, says Dr Holmes. If it all goes to plan, the project partners want to export what they have learned to other small islands and remote territories, starting with Malta.

‘To start off with, it’s likely that these other projects will be of a similar size to what we have in Orkney,’ says Dr Holmes. ‘But we’re actively working with other European regions and developing a sustainable business model that can be scaled-up and replicated to larger regions as well.’

What are the main sources of hydrogen today?

Until clean hydrogen can be scaled up, producing hydrogen – which in itself is a zero carbon emission fuel or energy carrier – remains heavily dependent on fossil fuels. Today, there are three main sources of hydrogen:

When the methane in natural gas is heated, the molecules split into carbon monoxide and hydrogen. The carbon monoxide can then be treated to produce water gas, from which hydrogen can be extracted.

Oil can either go through the same process as natural gas or, if it’s heavy fuel oil, can be turned into hydrogen via partial oxidation. This involves using high pressures and temperatures to oxidate the oil which, in turn, produces a synthesis gas partially made of hydrogen.

Coal can also be turned into gas, and during the process its molecules are broken down into their hydrogen and carbon monoxide parts.