Honey, let the car drive: tech getting ready to take the wheel 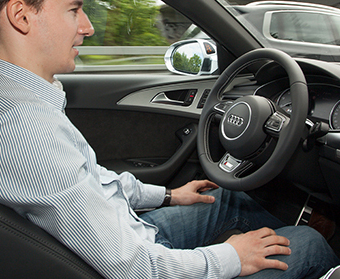 Bumper to bumper again. But imagine instead of staring at the car ahead, you ask your car to take over, turning your attention to a game, a book, or even a nap.

The technology isn’t there yet, but cars are getting better at parking themselves, and adaptive cruise control used by some top-end brands isn’t miles away from automated road platoons that could cut millions from freight firms’ fuel bills.

Led by carmaker Volkswagen, engineers at the EU-funded AdaptIVe project, based out of Wolfsburg, Germany, are working with seven different car models from companies such as VW, Ford, Renault, and Opel to develop cars that can perform complicated driving tasks on their own, with humans around as a fallback.

Cars on the market right now can already automate many manoeuvres, such as cruise control that maintains a safe distance, or even traffic jam assistance that can control the car in a stop-and-go queue, although they still require some supervision.

But the AdaptIVe team is going a step beyond, fully automating tasks like parking your car in a tight spot.

‘You get out of the vehicle, and you press a button and the vehicle drives inside the garage and finds the parking lot.’

‘You come with your vehicle to the parking garage, you get out of the vehicle, and you press a button and the vehicle drives inside the garage and finds the parking lot there and just parks itself,’ project coordinator Dr Aria Etemad explained.

The team uses a combination of radars, lasers, ultrasonic sensors, and cameras to scan the area around the car for obstacles. They also track speed and distance. But more data means cars need ever-more sophisticated software algorithms to decide what is most important. With 60 different cameras looking out at different sides of a vehicle, that can be complex.

‘What we have to do now is data fusion - to get everything from different sources and try to understand the surroundings,’ Dr Etemad said.

Another challenge is keeping humans in the loop, since drivers need to be able to understand what the car is doing and what actions it will take. Dr Etemad describes it as being like a rider and a horse. ‘You have to merge two intelligent systems, for us it is the driver and the car that is getting more intelligent, compared to the rider and the horse. Then you have to make sure that both systems understand each other.’

That means altering what kind of feedback the car puts out, whether it is a graphic or a beep, and then testing the setup in simulators with hundreds of people. Next year, they plan to move on to a closed road course.

The first kind of road automation could take the form of road platoons – connected cars and trucks that drive in convoy along motorways, following a leader which is under the control of a human.

That’s because the fuel savings are impressive. Researchers on the SARTRE project, which is funded by the EU, showed an 8 % fuel economy improvement for the lead vehicle and 16 % for the following vehicles for a platoon going 90 km per hour with five metres between the vehicles.

Led by engineering company Ricardo Ltd in the United Kingdom, with participation from Volvo, the team conducted a public road trial in 2012 in Spain. A professional driver drove a lead car, while cars behind mimicked that movement using radar, cameras, and autonomous controls.

‘The core technologies needed for platooning ... already exist in production; however no vehicle (manufacturer) currently offers a production platooning system,’ project coordinator Richard Saady said. ‘This could start as a system for private platoons (such as a freight company).’

Using autonomous controls to keep such road trains bunched together could even help reduce traffic by increasing road usage and avoiding delays. Alternating leaders in a platoon of trucks could also give drivers an opportunity to rest while on the road.

Having a human in the mix means that the technology could be rolled out sooner than if it was fully automated, Saady believes. ‘Since platooning is restricted (initially) to motorway driving, sensors don’t have to cope with such a complex range of other obstacles - mainly it’s just follow the leader.’

Getting cars out into the real world to test and spur on new technology is the motivation behind the EU-funded i-GAME project, run out of the Netherlands but with participants from around the EU.

The first Grand Cooperative Driving Challenge run by the group was in 2011 and tested platooning. For the coming competition in 2016, cars are expected to have that sorted, and the focus is on getting cars in a road train to switch lanes, re-order themselves, and cross junctions without the help of an active human driver and by communicating amongst themselves.

‘It’s a multi-vendor approach where different (vehicles) come together,’ said Jonas Didoff, a senior project manager for the research institute Viktoria Swedish ICT, which is helping to set up the contest. ‘They cooperate and collaborate all the time. Let’s say 10 to 100 times a second they are sending signals to each other, which means they can drive much closer.’

The cars communicate to one another using wireless radio signals. For the driving challenge, the teams will be tested on how precisely they are able to complete a series of road tasks, and possibly also on how quickly. They are still working out the exact judgement rules.

Didoff thinks that automation could eventually head toward a blending of autonomy and collaboration. ‘That is the optimal solution. That the car will talk to other cars when it’s close to them, and when it’s in the countryside then it can drive by itself.’

While individual countries have their own laws, the 1968 Vienna Convention governs international driving rules and says that a driver must be in control of a vehicle. Automated cars mean that would need rejigging, and fully autonomous cars like a robot taxi could face broader ethical dilemmas over who bears responsibility in an accident or what choices cars make to avoid a crash in an emergency situation.

Still, some projects are already taking a fully automated approach. CityMobil2, led by the Sapienza University of Rome and funded by the EU, has rethought cars in favour of automated public transport. Driverless minibus shuttles just finished a five-month test demonstration in the French city of La Rochelle.

Project coordinator Dr Adriano Alessandrini thinks autonomous vehicles can actually act to enforce existing traffic regulations better, improving safety. ‘You cannot have a manual vehicle driving too close to an automated vehicle. If the automated vehicle detects that a car is following too closely ... it will slow down. So the manual vehicle will have to respect safety distances.’

Aside from safer driving, such automation endeavours, whether CityMobil2 or AdaptIVe, should even help keep ageing drivers on the road. ‘It’s no secret that society is getting older and we want to make sure that also elderly people can drive and get some support,’ Volkswagen’s Dr Etemad said. ‘We want to provide mobility to everybody.’

The 1968 Vienna Convention establishes standardised traffic rules in 73 countries around the world.

It’s thanks to the Vienna Convention that you can drive your car abroad without having to go through lengthy technical tests each time you cross a border.

As well as stipulating that a person must be in charge of a car, the convention also specifies that cars must show a registration number on the front and the back, and carry a distinguishing sign of the country of registration.