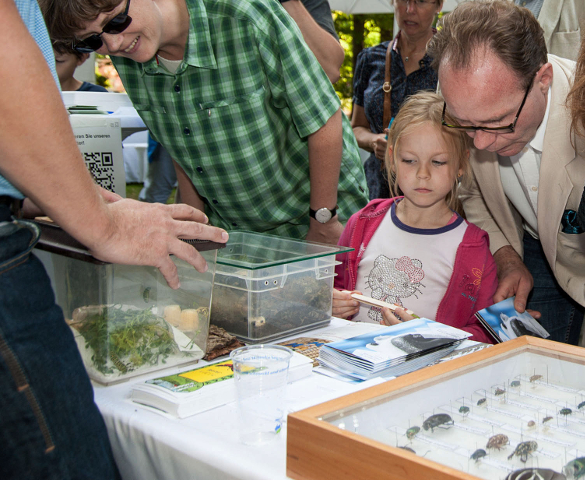 Citizens are learning how to contribute to science by collecting data. Credit: Entomologische Gesellschaft Orion-Berlin

From birdwatchers travelling across the globe to stargazers watching the planets from their bedrooms - everyone can now be a scientist.

The concept of citizen science is simple: anyone can collect data which scientists then use for their research. This means observations made by birdwatchers, fishermen, even insect lovers can count towards new scientific discoveries.

Some of the key areas that are really benefiting from citizen science are climate change, biodiversity and environmental studies.

‘One very, very nice example is a project in Germany where they ask a lot of people to collect mosquitoes,’ said Professor Johannes Vogel of the European Citizen Scientist Association and Humboldt University, Berlin, Germany.

‘We all hate to be bitten by these things. Once you’ve killed one, you can send it in and they tell you which species it is. That is to map the distribution of mosquitoes under climate change scenarios.’

That’s especially important because as mosquito populations move into new areas due to climate change, they can bring diseases like malaria and yellow fever. Knowing in advance where they’re likely to invade allows governments to take steps to protect as many people as possible, such as setting up information campaigns and vaccination clinics.

UK-based Open Air Laboratories (OPAL) has become the largest citizen science project in the world. Since 2007, over 850 000 people have been involved, collecting over 50 000 records by studying things like earthworms and lichens.

In Germany, bug lovers at the Museum für Naturkunde in Berlin, of which Prof. Vogel is the Director-General, have set up a citizen science association called ORION Berlin, which catches insects, identifies them and makes the information available to scientists.

‘Citizen science wants to basically bring out the science in everybody.’

Members from all walks of life meet for monthly presentations, weekend trips and guided tours where they capture insects and then preserve them. Later, the insects are uploaded to various databases where researchers can easily get their hands on the information.

‘I’m a free-time scientist,’ said Jens Esser, chairman of ORION Berlin, which was set up in 1890, meaning this citizen science society is more than a century old.

By day, he’s a history and biology teacher, and at the weekends he collects insects using beating trays, nets and jars, which will be added to databases to further scientific research. It’s the same story for all 70 members, who range in age from 10 to 80.

‘We have some young people in our society and we try to train them on our weekend trips and try to teach them the methods to catch butterflies and insects. In the winter meetings we show them how to prepare and preserve the beetles and butterflies,’ he said.

Citizens shouldn’t worry about quality control either. According to Prof. Vogel: ‘If you collect bucket loads of data, really a lot of data, then artificial intelligence systems can take care of data quality.

‘You can write mathematical algorithims that can help you discriminate between wrong and right data.’

More and more diverse citizen science projects are springing up in Europe, such as studies on porcupines in Italy and on roadkill in Austria.

Under Horizon 2020, the EU has set aside funding for so-called citizens' observatories, which aim to improve environmental monitoring by combining innovative technologies with data gathered by individuals via their smarphones or laptops.

For example, the Citclops and WeSenseIt projects let citizens report on water quality and coastal issues using smartphone apps, and the OMNISCIENTIS project is assessing bad smells found in Europe. It is hoped that these observatories will not only help monitor environmental conditions but also lower the cost of such information-gathering and ensure better decision-making at policy level.

Other EU-funded initiatives include the Socientize project, which aims to coordinate all those involved in citizen science in order to make the whole process run more smoothly.

‘The scope (for citizen science projects) is growing exponentially,’ said Prof. Vogel. And they’re ambitious – ORION’s future plans include mapping all the insects in the botanical gardens in Berlin, which could mean capturing and identifying over 1 000 different kinds of bugs.

Prof. Vogel thinks that the scientific community needs to embrace citizen scientists, to start training people, and showing them how to take part.

‘Everybody is a citizen scientist. Science is not the prerogative of men in white suits,’ he said. Over 53 % of all Europeans are interested in science, according to figures from a 2013 Eurobarometer survey conducted on behalf of the EU, and Prof. Vogel thinks that they should be encouraged to get involved.

The European Citizen Science Association brings together organisations from 17 EU Member States and other countries to encourage the growth of the citizen science movement around the world.

It works with museums, research institutes, citizen science initiatives and universities to train citizens and encourage them to take part in data collection and research projects.