A helping hand for high-tech firms 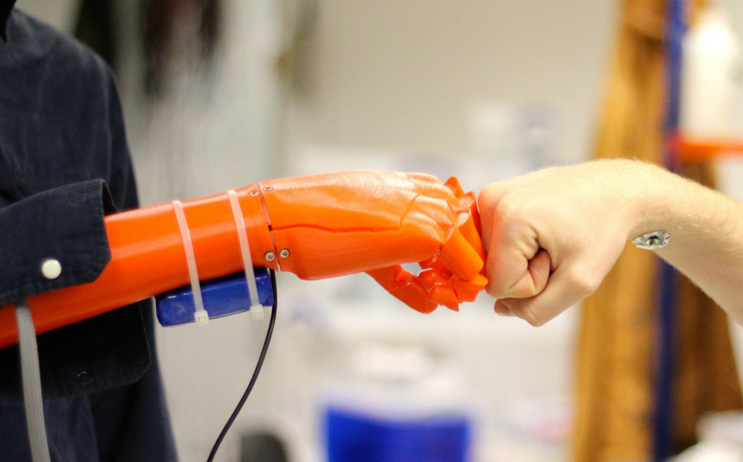 Europe’s roboticists are coming together to find new ways of getting their prosthetic arms, grocery-picking machines and automated vacuum cleaners out of the laboratory and into Europe’s homes and businesses.

Joel Gibbard started out designing prosthetic hands in his bedroom out of sheet metal, but found himself drawn to 3D printing because of its universality and low cost.

Now his company, Open Bionics, believes it can cut the cost of a bionic hand by a factor of 20 from the current around EUR 100 000 price tag.

Despite leading in many areas of research, the EU's capacity to turn ideas into products has fallen behind the US and other advanced economies in many areas.

To help solve this, initiatives such as the Robotics Innovation Facility (RIF) based at the Bristol Robotics Laboratory, UK, are helping to connect researchers to the market.

The idea behind the RIF is to bring researchers and industry into contact with users of robotics technology.

Not only that, but the prosthesis is fully customisable, meaning that reluctant kids can have one themed around characters from the films Iron Man, Frozen and Star Wars.

At the moment, kids don’t really like prosthetics, they’ll take them off, stick them under the bed, and never see them again,’ Gibbard told attendees at the European Robotics Week in Bristol, UK. ‘It makes them feel like a superhero for having (our) prosthetic hand.’

European Robotics Week is a series of events to encourage science, technology engineering and maths education around the theme of robots in society, which is coordinated by euRobotics aisbl, a non-profit organisation which combines around 250 European partners, including industrial groups, universities and users of robotics. It is part of SPARC, the European public-private partnership for robotics in Europe, alongside the European Commission.

Gibbard, whose company has been helped by a business incubator at the Bristol Robotics Laboratory, a collaborative lab run by the University of Bristol and the University of the West of England, was speaking at an event called From Imagination to Market, where companies and start-ups could explain how they have managed to get their innovations to market.

Often companies have benefited from public research funding to help commercialise their innovations, such as that experienced by UK-based online grocery Ocado.

Currently, most of the two million items shipped to customers’ homes every day from Ocado are hand-picked in one of their twelve warehouses, but robotics could make this process more efficient, bringing down the cost of food for consumers.

Ocado engineers have already had success with a simple device – a suction cup mounted on a robotic arm which can pick up thickly packaged items and drop them into a basket. But the suction cup does not fare so well with delicate items such as fruit and vegetables, which can easily be bruised.

That is why Dr Graham Deacon, the team leader of robotics research at Ocado, and his team have been experimenting with more complex robotic claws.

By examining the way humans themselves pick up soft objects – usually, by shaping their fingers around them – he and his colleagues have been trying to teach their robotic claws to do the same as part of an EU-funded research project known as SoMa.

‘We’re trying to get in now, to be part of that solution,’ he said, adding that his company will hopefully have some sort of usable claw to pick delicate items in five to six years.

Dr Mike Aldred, the leader of robotics and cordless electronics at Dyson, the UK technology company, believes such timescales are important in business. Whereas in universities researchers tend to think in very long timescales, he said, companies must innovate to relatively tight deadlines.

‘It makes them feel like a superhero for having our prosthetic hand.’

Dr Aldred gave the example of Dyson’s forthcoming autonomous vacuum cleaner, the Dyson 360 Eye. Once the engineers had established their goal, he said, they put a strict timeframe on getting the product to market.

Another difference between universities and companies, he said, is testing. Whereas academic researchers might be satisfied with a navigation system that works in their clean and tidy laboratory, he said, Dyson has had to test its 360 Eye in
100 000 real households, where it regularly encountered table legs, unruly children and grownups who were not especially tech-savvy.

Even so, Dr Aldred did have some words of encouragement for aspirational roboticists: even if the challenge seems impossible, try it anyway, and you might just succeed. ‘The best person to follow your idea is you,’ he said.

Q&A: In a picture – dancing about particle physics

Particle physicist Professor Kostas Nikolopoulos, at the University of Birmingham, UK, who was part of the team who discovered the Higgs boson, tells Horizon why he worked on a dance about neutrinos and the similarities between the creative process in science and the arts.