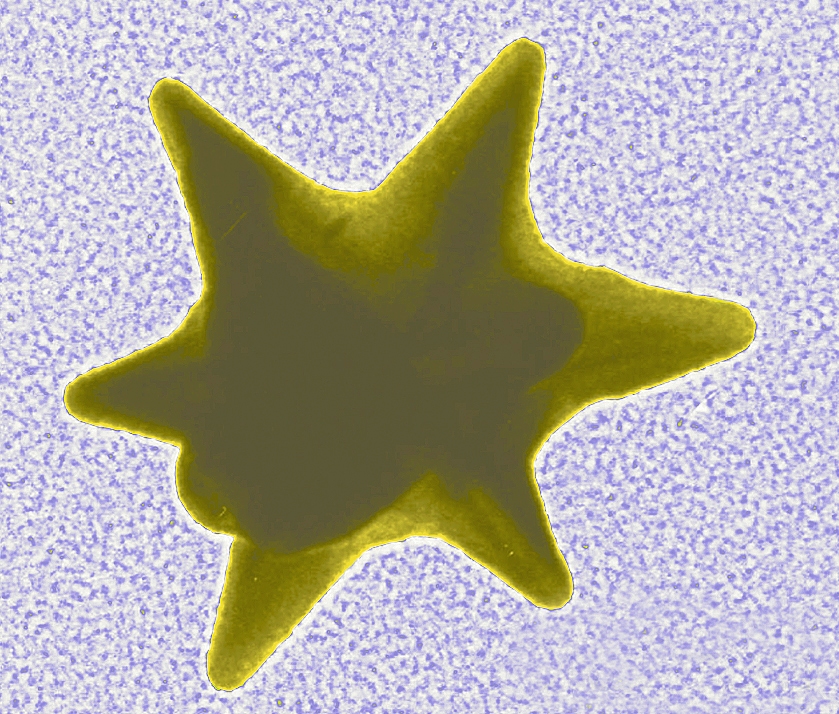 Gold nanoparticles can produce heat when a laser is shined on them. Image: ‘Nanostar 1’ by NIST is in the public domain

Whether it is by heating up tumour cells so they are more susceptible to cancer drugs, or by showing researchers exactly which molecules can stop cancer growing, tiny gold nanoparticles are opening up new avenues in the fight against the disease.

Every year, 1.9 million Europeans die of cancer, according to the World Health Organization, meaning that Europe has around one-quarter of the global total of cancer cases, despite the fact that it has only one-eighth of the total world population.

‘When we use the gold nanoparticle, we get a much stronger signal.’

‘Gold nanoparticles, because they are so small, they have optical properties that are completely different to (normal) gold,’ said Dr Maria Moros, from the Institute of Applied Sciences and Intelligent Systems in Naples, Italy. ‘When they are irradiated with a laser from outside the body, they can produce heat.’

Dr Moros is the leading researcher in an EU-funded project called HyHeat, which is looking into the technique as a means to heat up cancer cells, weakening them and making them more susceptible to cancer drugs.

The clever thing about it is that, for some nanoparticles, the laser is at a frequency which doesn’t affect normal bodily tissue, meaning just the cancer cells get hot.

‘It’s what we call the biological window,’ explained Dr Moros.

The technique is already being used experimentally on patients, but it will still be years until the right combination of laser frequency and gold nanoparticle is found.

Because of this, Dr Moros is working to compile data that correlates the nanoparticles with the correct laser frequency and work out how the cells respond genetically in each case, by conducting tests on tiny freshwater creatures known as polyps.

‘People later on can use this panel of genes ... to classify the nanoparticles before moving forward,’ she said.

When a laser is shined onto a gold nanoparticle, it also reflects light back, and this information is extremely useful in working out how to treat cancer.

That’s because researchers can use it to identify whether a cell is cancerous by analysing a molecule of it on the surface of the gold nanoparticle. They do this by analysing the spectrum of the reflected laser – a technique known as Raman spectroscopy – to work out which molecule it is.

‘When we use the gold nanoparticle, we get a much stronger signal,’ explained Dr Furong Tian, from the Dublin Institute of Technology, Ireland, who was the main researcher in the EU-funded Raman project to work out how to use this technique to test for lung cancer.

It works because molecules in cancer cells give off a different signal to those in non-cancerous cells.

The technology could be used to stop cancer in its tracks, because the gold can double up as a carrier for potential treatments.

Each treatment can be tested on samples of cancer tissue, and scientists can use Raman spectroscopy to check if the treatment was effective.

It means that they could test many different approaches, such as molecules that can interrupt cell division known as siRNA, or antibodies generated by the body, and see which ones work best for each type of tumour cell.

The project ended last year, but the researchers have received funding from the Dublin Institute of Technology to continue the work.

‘We can use this research to see which antibody is more effective for which kind of cancer,’ said Dr Tian. ‘And we can use it to see which siRNA is more useful to stop the cancer from growing.’