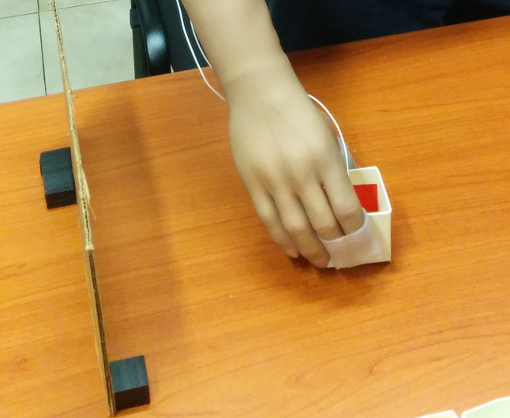 Researchers say they have made the first device that can give artificial hands sensory feedback without needing to be implanted into the skin.

There is already technology that can give sensory feedback to people with false hands, but it requires that a nerve interface is implanted into their arm.

Now, European researchers on the WAY project have developed a method of enabling prosthesis wearers to feel when they have grasped something by using vibrations.

'We have developed a simple yet effective way of providing sensory feedback,' explained Professor Christian Cipriani, coordinator of the WAY project at the Sant'Anna School of Advanced Studies, Pisa.

‘It is because it is simple that it can be learnt by the brain.’

No surgical or medical intervention is required; hand amputees just wear the device over their current prostheses.

Sensors on the fingers then signal when the prosthesis has made or broken contact with an object by causing vibrations in electrodes which are worn on a cuff around the arm.

'They get the same vibration any time they touch or release an object, so the coding is very simple, but it is because it is simple that it can be learnt by the brain,' Prof. Cipriani said.

Amputees that tested the device were using it effectively within a few hours, according to Prof. Cipriani. The researchers expect the device to cost around EUR 100.

The WAY project, which was funded by the EU, has also developed a wearable interface that could be used to tell what the user would like to do with a moveable prosthetic hand. It sits on the arm, like the sensory feedback system, and decodes electrical signals produced by the muscles.

Although many prosthetic hands are controlled by electrical signals from muscles, most are unable to identify specific actions. They only detect when the hand should open and close.

Prof. Cipriani said: 'We aimed to restore the three main grips, which are the pinch grip, the thumb against index finger; the power grasp, the one you use for holding a bottle; the lateral grasp, which is the key grip, the one you use when you hold your keys; and of course the opener.

'So, we developed a system for amputees that is able to decode those grips and the brute force people want to apply.'

The system is intuitive, Prof. Cipriani explained, because the user simply has to think about the grip they would like to use and contract the muscles as they would naturally.

Prosthetics that can give some form of sensory feedback existed back in the 1960s. However, so-called Extended Physiological Proprioception (EPP) devices of the time used cables to connect the artificial limbs to muscles and tendons.

The problem was that although the prostheses functioned very well people felt uncomfortable having cables coming out of their skin.

Bioengineers at the National Technical University of Athens are now re-imagining similar technology, however instead of cables, they are using wireless connections.

'The EPP principle can be seen when we hold a racket and play tennis,' explained Dr Georgios Bertos, lead researcher on the EU-funded BIOMECHATRONICS EPP project.

'The racket is basically an extension of ourselves and without looking at the racket we know where it is and we can hit the ball. This is because we have mechanical receptors in our arms that feel and make the link between our arm and the racket.

'With EPP, the patient will have inherent feedback on the position, velocity and force of the prosthesis,' he said. 'There is one-to-one mapping between the prosthesis and the control residual arm of the user.’

A novel robot hand called SoftHand that was designed to be simple, robust and easy to control, with a versatile grip, is being adapted so it can be used as a prostheses.

There is no sophisticated software, just a control to open and close the hand. All the intelligence is in the mechanical design. The joints and elastic ligaments are designed to provide the hand with a high degree of compliance to external forces. This enables it to form around and grip a variety of objects.

In tests the hand was able to grasp 107 objects of different shapes. These included a slice of cake, a bottle, a USB cable and a tea bag. The EU-funded team has tested a prosthetic version on a few amputees and are now working to produce a viable, affordable product.

‘A concern we have is that prosthetic hands are most needed in places where they are least affordable – for example where war or violence has caused traumas,’ said team leader Professor Antonio Bicchi, from the Italian Institute of Technology in Genova and the University of Pisa. ‘This is a big driver for us to use our technology to make a hand that is not only effective and robust, but also really available to people who need it.’

Video of the WAY project