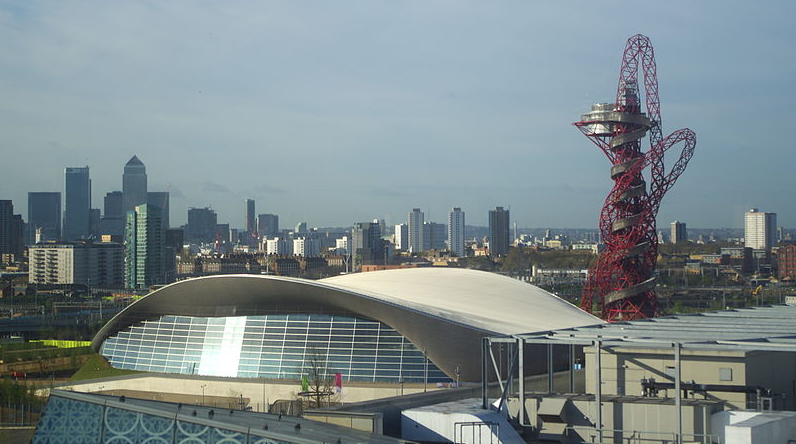 Rent in the East End of London has increased since it hosted the Olympics in 2012. Image credit: ‘LondonOlympicPark-ArcelorMittalOrbitAndAquaticsCentre’ by Bert Seghers is licensed under CC0 1.0

The ever-increasing cost of holding large sporting events like the Olympic Games or the World Cup means host cities are looking for a lasting legacy in their towns as well. But experience shows that this doesn’t always work out as planned.

In the East End of London, UK, for example, gentrification and a rise in the cost of rent means that many residents are being priced out of the former 2012 Olympic neighbourhoods such as Newham, according to Dr Leonardo Mataruna at Coventry University in the UK.

The concept of legacy planning after Olympic Games all started in Barcelona, Spain, with the 1992 Olympics.

‘Barcelona was like the birthplace for legacy planning,’ said Dr Mataruna. ‘It received many changes from the games.’

For instance, planners in Spain used the games to repurpose seaside property from industrial to residential use.

‘In Rio, the changes are more major than in Barcelona, but the question is how long can this legacy survive?’ Dr Mataruna said.

He is currently in Rio supporting the Brazilian judo team, and worked on the EU-funded LONRIO project looking at what lessons this year's games in Rio de Janeiro, Brazil, could learn from the experience of London 2012.

The project surveyed local residents to find out how they perceived changes from the London 2012 games.

Their results were mixed. For example, while most people believed that the games had led to positive regeneration projects in the East End of London, benefitting the area as a whole, fewer people felt a benefit as individuals.

Along with high rents, redesigning towns can also eliminate public spaces that were focal points for communities.

‘The changes really are positive if you have a wide view of the situation, but the social impacts are not always good,’ Dr Mataruna said.

On the other hand, mega projects can summon the political will to kick start needed changes to long-ignored problems.

‘The cynics would say that legacy is just a marketing tool.’

‘For Rio de Janeiro, after the games the city will have the most modern transportation system the country can provide. To me, transportation and mobility are the most important legacy aspects of these games,’ Dr Mataruna said.

One lesson from the London and Rio games is that door-to-door contact between organisers and local people needs to be done more frequently, and over a wider area. London’s multilingual and diverse population in the East End also made such outreach challenging.

‘There isn’t a cookie-cutter model. Each city has its particularities and every population has their expectations. Yet one lesson from this research is that we need to hear not just from those that are immediately impacted, but from residents from further around the Olympic venues,’ Dr Mataruna said.

Legacy is not always about building projects. It can also affect people’s perceptions of sport as well. Dr Ian Brittain, also at Coventry University, is looking at whether management guidelines can help increase legacy outcomes from events in the EU-funded CARNIVAL project.

‘Mega events don’t take place in a vacuum. They are, like everything else, subject to what goes on in the rest of the world. If you compare London 2012 and its timeline, it sort of overlaps right in the middle of an economic downturn and a period of austerity,’ Dr Brittain said.

The project is looking at whether planning can strengthen the possibilities of legacies coming to fruition in specific areas like food waste or perceptions of disability.

Dr Brittain is examining if events like the Paralympic Games actually improve the local population’s perception of people with disabilities. What he found for the London games was that, while such events can change perceptions positively, they are not always long lasting.

He found that a rise in positive perceptions of people with disabilities following the Paralympic Games seems to have been wiped out by subsequent austerity programmes, which have reformed disability benefits in the UK.

‘Things can happen in the world where you may have put the best possible plans in place … but everyone’s priorities suddenly change overnight,’ Dr Brittain said.

One problem his team found was that sport clubs don’t appear to have been consulted about creating greater participation in sport among regular people after the London games, and a possible rise in members. Their research showed that most of these grass roots clubs use local authority sports facilities. Yet austerity budgets from the central government reduced funds by 40 %, putting pressure on local authorities to cut back on sports facilities after the games. Such disconnects can hamper legacy building.

‘The cynics would say that legacy is just a marketing tool to get host city populations to agree to the spending of vast amounts of money by people who are organising the event who move onto other jobs,’ Dr Brittain said. Yet he does believe that some legacy building is possible.

‘I think you can do a lot more than has previously been done to try and ensure legacy, but I don’t think you can ever guarantee legacy,’ Dr Brittain said.