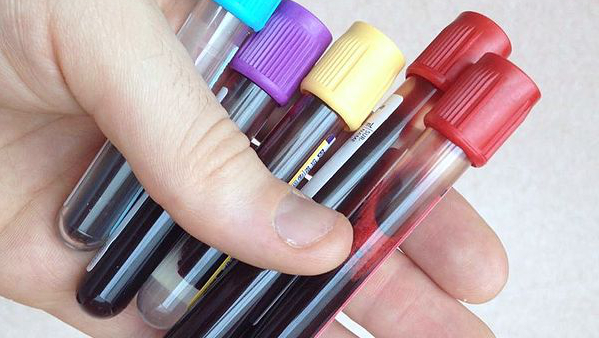 Molecular indicators that show how well blood coagulates could detect frailty. Image credit: ‘Vacutainer blood bottles which are used to collect blood specimens’ by Tannim101 is licensed under CC BY 3.0

Ageing appears to go hand in hand with weaker muscles and bones and declining cognitive ability. But researchers are now working to identify early warning signs of frailty in order to predict and detect who is at risk.

The aim is to delay or even reverse some aspects of ageing and offer improved quality of life to older people. Timely intervention can make a huge difference in preventing frailty becoming a disability and enable major savings in healthcare costs.

By 2025, one in five Europeans will be older than 65 and the number of people suffering from age-related conditions is expected to rise accordingly.

The EU has come up with an action plan which sets out how to prevent and manage frailty and cognitive decline in an ageing population.

This is part of the European Innovation Partnership on Active and Healthy Ageing whose goal is to increase the average healthy lifespan of Europeans by two years by 2020.

Professor Leocadio Rodríguez Mañas, head of the Department of Geriatrics at Getafe University Hospital in Spain, compares it to monitoring and treating high blood pressure to avoid a heart attack.

‘It is far easier and more cost-effective if you can identify hypertension, treat it and prevent heart attacks than to have to deal with heart attacks themselves,’ said Prof. Rodríguez Mañas, who is leading the EU-funded FRAILOMIC initiative, a large-scale research study into frailty.

Medical researchers consider frailty to be a collection of symptoms that amount to a medical syndrome – often afflicting the elderly. But the degree to which systems deteriorate as one gets older can mean the difference between a healthy, active old age and miserable twilight years with limited mobility, dependency on medication and constant care.

FRAILOMIC is attempting to identify molecular indicators – known as biomarkers - that could reveal the processes that turn robustness into frailty and frailty into disability. By combining laboratory and clinical biomarker results, the project aims to develop ways to accurately predict the risk of frailty, the extent to which it may manifest itself, and the prognosis of the frailty syndrome.

‘The aim is to be useful in both primary care and in the hospital setting, and it also has implications for public health in general,’ Prof. Rodríguez Mañas said.

Preliminary indications are that sets of ‘classical’ biomarkers work pretty well in identifying who will become frail and what will go wrong.

‘Frailty is not an irreversible process, so we hope our findings will have an impact on individuals, by suggesting ways of delaying frailty.’

If confirmed, this could mean that several sets of biomarkers could be used in almost any clinical setting, ranging from the most sophisticated research hospitals to the most common primary care centres.

‘According to our data, and our preliminary findings, we are probably going to provide at the end of this study sets of prognostic, diagnostic and risk assessment tools that can be implemented everywhere. I think that this is very good news,’ Prof. Rodríguez Mañas said.

As bone density and muscle mass waste away with age, there is a significant decline in a person’s ability to perform everyday physical tasks. But frailty is much more than that, and relates to many other physiological systems that in their decline can contribute to difficulties in old age.

The EU-funded FRAILSAFE project intends to better understand frailty in relation to other biological, environmental, and behavioural factors, by studying older people in their normal situation rather than a clinical setting.

The idea is to identify qualitative and quantitative measures of frailty by monitoring 450 participants in France, Cyprus and Greece.

Researchers have been developing a ‘sensorised vest’ that can report several different health indicators in real time, in order to crunch data such as blood pressure, heart rate, respiration and posture, as well as information about how mobile the participants are.

‘We monitor people in their natural environment, we monitor multiple signals in real-time conditions, and we rely on data-mining and analysis to come up with new clues to frailty,’ said Professor Vasileios Megalooikonomou, the project leader, who is based at the Computer Engineering & Informatics Department at the University of Patras, in Greece.

‘The study of frailty has so far in many ways been limited to the physical domain, but in addition to this we are also studying the cognitive, psychological, functional and social domains,’ Prof. Megalooikonomou added.

The project will come up with a mathematical model that will be able to predict and detect frailty. The FRAILSAFE model will be able to test new or existing treatments as well as anti-frailty activities in order to identify and select the most effective ways to add to a healthy, active and fulfilling life.

Partners in the consortium are working on games based on augmented reality glasses and dynamometers, which measure force, to encourage physical activity and provide cognitive stimulation.

By providing better understanding of exactly what constitutes frailty, the project aims to suggest ways to delay its onset.

‘Frailty is not an irreversible process, so we hope our findings will have an impact on individuals, by suggesting ways of delaying frailty,’ Prof. Megalooikonomou said. ‘And this work could have an impact on clinicians too, and health systems as a whole, because by making early interventions it could reduce costs, compared to treatments of adverse events later on.’