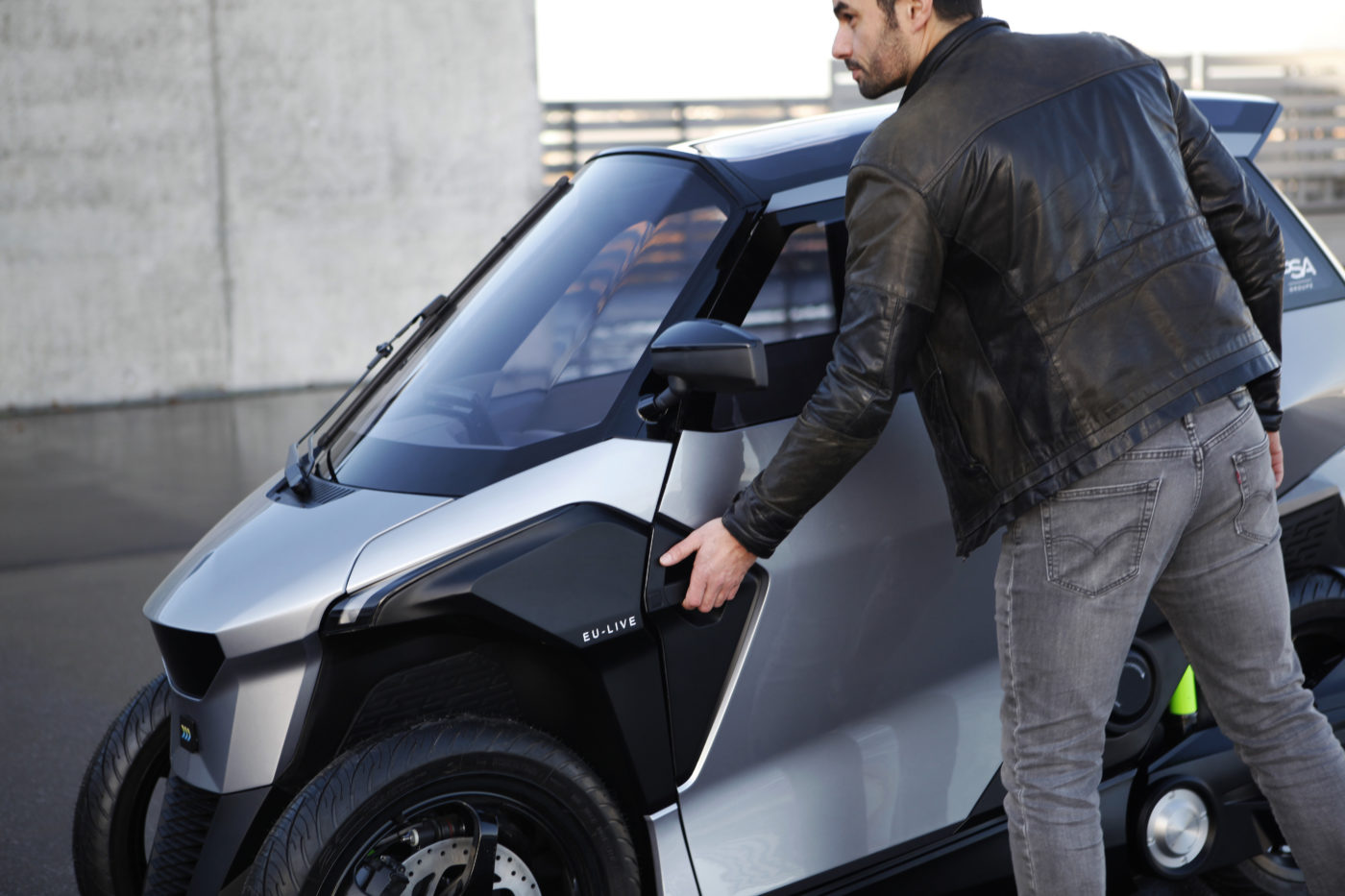 Quiet, narrow and low-emission electric vehicles could be used in conjunction with public transport in cities to ease congestion and pollution. Image credit - PSA Group

Lightweight electric mini-cars could soon be a common sight on the streets of Europe’s cities thanks to longer-lasting batteries, tilting and stackable design, and modular components to bring down the cost of mass production.

These small, light electric vehicles fall into the same transport category as scooters and three-wheelers, and are known as electric L-category vehicles, or ELVs. The idea is that they could help people change the way in which they use transport to improve their quality of life as well as the environment.

‘Narrow-track electric L-category vehicles especially are gaining recognition as vehicles that can cater to the average commuter’s needs while emitting less, taking up less space and being quieter than cars,’ said Serena Fruttaldo, project dissemination manager with a research project called RESOLVE.

The project’s main goal is to develop a manufacturing base of power train solutions ready to be applied to a large number of L-category vehicles. Its consortium includes two leading motorcycle manufacturers, Piaggio and KTM, plus a range of other manufacturers and organisations.

RESOLVE is also developing components that would allow electric vehicles to tilt when they go around corners, with the aim of attracting people away from traditional internal combustion engine vehicles and into ELVs for daily urban commutes.

'The future is really promising for electric urban mobility.'

Sales of hybrid and all-electric vehicles together are still estimated to account for only about 1% of the total EU market, but the segment has been growing in recent years. A recent economic report by ING bank predicts that all new car models sold in Europe will be electric by 2035.

RESOLVE is also addressing the overall riding experience of electric vehicles – for example, by developing strategies to address concerns over the distance the vehicle can travel before the battery goes flat, and by understanding how tilting ELV vehicles could coexist on the streets with motorbikes, cars, heavy goods vehicles, public transport and bicycles.

But it’s more than just a set of wheels that needs to be transformed.

‘The future is really promising for electric urban mobility,’ said Fruttaldo. ‘But the development of this kind of mobility needs the growth of infrastructures, smart services, sharing services and so on.’

In fact, other researchers are hoping to build on the success of bike-sharing schemes by designing stackable ELVs that people could pick up and drop off at different stations and which could then be easily redistributed around a city as required.

To save space, the vehicles could be stacked at the station and towed in trains of up to eight by an operator to redistribute them from full to empty collection points, with the goal of ensuring a continuous level of vehicle availability across all stations.

The idea is for ELVs to be used in conjunction with other transport options in order to replace private vehicles in urban and suburban settings.

Dr Richard Mounce, a transport researcher at the University of Aberdeen, UK, who works on the ESPRIT project, believes that systems such as this could assist in a shift towards the concept of mobility-as-a-service, whereby people could purchase a package of mobility options served by different modes of transport. ESPRIT vehicles could also be optimally positioned to target particular users, such as commuters, at particular times of day.

Fares for use would be set depending on the local context, such as the price for public transport in the region and fuel costs, said Dr Mounce.

‘The important thing is that ESPRIT should not be in competition with public transport, but instead should complement it,’ he added.

The project has already built three prototypes of its vehicle and successfully driven them in a road train. However, it is as yet unclear what the regulations will be on ELVs and permissions would have to be gained at an EU level and in member states, said Dr Mounce. Furthermore, although ESPRIT plans to demonstrate a six-vehicle road train before the end of the project, the full eight-vehicle version will have been demonstrated only within a computer simulation.

‘There needs to be more research done on the modelling side, but also work on how to push it forward towards the market,’ he said. Dr Mounce predicts that a full pilot would be feasible in two or three years’ time, with possible larger-scale uptake over the next five to 10 years.

But increasing the popularity of ELVs means that there will have to be a ready supply of vehicles.

Dr Michael Karner at the Virtual Vehicle Research Center in Austria said: ‘Today, the L-category vehicle market is not really in mass production.’

He manages a project called EU-LIVE, which is developing a modular way of building electric and hybrid vehicles that allows the sharing and interchange of component parts between different vehicles and also reuses modified parts from the traditional automotive industry.

This means costs can be slashed and a variety of ELVs can be produced with limited time and effort. ‘With modular components, you can really bring the time for development and manufacturing down,’ said Dr Karner.

The 12-strong industrial consortium built physical prototypes of a battery-only electric vehicle (BEV) in the form of a scooter, and a three-wheeled plug-in hybrid electric vehicle (PHEV) that is lightweight and narrow compared to cars, handles well in traffic and uses in-wheel motors and rotating doors to save space.

Dr Karner says the new wave of electric vehicles should be easier and quicker to recharge than current models, reducing the need for sophisticated equipment at specialist electric charging points. ‘You could add a plug onto some of the lighting on streets,’ he said.

Dr Karner predicts that if the prototypes were taken forward, they could become commercially available in two to four years’ time.

‘With the ongoing discussion about air pollution in cities causing possible traffic restrictions, and the concept and style of mobility itself currently undergoing transformation, I think there is a strong pull towards innovative solutions for clean and flexible transport,’ said Dr Karner.

The Transport Research Arena conference (TRA) is Europe’s main transport research event and every two years brings together researchers, professionals and policymakers to discuss the latest innovations in transport.

On the table for discussion in 2018 are topics including automated driving, zero-emissions ships and – for the first time – aviation.

The conference is co-organised by the European Commission and relevant European Technology Platforms, which are industry-led bodies that work to promote innovation in sectors such as automotive, rail, shipping and logistics.

It will be held from 16-19 April 2018 in Vienna, Austria, and more than 3 000 participants are expected. More information can be found at http://www.traconference.eu/