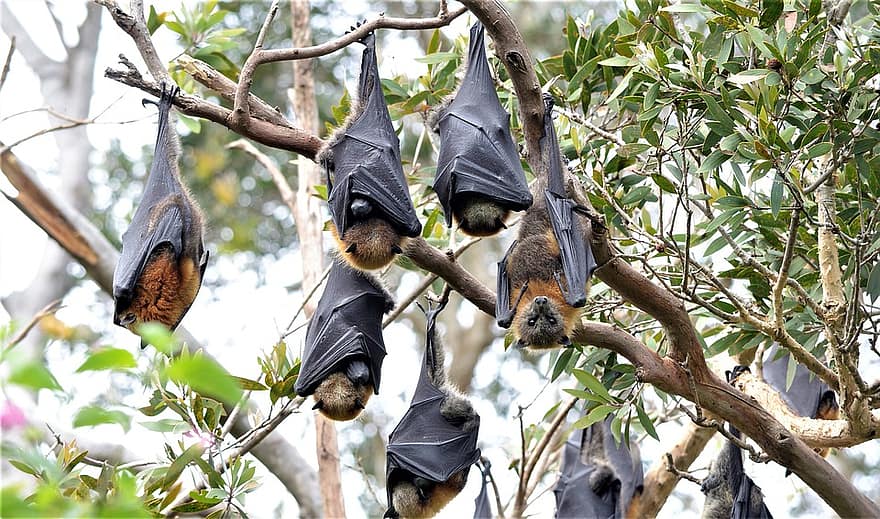 Based on size alone, bats should live around four years but in fact they can reach the age of 40. Image credit - https://www.pikist.com/licenced under CC0

Professor Emma Teeling is co-founder of Bat 1K, an initiative to sequence the genomes of all bat species. She is a zoologist and geneticist at University College Dublin, Ireland, and talked to Horizon about what she has discovered.

Normally, the bigger the mammal, the longer it lives. If they followed this pattern, the longest lived bat would only live for up to four years. But they defy this rule and can live beyond 40, which makes them the longest lived mammal for body size. The Bat 1K consortium unpicked six bat genomes, discovering that genes that we already know are related to ageing in humans, are altered in bats. These genes – and probably others, as yet undiscovered – are behind the many things bats do to combat ageing.

One of their tricks is to assiduously ‘mop up’ and dispose of the detritus that lies around cells as they get older – a process known as autophagy. They also maintain their telomeres – the caps on the ends of chromosomes that gradually unravel as the years go by, leading to ageing effects or cancer.

‘What is quite extraordinary is that we’ve discovered they actually step up their DNA maintenance as they age – the opposite of what happens in other mammals,’ said Prof. Teeling.

Humans suffer from increased inflammation as they age, which causes conditions such as rheumatoid arthritis. But Prof. Teeling and her team have discovered that bats have lost some of the genes involved in inflammation. They seem to balance their immune systems between inflammatory and anti-inflammatory responses to keep it under control.

Some scientists think bats developed these mechanisms in order to be able to fly – they are the only mammal capable of self-propelled flight and that takes a lot of energy. When the organelles responsible for energy generation – the mitochondria – are very active that can cause a lot of damage to DNA. Prof. Teeling’s theory – unproven as yet - is that they may have developed all these fixes to cope with that.

Bats are also stocked with many genes responsible for anti-viral activity and they always have their anti-viral mechanisms switched on. This is probably why, despite getting infected with Marburg virus disease, Severe acute respiratory syndrome (SARS) or Middle East respiratory syndrome (MERS), they don’t actually get sick: as soon as these viruses invade, the bats can deftly modulate their immune systems to neutralise them.

In fact, bats’ immune systems seem to be in a never-ending evolutionary race with viruses, each altering to outwit the other. The traces of some of these historic battles, in the form of clips of genetic material from viruses, can be found scattered within bat DNA.

Some researchers think that the unique immune system of bats forces viruses to rapidly evolve within them, creating a unique breeding ground for viruses that could potentially hop between species. Other researchers point out that many mammals have transmitted viruses to humans, including pigs (swine influenza) and chimpanzees (HIV).

Nevertheless, bats do harbour a huge variety of coronaviruses and are the suspected reservoir for many diseases, including Nipah and Hendra virus infections, Marburg virus disease, and strains of Influenza A virus.

Whether they had a role in conveying SARS-CoV-2 to humans is debated amongst bat experts.

Prof. Teeling was part of a team that recently published research that questions whether bats could be the direct culprits. Famously, the virus gains entry to human cells by latching onto ACE2 receptors on their surfaces. The team, led by Professor Harris Lewin of the University of California in the US, predicted that the ACE2 receptors on bat cells can’t be ‘unlocked’ by the novel coronavirus.

‘It looks like the virus can’t get into bat cells. It’s actually a primate disease,’ said Prof.Teeling. There’s absolutely no published evidence that bats can be naturally infected with Sars-Cov-2, she adds.

But other research has shown that the immediate ancestor of SARS-CoV-2 was likely to have originated in a species of bat. One possibility, therefore, is that bats passed this ancestor onto another species, where it evolved to become SARS-CoV-2, and that intermediate host then passed it to humans.

There is consensus, however, that once land is converted for human use, bats (and other mammals) encounter other species more closely, providing opportunities for viruses to jump between them. Bats, in particular, can be driven close to human habitation because of artificial light, fruit orchards and nesting places.

‘There’s absolutely no published evidence that bats can be naturally infected.’

By understanding how bats manage to avoid falling sick with viral infections, scientists may come up with therapies for humans. In particular, the sensitive way in which they manage to swiftly neutralise viruses, but then turn off their inflammation before it becomes so strong it can cause damage itself, is something scientists want to understand. ‘They are going to teach us how we can modulate our own immune responses to tolerate and live with infections better,’ said Prof. Teeling.

It might also be possible to exploit the secrets of their youthfulness, she says. As well as expressing some ageing genes differently, bats also have genes that humans don’t have. Some of these are expressed more as they age – and others less.

Bats have been killed, burned out of their roosts and attacked with water cannons out of fear they are spreading the SARS-Cov-2 virus – but they are essential to many ecosystems. They are major pollinators in the tropics – including for valuable crops such as bananas, mangos and guavas. They also disperse the seeds of hundreds of plants.

Bats are ‘keystone predators’, which means that their various activities help maintain the balance of the ecosystem. They regulate insects, eating their own bodyweight in them every night. Many of these are crop-destroying insects, such as aphids. In places where certain pesticides have been banned, they are an increasingly important agent of biological control. In some places, bats prey on insects that transmit disease to humans, such as mosquitoes that transmit malaria or Zika virus. ‘They’re very, very important for multiple reasons,’ said Prof. Teeling

Prof. Teeling has previously received a grant from the EU's European Research Council for the AGELESS project. If you liked this article, please consider sharing it on social media.