Fish and plants dying off in Europe’s tainted freshwater 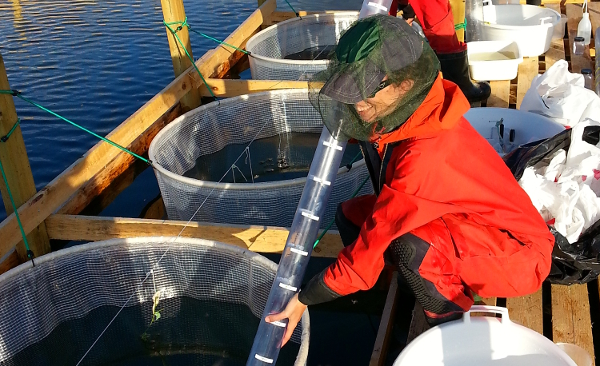 The amount of freshwater extracted from our rivers and lakes is concentrating pollution at such an alarming rate that it is dramatically reducing freshwater biodiversity, according to the world’s longest-running experiment looking at the problem. On top of that, researchers now say climate change is making the whole problem worse.

Each year, agriculture and industry extract more water from our rivers and lakes while simultaneously pumping in more pollutants, like detergents, fertilisers or sewage. Add climate change to the situation and we’re facing even higher concentrations of dirty water.

‘Climate change causes higher temperatures and thus higher evapotranspiration (evaporation and moisture carried through plants), and that increases concentrations of pollution,’ said ICREA Research Professor Sandra Brucet, from the Aquatic Ecology group at the University of Vic in Spain. ‘This is causing a growth in algae production and that kills biodiversity.’

You may have seen lakes or rivers covered by a thick, green layer of slime. This is phytoplankton, a type of microscopic plant, and it thrives on the excess nutrients from wastewater like nitrates and phosphorous from agriculture.

Some phytoplankton species are toxic, which is bad for biodiversity, but the bigger problem is that they take more oxygen from the water to fuel their growth, and that starves large fish and amphibians.

‘There is also a clear reduction in the transparency of water, which means less sunlight reaches aquatic plants,’ said Prof. Brucet, who is the project coordinator of CLIMBING, an EU-funded project exploring the impacts of climate change in freshwater biodiversity and carried out at Aarhus University in Denmark.

The project conducted the world’s longest-running freshwater ecosystem experiment in order to fully understand the factors that climate change and pollution are having on freshwater.

‘We had several mini lakes, some of these enclosures had natural conditions and in others we increased the temperature or added nutrients,’ said Prof. Brucet.

‘It’s clear the effects of climate change and eutrophication (water pollution) are worse combined than they are individually.’

The experiment ran for over 10 years, the longest such test in the world, which allowed the enclosures to resemble real freshwater bodies.

‘We need to start recycling more and invest in technologies that save water in agriculture and industries.’

‘We found that in enclosures with higher temperature and concentration of nutrients the ecological quality and the biodiversity was reduced,’ said Prof. Brucet.

The CLIMBING project also examined a database of over 2 000 European lakes in order to compare warmer and colder waters across the continent. They found that fish in the warmer lakes across Europe were smaller, which indicates lower water quality.

‘This has consequence for the whole food web and the water quality,’ said Prof. Brucet, who warns current water use will continue to threaten freshwater biodiversity.

‘If we keep extracting so much water, we can’t restore these ecosystems,’ said Prof. Brucet. ‘We need to start recycling more and invest in technologies that save water in agriculture and industries, which are two main sectors that consume freshwater.’

Prof. Brucet will now present her results to an international panel looking at the beneficial role that natural elements can play in an ecosystem, an area of study known as ecosystem services. They will form part of a report informing governments on the challenges facing freshwater biodiversity.

‘We have provided evidence on the different impacts that are affecting freshwater and we have recommendations about what we can do to reduce them. The next step now is conservation and restoration.’

One of the natural elements that can help keep ecosystems well-balanced and potentially mitigate the effects of pollution is a microbial community.

Dr Shinjini Mukherjee, primary researcher on the EU-funded MicroCity project, said: ‘(Microbes) participate in biogeochemical cycling such as carbon fixation, nitrogen fixation and de-nitrification. In certain amounts they can even degrade different xenobiotics (man-made contaminants). They also have the capacity to break down several polyaromatic hydrocarbons (chemicals that are released from burning coal, oil, gasoline, etc.), pesticide and herbicides.’

MicroCity, which began in 2015, is examining the different functions of these microbial communities and how they are impacted by different levels of urbanisation.

The researchers are studying microbial genes and functions in over 60 ponds across a range of urban areas in Belgium, like freshwater bodies in cities, gardens, next to motorways and parks.

‘In most urban environments, we also see the use of a lot of pesticides and herbicides in private gardens,’ said Dr Mukherjee. ‘There could also be specific industrial outputs like antibiotics and heavy metals.’

MicroCity examines the DNA of these urban microbe communities to determine what ecological functions they provide and how they change from one pond to the next depending on the levels of urban pollution.

‘We can see if a city pond, for example, has a lower capacity of nitrogen fixation, or de-nitrification, than a rural pond,’ said Dr Mukherjee.

This information can then be provided to regional or local governments for better sustainable development: like what outputs reach freshwater, and how this affects microbial ecosystem services.

‘My vision would be to develop a cohesive synthesis of how these microbes respond to urbanisation,’ said Dr Mukherjee.