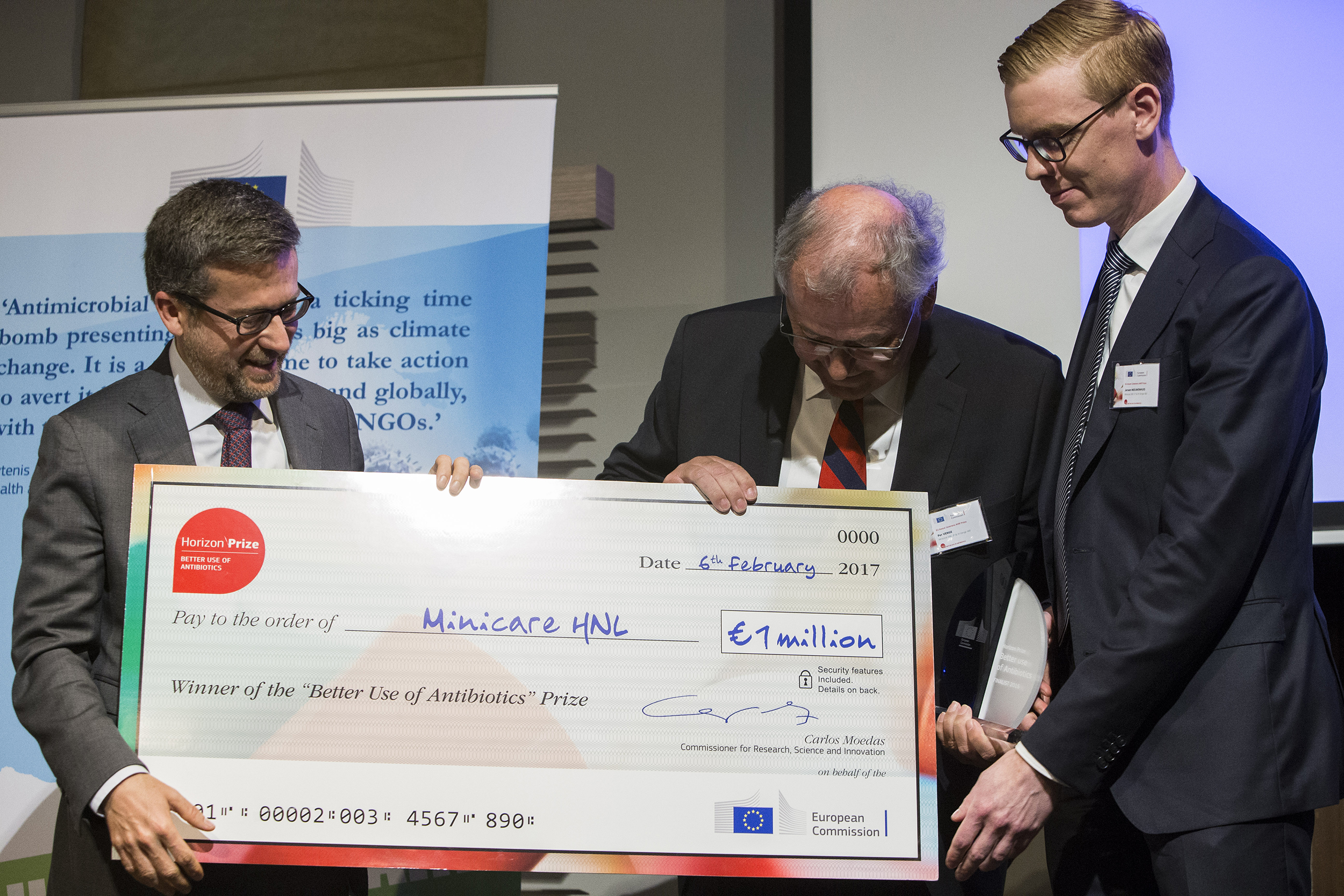 The test can quickly tell if an infection is viral or bacterial. Image credit: European Union / Lukasz Kobus

A finger prick test that can show almost instantly whether an infection is bacterial or viral has won EUR 1 million from the EU as part of the first-ever Horizon Prize.

It’s important as antibiotics are only effective against bacterial infections yet often the symptoms of bacterial and viral infections are very similar.

The unnecessary use of antibiotics is leading to the emergence of drug-resistant bacteria known as superbugs which cause around 25 000 deaths in Europe each year, according to EU data.

At a special ceremony in Leuven, Belgium, the Minicare HNL test was awarded the first-ever Horizon Prize, a funding mechanism that allows small firms and inventors to access research funding by offering solutions to a pre-defined problem.

The EUR 1 million prize will be used to get the finger prick test ready to be commercialised, and the developers hope it will mean doctors prescribe fewer antibiotics.

‘There is a misuse and abuse of antibiotics today and that’s because doctors don’t have the tools to distinguish between viral and bacterial infections,’ said Professor Per Venge, the founder of P & M Venge AB, a Swedish medical research company which is behind the Minicare HNL test along with Philips Diagnostics in the Netherlands.

The winning product is a small handheld device that can check a drop of blood for the presence of human neutrophil lipocalin (HNL).

‘There is a misuse and abuse of antibiotics today and that’s because doctors don’t have the tools to distinguish between viral and bacterial infections.’

The device is being designed for general practices as well as emergency departments. Since antibiotics don’t work on viruses this would allow doctors to safely avoid prescribing them.

Speaking at the awards ceremony, Marie-Paule Kieny, assistant director-general at the World Health Organization, said: ‘Compelling evidence shows that (antimicrobial) resistance is driven by the total volume of antibiotics used.’

The biggest risk is in complex medical treatments such as hip replacements, organ transplants, cancer chemotherapy and the care of premature babies, as the patients are dependent on antibiotics to keep infection at bay.

Jeroen Nieuwenhuis, a senior director at Philips, said it would be years rather than decades before the device would be available in doctors’ offices.

‘We now have a proof of concept which is very encouraging, but before we can get to a test that can be used in a practice there is still a lot of development to be done so we have to validate it on many more patients.’

The other two finalists were ImmunoPoC, a business working on a finger prick test that can differentiate between bacterial and viral infections within 15 minutes. The other, PulmoCheck, is developing a device that reacts to body fluids from a bacterial infection within two to six minutes.

Carlos Moedas, the European Commissioner for Research, Innovation and Science, presented the award and spoke of the growing risk of drug-resistant bacteria: ‘Most bacterial diseases used to be extremely deadly. Now, in just a few days, you can get cured – and we take that for granted.

‘All three finalists that came here tonight are working to revolutionise diagnosis,’ he said. ‘To break the doubt that leads to out-of-control antibiotic use.’

Launched in 2014, Horizon Prizes offer a cash reward to ideas that can meet a defined challenge facing society today.

From cleaner engines to low-carbon hospitals and solar panels for historic buildings, Horizon Prizes aim to stimulate innovation in 12 specific areas, with rewards ranging between EUR 500 000 and EUR 3.5 million.

The idea behind these prizes is to encourage inventors and small- and medium-sized enterprises to apply for research funding, as international research consortiums win most traditional EU research grants.

Horizon Prize – Better Use of Antibiotics