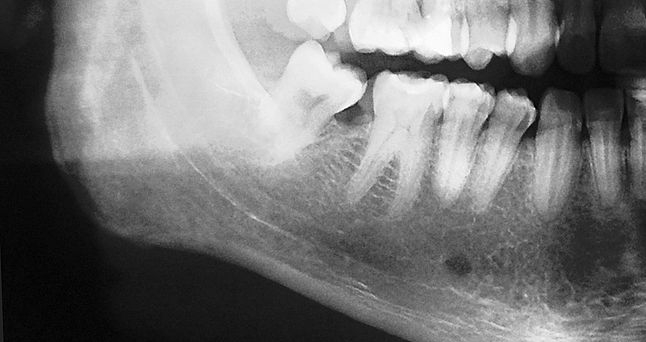 The modern human jaw has been millions of years in the making. Image credit: 'Jaw xray' is licensed under CC BY 2.0 by Tommy from Arad

Researchers are studying the evolutionary changes in human jaws to better understand the forces at play, and their work could help improve dental treatment and even regrow lost teeth.

The structure of our jaws has been millions of years in the making, from the earliest vertebrates to people settling down on farms, and it continues to evolve today.

In the past, anatomical changes, such as in the lower jaw, have gone hand-in-hand with changes in human diet. While it may be difficult to determine strict causality, researchers say there is clear evidence of adaptations in the jaw dating back to the transition between foraging and a more settled agriculturalist lifestyle, which took place in the Near East about 10 000 years ago.

‘The supposition is that as humans became more settled, the demands on their jaws changed,’ said Dr Ekaterina Stansfield, principal investigator in the BioMan research project being carried out under an EU Marie Skłodowska-Curie research fellowship at the University of York, UK.

The thinking is that hunter-gatherers would tend to have robust lower jaws, because tough food takes a lot of chewing. But following the transition to agriculture, cooking in pots became widespread, resulting in considerably softer food and less chewing demand on the jaw.

‘Jaw size and development may be driven more by usage, rather than predetermined by genetics,’ Dr Stansfield said.

She is using biomechanical modelling of forces and stresses on the jaw to try to bridge the gaps between research on older human hunter-gatherers, agriculturalists, and the modern jawbone.

‘We are looking at micro-evolution – the evolution within one species over a prolonged period of time,’ Dr Stansfield said. ‘We hope to be able to show how the transition to agriculture has changed us and how this is continuing at the present time.’

Professor Paul O'Higgins, BioMan research supervisor and head of the Centre for Anatomical and Human Sciences at the Department of Archaeology and the Hull-York Medical School, said such research also had long-term medical potential.

He pointed out that softer food in recent centuries has been accompanied by loss of the third molar or ‘wisdom teeth’. Many people do not get them now.

‘From the time of change from foraging to agricultural subsistence, we start to see a high prevalence of dental crowding.’

‘Hunter-gatherers all have them. And the early farmers have all got them. We have only lost them in the last few hundred years, as diets became extremely processed and extremely soft,’ Prof. O’Higgins said.

‘I think these methods and this work could eventually contribute to prevention and treatment of orthodontic problems,’ he added.

In settling down to farm, humans also began to show geographical differences in their jaw structures, possibly because of diverging diets, said Professor Ron Pinhasi, of the School of Archaeology at University College Dublin, Ireland.

As principal investigator of the ADNABIOARC project, funded by the EU’s European Research Council, Prof. Pinhasi looked at the different rates of change in human tooth development and placement – known as dentition - compared to the jaw.

He found that while dentition is more genetically determined, the size and shape of the jaw is not only controlled by genes, but also strongly affected by the environment, such as how much it has to chew.

‘One of the surprising findings was the incongruence between the development of teeth and of the jaw,’ he said. ‘It may be too speculative to say it was simply the softer food and more sedentary lifestyle, though that may indeed be the cause. But it is clear, there are very distinct differences between hunter-gatherers and the farmers.’

A result of these different rates of change is malocclusion – crowded or mis-positioned teeth. This is common now, but only began showing in humans with the transition to agriculture.

‘This corresponds to the evolution of our culture,’ Prof. Pinhasi said. ‘We didn’t expect it to start so early, but from the time of change from foraging to agricultural subsistence, we start to see a high prevalence of dental crowding, accompanied by changes in the mandibular (jawbone) shape.’

Palaeobiologist and developmental biologist Dr Monique Welten is also unpicking processes in the evolution of jaws and teeth, but from a much earlier evolutionary stage – in fossilised and living fish.

‘It was always assumed that teeth evolved after the jaw, but findings in the fossil record suggest that some jawless creatures have teeth, such as fish with teeth on their gill arches, and some have jaws without teeth,’ said Dr Welten, whose ToothJaw project is funded by a Marie Skłodowska-Curie fellowship at the University of Bristol, UK.

Her research has used X-rays from the Swiss Light Source synchrotron in northern Switzerland to look in minute detail at the tooth and jaw structures in fossils and in fish that are still living today – the zebrafish and the Senegal bichir. These intricate details have helped her to develop a 3D virtual model of the processes at work during development and in comparison with tissues present in fossil fish.

The zebrafish, Danio rerio, an important laboratory model organism for biomedical studies, regularly replaces its teeth and is particularly useful for studying the role of stem cells in this. Unlocking the details has the potential for medical use, such as regenerating teeth in people who have lost theirs in an accident or through disease.

And the Senegal bichir, Polypterus senegalus, has evolved very little in millions of years, so it acts as something of a living model for the fish frozen in time.

‘This fish, which is also available as an aquarium pet, may be the closest living animal that could represent the fossil fish I have been looking at,’ Dr Welten said.

She is currently writing up her high-resolution studies for publication.

‘We have found several things that surprised us and seem to be patterns that have been different to the patterning theories that have been assumed since the Victorian age,’ she said.