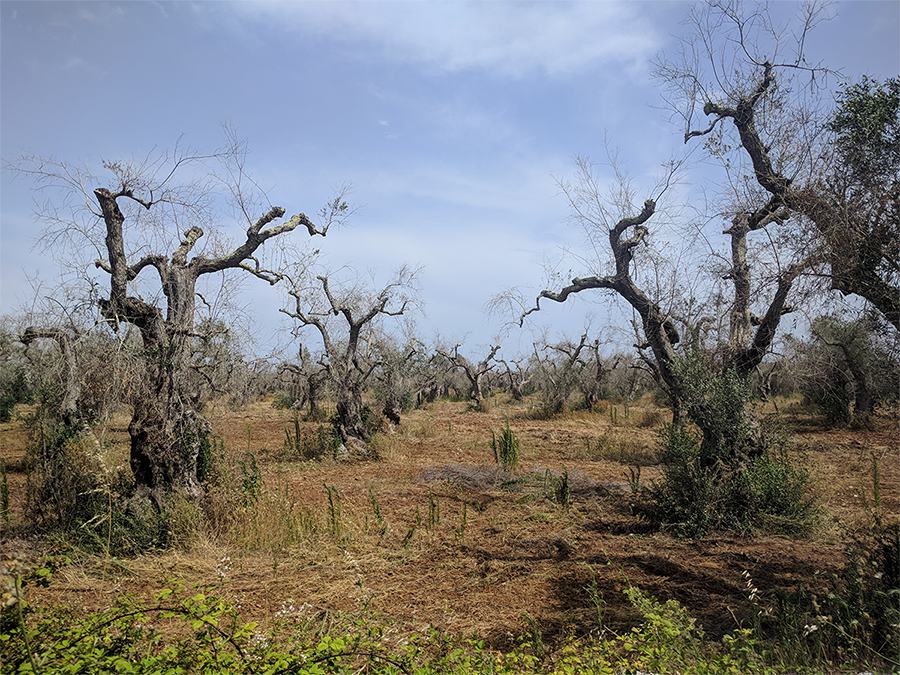 In the late summer harvest of 2013, olive farmers in the Puglia region of southern Italy noticed that the leaves on several of their trees were turning brown and their shoots withering. The problem spread from one orchard to another, as more olive farmers found their trees were drying out and beginning to die.

Genetic testing confirmed them to be infected with Xyella fastidiosa, a bacteria originally found in America. Soon outbreaks appeared throughout the Mediterranean, even briefly as far north as Germany in 2016.

The bacteria is mainly spread by sap-sucking insects known as spittlebugs and sharpshooters. As the insects feed, the bacteria is able to infect the vessels that transport water and nutrients around the plant, known as the xylem. As the bacteria destroy the xylem, it slowly chokes the plant.

‘We are dealing with a very severe situation in southern Italy,’ said Dr Maria Saponari, based at the Institute for Sustainable Plant Protection in Bari, Italy. Europe’s researchers were caught off-guard by the epidemic, she explained. ‘When the bacterium was discovered here, there wasn’t any research centre in Europe working specifically on this pathogen. We were starting from zero.’

The disease can infect a wide range of plants, including shrubs like the myrtle-leaf milkwort and rosemary, oak trees, and important crops like lavender. Food crops including cherry trees, plum trees and olive trees are among the species considered to be at high risk.

In particular, the outbreak has amplified problems in Italy’s strained olive oil sector. In 2018, the country reported a 57% drop in its olive harvest compared to 2017 – a 25-year low. Researchers blamed a frosty spring followed by a summer drought, which weakened the olive trees and left them even more susceptible to infection.

The intense summer weather in southern Italy may also have made it easier for the disease to spread among olive trees as insects carrying the bacteria sought out food in the dry conditions. ‘Here in summer, olives are the only green plants that we see,’ said Dr Saponari. ‘Olive canopies, for them, (are) like a refuge to survive.’

While the disease has been found in a number of EU countries, it appears ‘the strains that have been imported in Corsica or in Spain are much less aggressive than the strain spreading in Puglia’, added Dr Saponari.

In response, Dr Saponari is leading one of several Europe-wide projects seeking ways to curb this new threat to Europe’s olive crops, and monitor its spread. Her XF-actors project is examining olive trees’ genetics to see if some of the plants have natural resistance to Xyella fastidiosa that can then be used to breed crops that are more resilient against the disease.

‘We are dealing with a very severe situation in southern Italy.’

Researchers on the project are also conducting field experiments to look at natural strategies to combat the disease, such as using kaolin clay as an insect repellent. Others are experimenting with ‘border plants’ that can be grown around olive groves and other important crops to draw the bacteria-carrying insects away from the crops, and ‘sentinel plants’ such as the myrtle-leaf milkwort which show symptoms of bacterial infection sooner, allowing action to be taken quickly to contain an infection.

It is also hoped it may be possible to contain the disease by chopping down infected plants, using more insecticide, or planting crops that are less susceptible to the bacterial strain.

The project team’s priority lies in assisting the early detection and containment of the disease. Field inspections and new imaging technology developed by the XF-actors project can already predict how the bacteria may spread, and how to contain it. For example, a combination of thermal images, fieldwork, and spectroscopy can now detect infection in plants and trees before any symptoms appear.

All this information can then be put together to give the authorities a better idea of in which areas the disease is more likely to spread, and so where to send their inspectors next.

To date, monitoring and predicting outbreaks has proven difficult. Even tracking the disease-carrying insect vectors involves hours of sweeping trees and shrubs with entomological nets, and scientists still have to unravel exactly how the bacteria passes from the insects to the plants.

‘(Nets are) the best way to catch them,’ said Professor Alberto Fereres, an entomologist based at Spain’s Institute of Agricultural Sciences in Madrid. ‘They are not very much attracted to sticky-colour traps. They communicate by sound – they don’t use colours as visual cues to find their host plants.’ 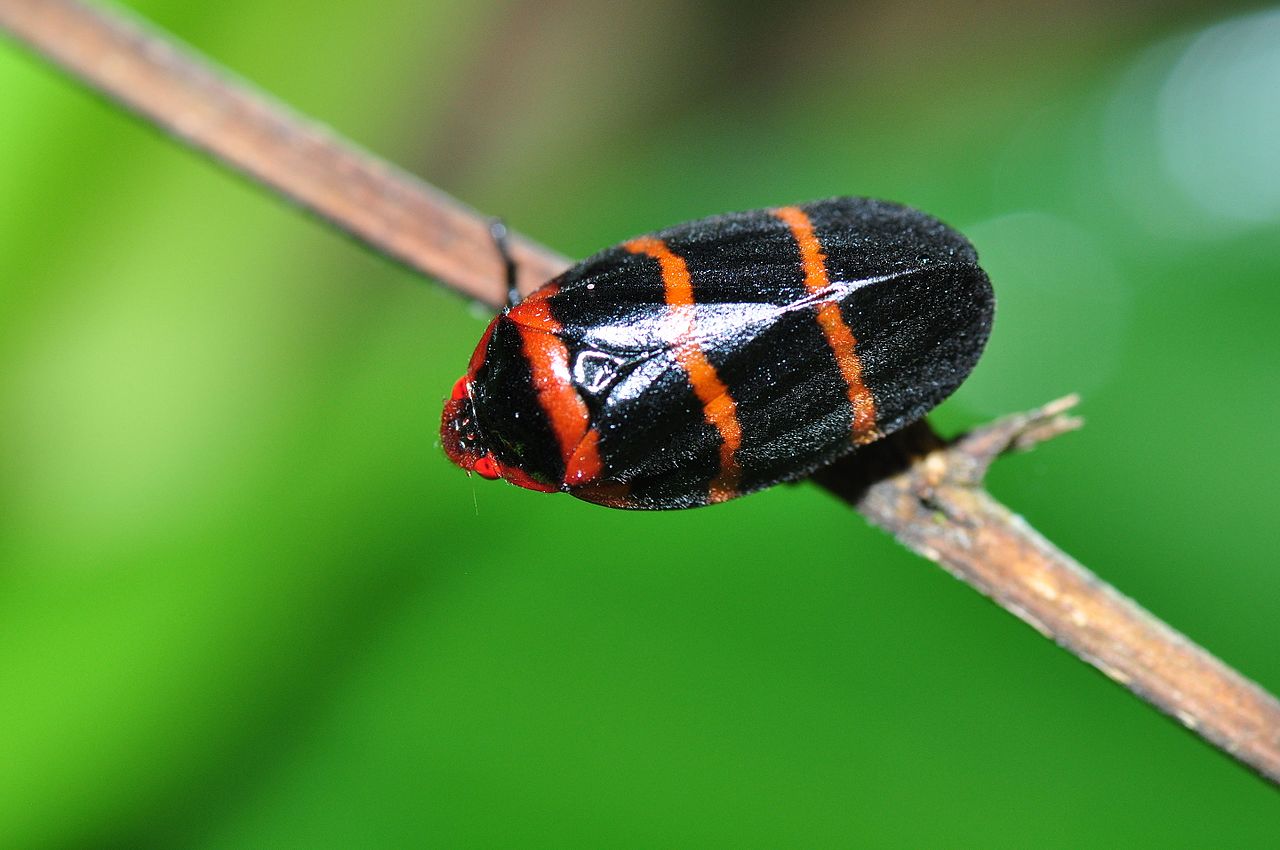 Prof. Fereres works on the XF-actors project while also leading another project aimed at tackling pest-spread pathogens in Europe, called POnTE. Prof. Fereres and his team are hoping to understand how insects transmit bacterial diseases like Xyella fastidiosa.

Their research is providing some early clues for strategies to stem the transmission of the disease. One involves introducing other non-harmful bacteria into the insects that make it harder for Xyella fastidiosa to spread.

‘These can do two things – they can try to suppress the replication of the (Xyella) bacteria, (and) they can also compete with the bacteria in the vector for binding sites,’ explained Prof. Fereres.

‘(This) binding site is the precise place where the virus or bacteria binds inside the insects mouthparts,’ said Prof. Fereres.

His team is also experimenting with antimicrobial peptides – short bits of protein – and chemicals that can interfere with the bacteria’s ability to remain inside insects’ bodies.

The project is trying to prove which insects can pick up the bacteria from a plant and which are able to successfully transfer it to other plants as they feed.

The team are conducting laboratory experiments that place infected insects on plants in controlled environments so they can pinpoint what exactly needs to happen for insects to transmit the bacteria to other plants – do they need to bite into the xylem specifically or just into other parts of the plant, for example.

The bacteria could also affect each plant species differently.

‘We don’t know the genetic determinants which lead to the infection of some plant species and not other ones… that are genetically close,’ says Dr Anne Sicard of the Institut National de la Recherche Agronomique (INRAE) in Montpellier, France.

Dr Sicard leads the XYL-EID project, a joint effort between INRAE, the University of California Berkeley, US, and Italy’s National Research Council, which is analysing the bacteria’s DNA to find out why such differences occur.

The project is searching for genes involved in helping the bacteria adapt to new environments, and in particular what happened in the outbreak in Puglia. They have analysed 74 bacteria samples collected from infected olive trees from across the affected area by sequencing each of their genomes.

This work is already offering some promising insights into the origin of the outbreak. All samples are genetically very similar to one another, confirming that the outbreak in Puglia is the result of the introduction and subsequent establishment of a single strain of Xyella fastidiosa. They also had a genetic similarity to a strain of the bacteria found in coffee plants in Costa Rica.

But while this research may ultimately provide new ways of fighting the disease, it is unlikely to eradicate it, added Prof. Fereres.

‘We will have to learn how to live with Xyella, but we will have to also develop ways to contain the disease as much as possible and to avoid situations as in the south of Italy.’ 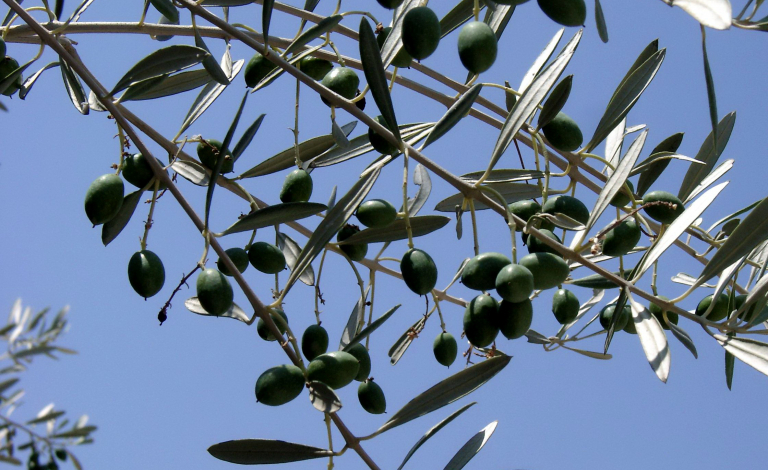