Eyes in the sky to help farmers with weed control 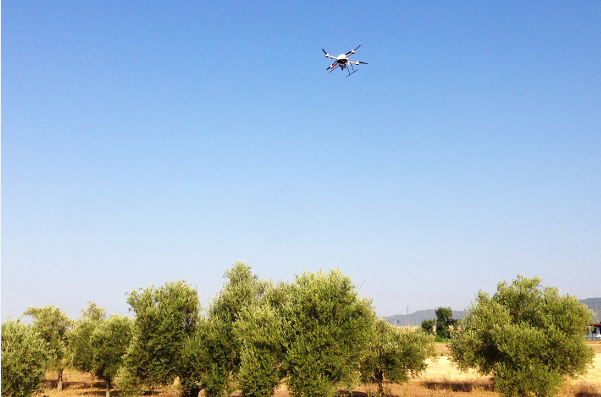 The last place you might expect to find drones and rovers is checking up on a corn field, but they could soon join tractors and ploughs on a farmer’s list of must-have agricultural tools, thanks to their potential to reduce pesticide use and increase the amount of crops that can be grown.

It’s part of a move towards so-called precision farming, where farmers use equipment to monitor their crops and respond to issues when and where they occur, rather than applying blanket solutions to an entire field.

The dangers of excessive pesticide use on the environment can be traced back to the 1962 book ‘Silent Spring’ by Rachel Carson, which has been credited as starting the modern conservation movement.

The EU now applies restrictions to certain pesticides containing neonicotinoids, which have been linked with the collapse of honey bee populations throughout Europe.

In 2014, an EU study highlighted the benefits of precision farming. Using this method can reduce pesticide and fertiliser runoff, which can greatly damage the local environment.

Dr José M. Peña of the Institute for Sustainable Agriculture in Cordoba, Spain, ran the EU-funded TOAS project, in which drones were flown over crops to create weed infestation maps for farmers so they could pinpoint which areas to treat.

‘In Europe, 60 % of the pesticides we apply are herbicides to control the weeds,’ said Dr Peña. ‘(With) the technology applied in the crop we can radically reduce the use of these chemicals, and that is a benefit for the environment and the farmer.’

Dr Peña and his team used drones and image analysis technology, which detects slight differences in field colour, to discover vegetation and competitive weeds. However, weeds and budding crops can appear similar in the early season, when crops are at their most vulnerable.

The solution involved examining crop patterns alongside images. ‘We know the crop follows a pattern, and the vegetation that is out of this pattern is classified as weeds,’ said Dr Peña.

‘So in this way we can integrate the spectral information (and) also the position and the shape of the plants in the software to detect those ones that are weeds.’

Farmers can then apply weedkiller to specific areas, monitor the evolution of their crops over time, and create a photorealistic 3D map of their field by taking aerial pictures from multiple views.

After firstly analysing maize fields and olive groves, the team later found the technology worked for other crops such as sunflowers, almonds and grapes.

‘This demonstrates that the technology and the project can go further than the original idea,’ said Dr Peña. ‘As well, we attained a very high accuracy – we can detect more than 95 % of the weeds in the fields. One important thing is that we can detect the parts of the crop field where it’s free of infestation. This place is the part where the farmer does not have to apply the herbicide.’

Spotting the weeds is just one half of the task, though, and researchers elsewhere are developing unmanned ground vehicles, or rovers, that can complete the job by getting rid of the weeds.

‘We can radically reduce the use of these chemicals, and that is a benefit for the environment and the farmer.’

‘What we are doing is really demonstrating that it can be done fully automatically,’ said Prof. Roland Siegwart of ETH Zurich, Switzerland, who leads an EU-funded robotics project called FLOURISH to develop a prototype of an integrated drone and rover system.

By scanning different crop characteristics, such as height and canopy cover, the drone can communicate the areas that need attention to the unmanned rover on the ground. The rover then removes the weeds, applies pesticide to a specific area, or highlights areas that may need extra fertiliser to the farmer.

Prof. Siegwart says that this could lead to much more efficient use of pesticides.

‘I would estimate it’s probably a very small fraction of a percent of all chemicals which are sprayed on the field which really has an impact,’ he said. ‘If we have more information you can actually, hopefully, get to a much higher efficiency. With probably 100 times less chemistry put on the field you have exactly the same effect.’

Increased research in agricultural technology may also have the added benefit of removing some stigma about drone technology itself as it helps to solve problems such as how to produce enough food for a growing population.

‘Typically we say that around 20-30 % of the whole collection of food on the field is already lost because there are some issues on the field. If you can reduce this it can really help to feed the world’s society.’