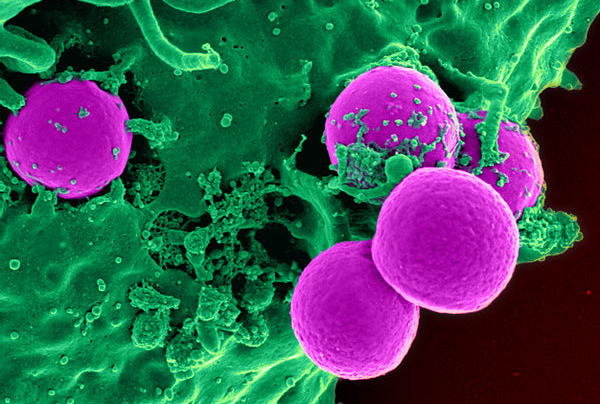 Researchers have seen improvements in tackling common but difficult to treat bugs such as MRSA. Image credit - ‘Human neutrophil ingesting MRSA’ by National Institutes of Health is in the public domain

As the European Commission publishes a new plan to fight the threat from drug-resistant superbugs, Professor Herman Goossens, the initiator of the first European Antibiotic Awareness Day, says he is optimistic that scientists and industry can work together to solve perhaps the biggest challenge of our time.

What is the worst-case scenario if the problem of drug-resistant bacteria, known as antimicrobial resistance (AMR), is not solved?

‘Think of a man with acute prostatitis – a benign infection that we currently treat with oral antibiotics. Normally they are treated at home but if the bugs that cause the infection are resistant to antibiotics, we need to keep these patients in hospital for weeks where they have intravenous antibiotics. If the bugs then become resistant to the heavy-duty drugs that we use in hospitals, we would go back to the era where people were at risk of dying from minor infections.

‘Similarly, cancer patients are frequently admitted to hospital due to infections but can usually be treated successfully. If the antibiotics no longer work, they may die not of their cancer but of an infection.’

It's almost a decade since you initiated the first annual European Antibiotic Awareness Day in 2008. What prompted you to take this initiative?

‘A Eurobarometer study in 2005 asked Europeans whether antibiotics can kill viruses as well as bacteria. The answer, of course, is no. But large numbers of people got it wrong. There were a couple of interesting things about this.

‘For a start, the results were worst in southern and eastern EU countries. In other countries, including Belgium and France, levels of knowledge were much better. It turned out that Belgium and France had run annual awareness campaigns since 2000 and 2002, respectively. And we also saw from some collaborative EU projects – such as GRACE – that awareness campaigns successfully feed into attitudes.

‘The other interesting thing was that countries that did poorly in the Eurobarometer survey had higher antibiotic consumption. In Europe, we have great data on antibiotic use which enables us to understand the problem, devise interventions and measure the impact.’

From your work at the University Hospital of Antwerp, in Belgium, have you seen any improvements?

‘In some areas, yes, but it’s not a universal success story. Antibiotic use in humans and animals has changed. This is thanks in part to European initiatives to tackle a common hospital bug, MRSA (Methicillin-resistant Staphylococcus aureus). Patients have benefited from EU-wide research and policy initiatives that ultimately made hospitals safer.

‘However, with bacteria such as those that live in the gut, the situation has gotten worse and worse.’

AMR has risen up the political agenda at European and global level. What material impact, if any, has this had?

‘Last year was the most significant ever in terms of attention from senior global leadership and this will be carried forward into the G20 meeting in Hamburg on 7 to 8 July where the German government has put it on the agenda. Last September, the UN General Assembly recognised the One Health approach to addressing AMR (where medical doctors, veterinarians and policymakers collaborate). Countries have until September 2017 to produce their national action plans on AMR and I know that some – China and India, for example – are already significantly increasing their activities.

‘The impact is huge and the EU has taken the lead for many years not only by publishing reports and making strong statements, but also by significantly funding research and public health initiatives. For example, in the countries participating in the Joint Programming Initiative on Antimicrobial Resistance (where EU Member States coordinate their research to avoid duplication), we found that 33 % of the total investment in research on solving AMR came from the EU. The data also suggests significant underfunding of research on antibiotic resistance by the (EU) Member States.’

‘Tackling antibiotic resistance, as well as so many of our current problems, the solution can only ever be at a European, or even a global level.’

Do you think the European Commission's new AMR action plan frames the problem in the right way? What is your response to the concrete proposals it contains?

‘Yes, it has a number of new proposals and strengths, including a lot more attention on One Health, which is exactly what we need. The plan makes several recommendations on how the public and private sector could collaborate more closely, such as by building networks for clinical trials on new antibiotics and diagnostics. It also commits to a stronger EU presence at global level, which I welcome. Indeed, it is crystal clear that for tackling antibiotic resistance, as well as so many of our current problems, the solution can only ever be at a European, or even a global level, despite the current populist view that we are better off attempting to address problems at national level.’

Is there anything missing that you think deserved more attention?

‘I was disappointed with the last chapter on measuring success. Millions of Europeans are wondering what the EU is doing for them, and believe that the EU spends its money on fanciful projects that don’t benefit ordinary citizens. Therefore, strategies to measure the impact of the action plan and communicate this more effectively with European citizens should have been addressed. The gains made in reducing their risks from antibiotic resistance through the action plan could be a nice example of how great the EU project is and what it means to each individual personally.’

Finally, how optimistic are you that we will win the battle against AMR?

‘I’m optimistic about what’s happening in Europe and about the AMR action plan, but (we) need to work out how to get academia, government and industry together. If we can figure that out, I think we can control AMR.’