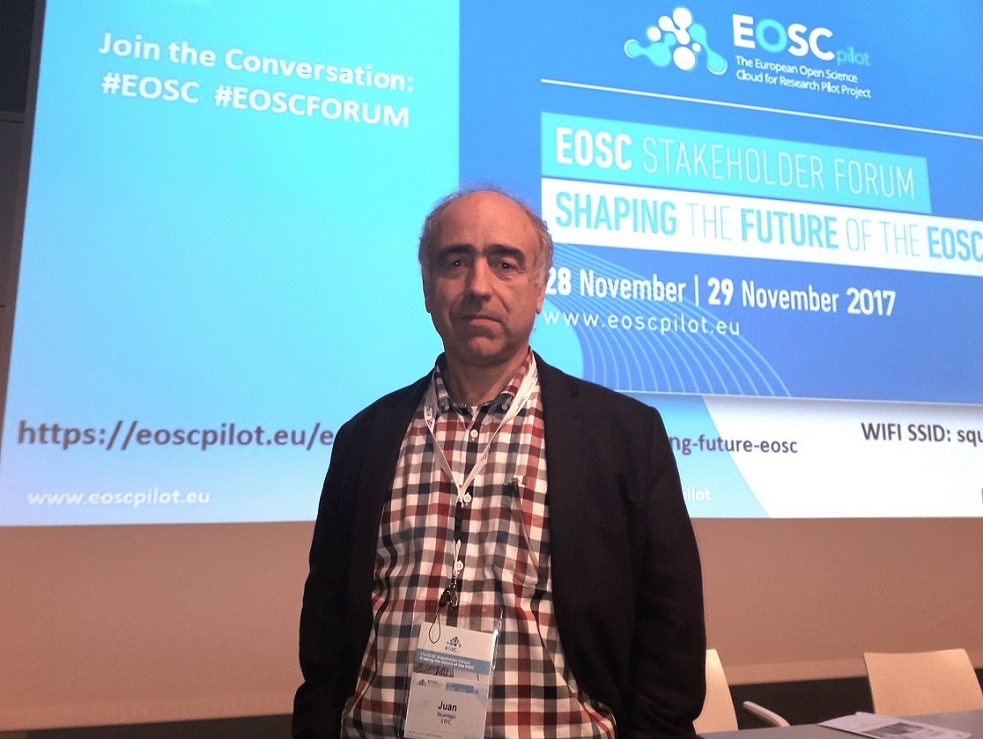 Dr Juan Bicarregui says it’s a long road to a full European open science cloud but some parts will be available for use very soon. Credit — Kevin Casey

Changing the way science is done in Europe is the first job in setting up the European open science cloud, a huge shared data repository that will enable data from all publicly-funded research to be freely accessible, according to Dr Juan Bicarregui from the Science and Technology Facilities Council, UK.

‘One of the things Commissioner Moedas (the EU's research, science and innovation commissioner) has said, which I agree with completely, is that this is going to allow a new generation of scholars to share and communicate data and discoveries in a way that has never been done before. The idea is, that everyone can share their information, the computer services, the algorithms, the analysis of the data, in order to make better discoveries. If you read a paper and you see a graph, you will be able to click on the graph and you’ll get the data of what’s behind that graph. You can also read up on the analysis that produced the data. That will push science along a lot more quickly.’

You're one year through the two-year pilot project. Can you explain what you’ve achieved so far?

‘There were a number of barriers to the science cloud identified last year. A lot of those were about the way that science is done. We needed to remove those barriers by gathering people together across disciplines, across countries and across roles. That’s the first job – bringing everyone together to agree what we need to do.

‘In theory sharing is good, but in practice it can be difficult to get it right.’

‘We need to reach a consensus about what we should be focusing on and what the programme should be. That’s the biggest thing that this pilot phase is doing, it's building this sense of direction and the prioritisation of the different and possible activities.’

‘The underlying principle is that we’re not going to build something new from scratch. We’re putting together the existing infrastructures that each domain has. We’re working with existing disciplinary infrastructures – for example, ELIXIR, which manages biological data, the European Plate Observing System which monitors the Earth’s crust and the Helix Nebula project – to see how we can make them interoperate better.’

What are the main challenges that you’ve seen so far?

‘In the technical area, it’s about making improvements without breaking what’s there. As I said, the infrastructures in the various domains already work. We have to see what we can do to improve sharing without adding extra complications. We’re not trying to replace them but improve them.

‘Part of the challenge is to come to a common understanding of what the potential benefits are. Another area we’re looking at is the rules of engagement. If you want to put your service on this cloud, are there quality thresholds that need to be put in place before you’re allowed to get it online? And where is that bar, so that consumers know what level of quality to expect?’

After the pilot project finishes, what are the next steps?

‘The pilot is not really building much new technology. It's more like a design study, we're looking at what we are trying to build and how will we build it, rather than actually building it. The pilot runs for two years from last January so we’re halfway through, roughly.

‘There are a number of projects starting in the new year. There’ll be the EOSC-hub starting in early January with over 70 partners. It will develop the technological side of the open science cloud.’

There’s been a lot of debate and discussion about how the European open science cloud should proceed. What are your thoughts about this?

‘There’s a balance that needs to be struck between continuing to develop the domain-specific infrastructure and trying to share infrastructures across domains. That’s what most of the debate has been about – where’s the sweet spot between those two. If we could share infrastructure then we could be more efficient. In theory sharing is good, but in practice it can be difficult to get it right.’

When do you think that researchers will be able to start using the cloud?

‘Some of it, very soon. Some parts are already being built now. Then the new projects that will start in January 2017, they’ll start delivering new services about a year from then. And we’ll build from there. It’s not a big bang thing, it’s about improving incrementally.’

Are you optimistic about the European open science cloud?

‘Am I hopeful it will work – yes, of course – I wouldn’t be running this project if not! But I also think it’s a long road. It’s a gradual change, each step helps but we’re (not) going to change everything overnight. I do think it will eventually change how science is done.’