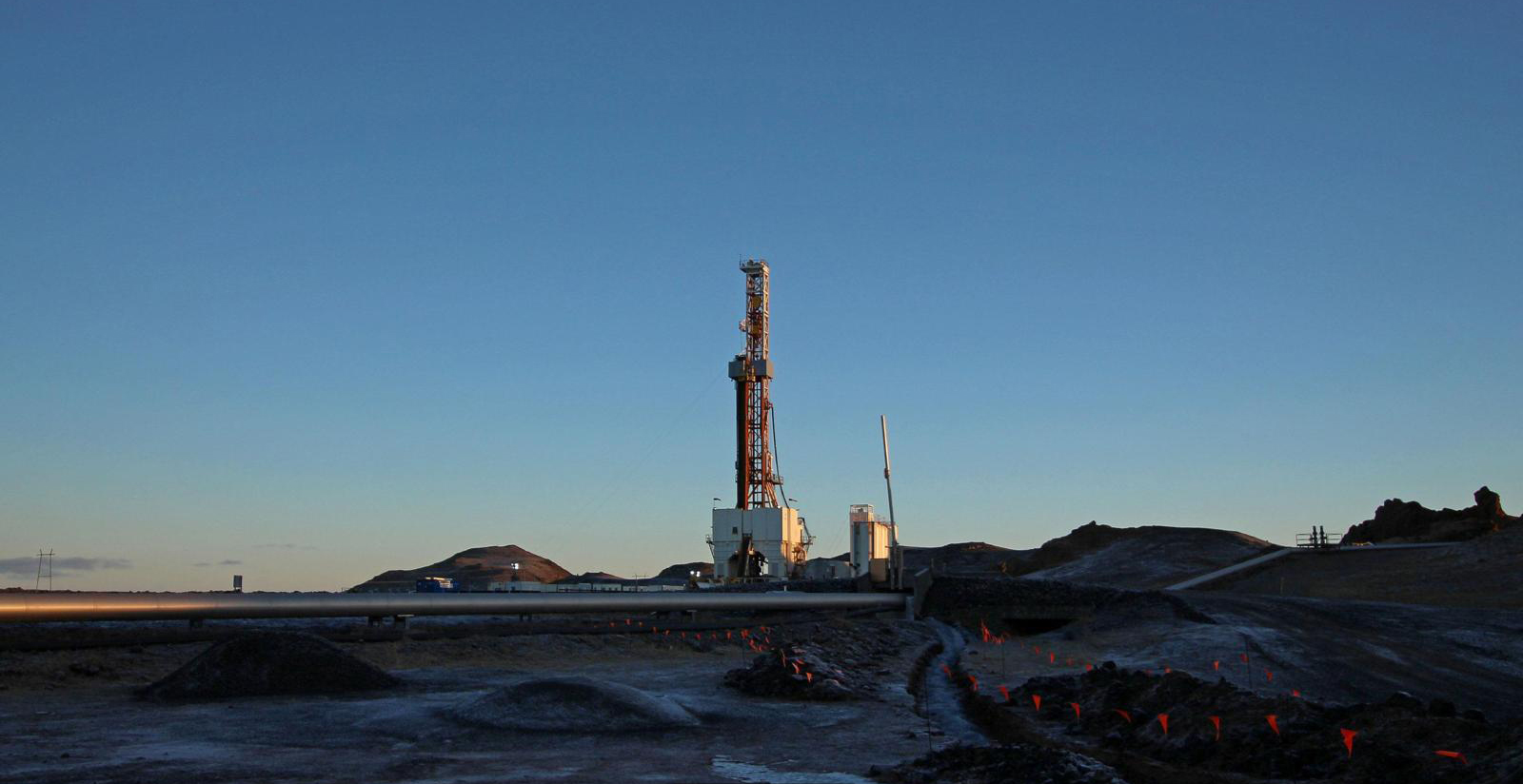 A geothermal well the depth of 10 Empire State buildings could be a new source of clean electricity - if engineers can contain its power. Credit: Chris Baraniuk/ DEEPEGS

Using state-of-the-art drilling technology, engineers have dug more than 4.5 km below the earth's surface in an attempt to harness the endless geothermal energy inside our planet.

For millennia, humans have used the heat energy stored inside the earth – known as geothermal energy – wherever water naturally bubbled to the surface in the form of hot springs, and this heat has been used to produce electricity for over 100 years.

Now, the idea is to generate a more powerful source of clean electricity using the heat of volcanic areas - but the question is whether it can be controlled.

‘We just have to see … whether we are able to tame this monster,’ said Hjalti Páll Ingólfsson, from the Geothermal Research Group (GEORG) in Iceland.

He works on the DEEPEGS project, partly funded by the EU, under which a team of geothermal researchers recently drilled the world’s deepest well in an active volcanic area - the HS Orka geothermal field in Iceland - reaching a depth of 4 659 metres. They hope to tap into the limitless supply of geothermal energy by accessing searing hot water under such extreme pressure that it’s in a supercritical state, which has properties of both a gas and a liquid.

‘Supercritical conditions can increase the power output of a typical (geothermal) well by 10 times,’ said Ingólfsson. ‘That's at least the theory, and our aim with doing this demonstration is to see if the theory is true.’

Geothermal energy uses hot liquids stored inside the earth to create steam that turns a turbine to generate electricity. In a standard geothermal well temperatures may reach 250 degrees Celsius, producing approximately 5 megawatts of power, while the temperature of the new well reaches more than 426 degrees Celsius.

‘Drilling into a volcanic system, we can expect much more heat,’ explained Ingólfsson. However, there are also risks to drilling into volcanic areas. ‘We can expect magma, which we actually did get in another well.’

In addition to magma, which the engineers need to make sure they avoid, volcanic rock contains many faults and cracks, which can cause the drill to get stuck, slowing down the drilling process and increasing the difficulty.

The work of the DEEPEGS team was aided in the exploration phase by IMAGE, another EU-funded project which improved the methods used to assess geothermal areas.

‘Often the earth is compared to the human body,’ said Dr Jan-Diederik van Wees, from the Netherlands Organisation for Applied Scientific Research (TNO) and one of the lead scientists on the IMAGE project. ‘It’s very hard to simply expose it, you need to rely on a few holes you make from the outside.’

'Supercritical conditions can increase the power output of a typical (geothermal) well by 10 times.’

Exploration is a costly part of geothermal development and it can cost millions of euros to produce a single image of a small area. However, it is vital to help engineers know what is beneath them before they start drilling. The IMAGE scientists are testing out cheaper and more effective survey techniques to view what’s underground.

In Iceland, the project deployed sensitive land and sea sensors around existing wells, including the new well, to record the noises produced by movements in the earth’s crust.

Advanced analysis of these signals provides information on the size and depth of water reservoirs deep underground, as well as the presence of magma chambers so they can be avoided.

The team turned the metal casings of geothermal wells into huge electromagnets and measured changes in the magnetic fields to find fractures and fault lines deep in the rock. The multi-faceted approach of the IMAGE project has provided a wealth of information to both current and future geothermal projects.

‘It’s not a matter of depth, it’s a matter of target,’ said Ruggero Bertani from Enel Green Power, which is a partner on both the DEEPEGS and IMAGE projects, as well as a project coordinator of DESCRAMBLE, which focuses on improving the methods used to drill targeted geothermal wells into high-temperature, high-pressure areas.

In order to hit its targets, the project uses surface-sensing techniques to determine the properties of the rock at different levels, some of which were developed and carried out by the IMAGE project.

The team have chosen Larderello in Tuscany, Italy, as their test site. It was here in 1904 that the first electricity was produced from geothermal energy.

Due to Larderello’s unique geology, supercritical conditions are present at much shallower depths, at about around 3 kilometres. To monitor the presence of gases and chemicals associated with supercritical conditions, and anticipate any possible problems, the DESCRAMBLE team will build a state-of-the-art well which uses a technique called mud logging.

‘When you drill, you need to pump down some mud to compensate the friction (from the drill) and to remove the cuttings,’ explained Bertani. By extracting and examining this mud, the drill engineers can get a real-time analysis of the conditions in the well.

The level of survey work and advanced technology required makes these wells more expensive. However, as Bertani explained, even if the well has double the costs, the energy content of fluid is so high that one supercritical power plant can produce the same output as multiple standard wells.

The DESCRAMBLE project has also developed and tested new sensors for geothermal wells that are capable of withstanding extreme conditions better than any device on the market. The knowledge and cost reduction will open up new areas for geothermal energy production.