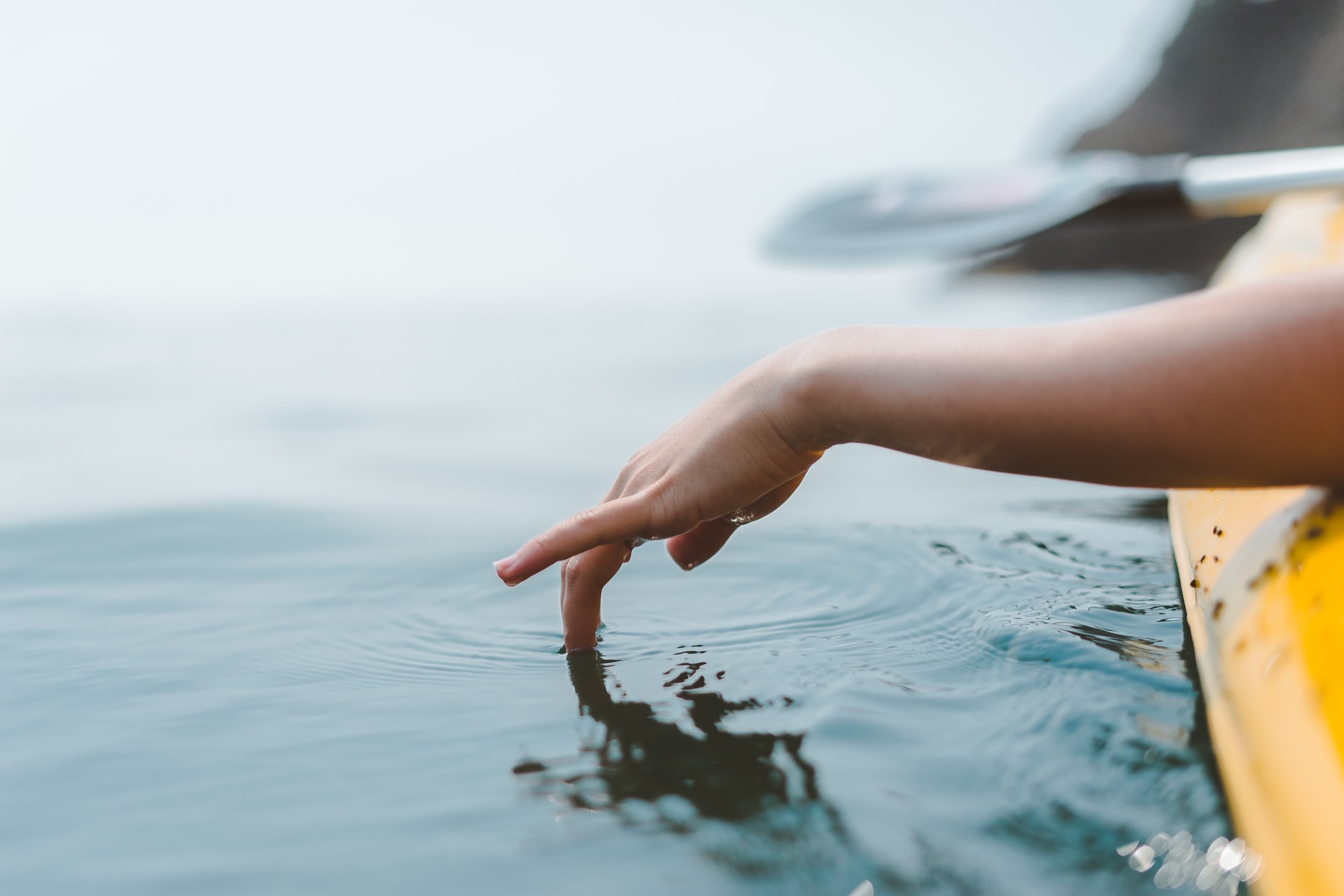 Researchers in Europe are working on elastic membrane patches that mimic how the skin looks and feels and can collect information related to the wearer. Image credit - Aaron Lee/Unsplash

Picture this: You’ve experienced no physical sensation beyond your wrists for years, then a doctor drapes a thin, flexible membrane over your hand and, like magic, you can feel the trickle of water through your fingers again.

This may sound like an outlandish scenario, but it’s not. Researchers across Europe are making rapid progress towards developing elastic membrane patches that mimic the human skin either in looks, functionality, or both.

Electronic skin (e-skin) is categorised as an ‘electronic wearable’ – that is, a smart device worn on, or near, the surface of the skin to extract and analyse information relating to the wearer. A better-known electronic wearable is an activity tracker, which typically senses movement or vibrations to give feedback on a user’s performance. More advanced wearables collect data on a person’s heart rate and blood pressure.

Developers of e-skins, however, are setting their sights higher. Their aim is to produce stretchy, robust, flexible membranes that incorporate advanced sensors and have the ability to self-heal. The potential implications for medicine and robotics are immense.

Already in circulation are skin-like membranes that adhere to the surface of the body and detect pressure, strain, slip, force and temperature. Others are being created to recognise biochemical changes that signal disease. A number of projects are working on skins that will envelop robots or human prosthetics, giving these machines and instruments the ability to manipulate objects and perceive their environments with a high degree of tactile sensitivity. And the dream, of course, is to develop an e-skin that can connect with the central nervous system of the wearer (someone who is paralysed, for instance), thereby restoring sensation that has been lost through disease or trauma.

With their project called PepZoSkin, researchers at Tel Aviv University in Israel are on a journey they believe will eventually turn this dream into a reality. Within a decade, they believe artificial skin patches will be sufficiently advanced to alert wearers to dangers they are not able to perceive naturally.

‘I have a friend in a wheelchair who has no sensation in his legs – he has no idea if hot coffee has spilled on his legs,’ said research associate Dr Sharon Gilead. ‘The idea is that a skin patch on his leg will give a signal – maybe a red light – that will tell him when something is wrong, saving him from a severe burn.

‘This will be a first step. And as we progress on this mission, we will get the thin layer (e-skin) to talk to the nervous system, replacing the sense of feeling that’s missing. Though this is still a little distant, it’s definitely the direction (we’re moving in).’

The Tel Aviv team is developing a skin that will extract and analyse health information without requiring an external source of power. The membrane will be self-powered thanks to a phenomenon known as piezoelectricity. This refers to an electric charge that accumulates in certain materials (including bone, DNA and certain proteins) in response to applied mechanical stress. In short, when you press on an e-skin made from piezoelectric material, even very gently, it will generate an electric charge. Add a circuit, and this electricity can be put to use – it could power a pacemaker, for instance.

For a person with paralysis, the hot spilled drink would create a deformation of the e-skin that would be read by the skin as a mechanical pressure, and this in turn would be translated into an electrical signal. This signal might then trigger that warning light or a sound.

‘As we progress on this mission, we will get the thin layer (e-skin) to talk to the nervous system, replacing the sense of feeling that’s missing.’

Professor Ehud Gazit, who leads the project, explained the significance of finding piezoelectric materials that can be developed into safe products. ‘Our current work on the piezoelectric peptide materials will result, very soon, in lead-free products that work as well as the toxic, lead-filled products that are currently available, except of course our new materials will be far better because they will be safe to use in contact with the human body, and even as implants.’

Prof. Gazit’s team expects to take their work to the next level early next year. By then, they hope to have chosen their organic molecule and optimised it for piezoelectric activity. Next, they plan to develop it into functional nanodevices. They believe that in time, these will be used extensively in biological and medical applications, serving as energy harvesters and biosensors, transmitting vital information directly from human tissue and back to the user or a third party.

Biosensing is also at the core of A-Patch, another e-skin project. With her team at the Israel Institute of Technology (Technion) in Haifa, scientific project manager Dr Rotem Vishinkin has developed a patch based on a ‘crazy idea’ that Professor Hossam Haick, the project coordinator, had almost a decade ago that infectious diseases could be detected quickly and dependably through the skin.

‘We’d already found a way to use breath analysis to discriminate between diseases, so we thought it might be feasible to use a patch on the skin to “smell” the body for conditions,’ she explained.

She was particularly keen to find a quick, non-invasive way to test for tuberculosis (TB) – a highly contagious disease that is particularly prevalent in countries of the developing world. TB affects 10 million people annually and kills 1.4 million. Early detection is important, as transmission can be contained once a diagnosis has been made, and antibiotics are most effective when the infection is new.

Typically, TB is diagnosed from the sputum a patient coughs up, but research suggests that many people are unable to produce the quality sample needed to yield an accurate result. What’s more, it can take up to two weeks for a test result to be delivered, especially in remote communities where samples travel big distances to reach a lab, giving the disease extra days or even weeks to run amok.

The aim of A-Patch is to develop a cheap, efficient alternative to the sputum test. The ultra-thin, flexible patch uses chemical sensors to detect changes in the body’s organic compounds that are triggered when the TB bacterium takes hold. Dr Vishinkin says that soon-to-be-published research funded by the Bill and Melinda Gates Foundation shows the A-Patch, when worn for an hour, delivers a TB diagnosis with a 90% accuracy rate. The team hopes to reduce the wearing time to five minutes, with the patch being applied to the arm.

A disposable A-Patch will cost between one to two US dollars, and require no lab equipment other than an electronic reader that a doctor can use to activate a patch and interpret the results. The Technion team has already lined up an industrial partner specialising in diagnostic kits to help bring the product to market. Dr Vishinkin is hopeful that a viable test will be rolled out within the next few years.

‘We estimate the available market for these kits is 71 million tests per year,’ she said. ‘And because a patch can be used at home, you don’t need to worry about the stigma of going to a TB clinic to be tested. It means people will be more willing to step forward.’

The precise mechanisms for transmitting results from the patch to the reader are still being worked out. ‘We have partners in the fields of electronic circuits, sensors, data analysis to help us with aspects of the project,’ said Dr Vishinkin.

In time, Dr Vishinkin anticipates developing a patch intended for longer-term use – to monitor the effectiveness of a TB treatment regime over a number of weeks, for instance. However, there’s a high chance a patch will become ripped or damaged with extended use, rendering it ineffective. To mitigate this risk, the project’s scientists have developed a mechanism of patch self-repair, which enables the matrix of peptide bonds in a membrane to make fresh networks once damage has been detected, restoring the integrity of the e-skin.

‘Every day brings us closer to our target of creating a fast, reliable, simple diagnostic tool for TB,’ said Dr Vishinkin. ‘And we won’t stop here. What we’re creating is a platform for detecting diseases, not just a kit for a specific disease. We could easily switch to Covid-19 next.’