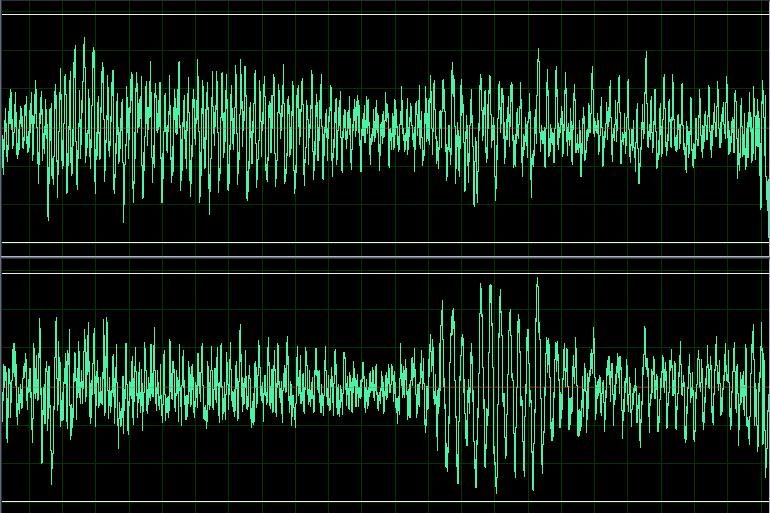 Sound waves similar to the hum of an electric shaver could show which cancer treatments work. ‘Wave sound digital representation splitted channels’ by Fillbit is licensed under CC BY-SA 4.0

A new technology that uses sound waves could show which cancer treatments work, and even help slow down cancer spread.

Cancer survival rates plummet when the disease spreads around the body. An estimated 90 % of cancer deaths are caused when tumours enter other organs or tissues, according to researchers.

One way to slow this down is to identify quickly which treatments are working and which aren’t, and researchers now believe they might be able to do this by sending sound waves into the body.

Body tissue is under pressure all the time due to blood running through vessels, but in cancer tissue this pressure rises as the blood vessels in a tumour are hastily built and rudimentary, exerting more pressure on surrounding body tissue.

In theory, pressure would be a good indicator of whether treatments are reducing the size of tumours. The problem comes in trying to measure it – at the moment doctors need to push a needle in, which can easily skew the result.

Using sound waves – something similar to the hum of an electrical shaver - could finally give them a way to check from the outside, if a research effort underway in Europe is successful.

‘We send acoustic waves through the body and use the MRI (magnetic resonance imaging) machine to visualise the propagation of those waves,’ said Professor Ralph Sinkus of King’s College London, UK.

As part of the EU-funded FORCE project, which started this year, he is trying to refine the sound wave technology – called magnetic resonance elastography (MRE) – so that it is sensitive enough to reveal the pressure exerted by the tumour on normal body tissue.

Changes in the way these sound waves propagate through tissue could be used to show if treatments are working, but they could also allow doctors to select the right drug for their patient. That’s because it could be the pressure itself inside some tumours that dictates how well chemotherapy will work.

‘If the pressure in cancer cells is very high, it could mean that drugs with a smaller molecular weight are better suited to entering the cell – larger molecules might not get through,’ explained Prof. Sinkus.

‘All things being equal, a certain drug might be considered more potent in most patients, but if it’s too large to get into a high-pressure cell, then a smaller molecule could be the better choice.’

‘The big question now is whether we can change cellular behaviour by sending specific waves into tumours.’

His team is working with Sanofi, a pharmaceutical company, to see how MRE could guide treatment choices in breast, liver and brain cancer patients. In this study, breast cancer patients who receive chemotherapy to shrink tumours before surgery will be scanned before, during and after their treatment.

Professor Arnie Purushotham at King’s College London, who led the breast cancer study, said: ‘This is a novel and exciting future for imaging breast cancer with widespread applicability in diagnosis and monitoring treatment.’

The results could enable MRE to be used as a tool for predicting how well drugs work.

Prof. Sinkus explained: ‘We are suddenly moving into streamlining therapy choices individually for each patient. Regular monitoring of tumour pressure could even prompt doctors to switch drug in response to pressure changes observed during treatment.’

The researchers are also measuring the way that cancers actively change their environment to make it easier for tumour cells to spread. In breast cancer, for example, tumours pull on neighbouring cells, making them stiffer.

‘This facilitates the metastatic process,’ said Prof. Sinkus. ‘The cancer is building highways that make it easier for malignant cells to migrate. After all, it’s easier to run on a road than wade through the mud.’

It is thought that the harder cancers pull on their environment, the greater their metastatic potential. ‘In prostate and breast cancer, for example, people general do not die from their primary tumour – they die from metastasis,’ Prof. Sinkus explained.

Through their research Prof. Sinkus and his team have uncovered a potential – but exciting – way that MRE technology could be used not only to observe but to slow the spread of cancer cells around the body.

It is increasingly well established that cells not only need the right chemical milieu to survive, they also rely on their physical environment: they require certain pressures or things go haywire.

‘The big question now is whether we can change cellular behaviour by sending specific waves into tumours,’ said Prof. Sinkus.

The answer is not yet clear cut, but lab tests show that firing waves at model tumour cells can slow down cell division by a factor of two.

‘If you can slow down the spread of cancer in any way you buy time,’ he explained. ‘This could give drugs more time to work or maybe even make cancer cells more vulnerable to destruction. If you can confine the cancer to its original site, you win.’

However, the London-based team has approval to start clinical trials to test its effectiveness in humans and is working with big technology companies including Philips and Siemens. It could be the end of next year before they have data to analyse but, if their theory holds up, rolling this technology out to hospitals around Europe would be swift – most big hospitals already have the required hardware in place.

‘It has been an incredible journey so far,’ said Prof. Sinkus. ‘We started out hoping to measure forces so that we could predict the success of therapies and outcomes for patients. But we have ended up with a technology that might use forces to stall the spread of cancer and improve survival rates.’