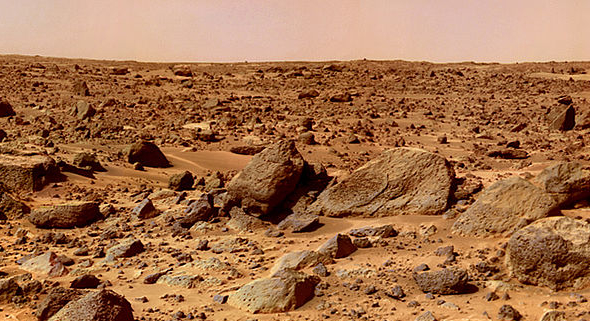 Sending astronauts to Mars poses several large challenges, among them a long journey filled with life-threatening radiation from cosmic ray exposure and solar flares. Not to mention the fact that we haven’t yet worked out how to get them back again.

According to the European Space Agency (ESA), radiation levels are up to 15 times higher in space than on earth, so for astronauts to avoid excessive exposure while travelling to Mars, they will need to get there as fast as possible.

‘It would take six months with classic chemical propulsion (hydrogen and oxygen fuel),’ said Frédéric Masson from France’s National Centre for Space. ‘Nuclear Electric Propulsion (NEP) can get to Mars faster than other methods, if the reactor is powerful enough.’

NEP works by changing nuclear thermal energy into electrical energy which then powers a propulsion system. It is one of the most promising technologies for space exploration as it’s cost-effective and has a much greater fuel-efficiency than classic chemical propulsion meaning there is no need to carry large amounts of rocket fuel.

However using NEP to get to Mars is some way off, as the technology is still at an early stage. Masson is working on the EU-funded DEMOCRITOS project that aims to improve the scientific understanding of NEP propulsion so that a demonstrator can be developed.

He says that using nuclear energy to power spacecraft is safe because the reactor would be contained in a protective shell. This would most likely be made from graphite as it’s mechanically strong and able to withstand high temperatures.

Thank to its fuel-efficiency, the lower weight-to-capacity ratio of an NEP-powered spacecraft means there would also be more room available for scientific instruments and plants that provide a food source for the astronauts, even compared to other emerging alternatives such as solar cells.

It would also help to address a major challenge in a crewed mission to Mars – getting home.

Scientists are still working out how to ensure a spacecraft has enough chemical propulsion to get back into space from the planet’s surface. Some solutions are to send the fuel separately or to generate it on Mars, but the most secure option is to bring the return propellant with you, which an NEP spacecraft can do.

‘It is more efficient and safer to send people to Mars with one spacecraft,’ said Masson. ‘You can make our [NEP] designs bigger and more powerful very easily, there is no change in the technology.’

While DEMOCRITOS is not working on developing the technology to such an extent that it could be used for a manned mission to Mars, project coordinator Dr Emmanouil Detsis from the European Science Foundation says the technology could offer capabilities for other missions.

‘Nuclear Electric Propulsion can get to Mars faster than other methods, if the reactor is powerful enough.’

‘NEP is really the only viable method that can deliver a heavy spacecraft to the outer moons of Jupiter.’

‘The project is a technology study for different missions. If we realise this project in the 2030s, or earlier, this will be comparable to the Apollo missions or the ISS.’

Even with faster engines, however, extended radiation exposure would remain a critical threat to astronauts’ health.

‘Solar energetic particles are the biggest headache to any manned mission to anywhere,’ said Professor Ioannis A. Daglis, a space radiation expert from the University of Athens, Greece.

Solar energetic particles are surges of intense particle radiation that come from sudden eruptions, or solar flares, on the sun's surface. They race through space with such speed that astronauts caught in their path would have little chance of escaping unharmed.

‘We need to be able to forecast solar flare occurrence and the propagation of solar energetic particles in interplanetary space so we can estimate the levels of radiation,’ said Prof. Daglis.

One solution is to send a human mission during ‘solar minimum’, which is the time during the sun's 11-year activity cycle where solar flares are less frequent.

‘I would expect a manned mission to Mars a few years after the next solar maximum, sometime around 2030,’ said Prof. Daglis, who was also the project coordinator of MAARBLE, an EU-funded project which modelled the earth’s radiation belts.

Radiation belts are the regions of enhanced particle radiation surrounding certain planets, like earth and Jupiter, where energetic, charged particles accumulate under the influence of the planet's magnetic field.

‘Our detailed knowledge of the belt structure and dynamics ... helps us find the best path and the best time to pass through it safely. This has been done for the Apollo missions and would also be done for other interplanetary missions,’ said Prof. Daglis.

A crewed mission to Mars would likely travel through the safest path in earth’s radiation belts during a time of ‘solar minimum’, but even so, the risk of solar energetic particles would still be there.

‘There are several ongoing efforts, but we are not yet in a position to predict solar flares,’ said Prof. Daglis.

Avoiding a solar flare by the time a mission reaches Mars would come as a huge relief, but the astronauts wouldn’t celebrate just yet.

A spacecraft enters an atmosphere at such high speeds that it creates a ‘bow shock’, a curved, stationary shock wave that can heat gases close to 10 000 Celsius, causing a dangerous amount of degradation of its wall material or heat shields.

There would also be effects specific to Mars. Dr Thierry Magin leads the AEROSPACEPHYS project, funded by the EU's European Research Council, which ran simulations of planetary atmosphere entries to determine the needs of a spacecraft’s heatshield.

‘During entry to the Martian atmosphere, you would create carbon monoxide which is known as being a strong radiator,’ he said.

At Belgium’s von Karman Institute for Fluid Dynamics, Dr Magin is helping organisations such as ESA to develop heat shields to protect spacecraft from the immense heat, by creating a test environment that mimics the entry conditions for different planetary atmospheres.

‘It is extremely difficult to account for all these atmospheric entry phenomena so what we did was partly reproduce them in our ground facilities,’ said Dr Magin.

This includes a plasmatron, a machine that can recreate the heat conditions for different planets, which vary because of the differing atmospheric gases.

Dr Magin combines data from the plasmatron with results from the ‘Longshot’ wind tunnel, which tests the aerodynamic forces when entering a planet’s atmosphere.

Surprisingly, one of the most promising materials for a Martian heat shield is cork. ‘We study the description of trees in California after forest fires because essentially the structure of the bark is very similar to the heat shield of a spacecraft,’ said Dr Magin. ‘Together with NASA we are now applying our simulation tools to study spacecrafts.’