Drug testing breakthrough sees side effects before they happen 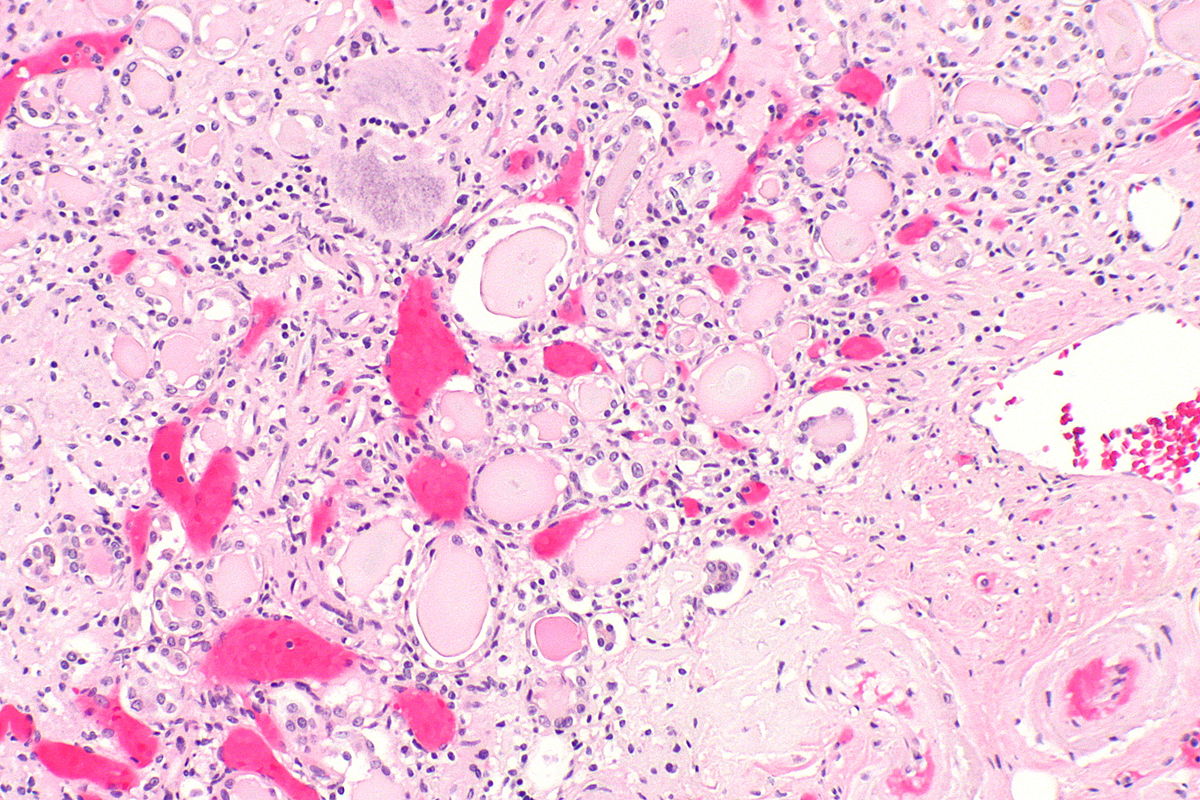 Researchers are figuring out ways to determine if some medications cause side effects like kidney damage. Credit: ‘End-stage kidney - a -- low mag’ by Nephron is licenced under CC BY-SA 3.0

Expensive large-scale trials on no-hoper drugs could become a thing of the past after a European research collaboration worked out how to tell if a medication is likely to cause side effects before they actually appear.

In total, 95 % of all potential drugs fail during development, and half of these fail during large-scale trials, which are usually the last hurdle they have to clear before regulators decide whether to approve them for use.

However, scientists have discovered that some molecules in the body, which could indicate potential side-effects, appear long before there is any major damage to organs, meaning that drug development could be abandoned earlier if a problem is detected.

Since 2009, a group of scientists has scrutinised 100 of these molecules, known in the industry as biomarkers, and discovered a couple of promising candidates for kidney, liver and blood vessel damage.

‘These biomarkers tell us about the likelihood that, for example, a specific patient may progress to severe injury and raise warning flags,’ said Dr Michael Merz, a drug safety expert based in Germany at pharmaceuticals firm Novartis and coordinator of the EU-funded SAFE-T project, which is behind the research.

For example, with many drugs, some patients may show signs of liver injury initially, but then mostly adapt. With the new biomarkers, scientists hope they can spot those patients who are instead on course for unacceptable organ injury.

‘We now have a couple of markers that apparently can predict which patients may progress to liver failure,’ said Dr Merz.

Although many biomarkers for drug safety have previously been investigated by scientists, using them to flag side effects had not been checked in patients in a systematic way.

The SAFE-T project’s mission was to investigate the most promising biomarkers in real patients, such as those receiving cancer drugs known to cause harmful side effects. They also tested for the moledules in tissue samples held by pharmaceutical companies from diabetic, rheumatoid arthritis, tuberculosis and cancer patients, among others.

‘Pharmaceutical companies are already benefitting by using these markers in their clinical trials so that they can see, say, kidney damage, even if it’s only a small percentage of cells being damaged,’ said Dr Thomas Joos, the scientific lead of the project at the University of Tübingen, Germany.

The biomarker approach has received encouragement in the form of letters of support from European and US drug regulatory bodies.

‘Whatever the benefit of a drug to patients, even if making cardiac disease better, it’s unacceptable to cause cancer.’

The project also led to a new company, SIGNATOPE, which plans to introduce predictive tests for kidney injury in dogs, cats, rats and monkeys. This could serve the industry in its quest for new and safe drugs, while also removing the need for unnecessary animal tests.

A separate group of scientists have found a way to predict whether drugs might cause cancer by identifying tell-tale molecules which interfere with how genes work, turning them on or off.

‘Whatever the benefit of a drug to patients, even if making cardiac disease better, it’s unacceptable to cause cancer,’ said Dr Jonathan Moggs, a researcher at Novartis in Switzerland. ‘Cancer risk assessment is especially important for medicines given to patients for long periods of time.'

He coordinates the MARCAR project which, like SAFE-T, has been funded under the Innovative Medicines Initiative, a public-private partnership between the EU and the European Federation of Pharmaceutical Industries and Associations, which aims to speed up the development of better and safer medicines for patients.

One promising molecule identified by MARCAR researchers seems to flag when liver cells are being set back to an early stage, which represents one step on the road towards cancer.

‘This is very exciting, because there is a lack of predictive biomarkers in the field of drug-induced tumour formation,’ said Dr Moggs. ‘A good biomarker might be sensitive enough to be detectable after only a few weeks.’

The idea would be to stack a selection of markers up for testing, strengthening any predictions made. The hope is for regulatory authorities to one day accept some of these tell-tale molecules as alternatives to carrying out two-year animal tests.