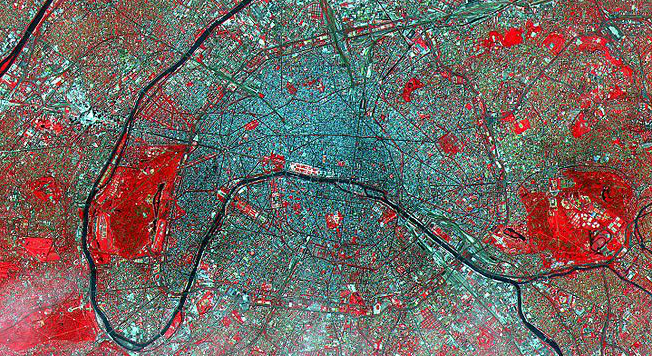 The percentage of the French population living in urban areas has gone from 62 % in 1960 to 80 % in 2015. 'Nasa photo satellite de Paris' by Nasa is in the public domain

Europe’s big cities have been spreading their tentacles into surrounding villages and farmland for centuries. Now, satellite analysis is helping free up old parking lots, disused factories and abandoned roads to keep new developments inside the city limits.

Europe’s populations have been migrating to cities in increasing numbers since the Industrial Revolution, and in response modern suburban neighbourhoods have grown around the old city centres in a process known as urban sprawl.

‘Are there vacant urban lands that can be identified and used, rather than simply expanding into the countryside?’ said Tomas Soukup, a senior consultant in remote sensing applications at Czech geo-information services firm GISAT.

He is coordinating URBIS, an EU-funded research project which is using open geospatial data from the European satellite earth observation programme Copernicus to show policymakers and planners where the disused factories and unused parking lots are that could be turned into new housing.

‘The aim is to reduce new development in natural areas, or greenfield sites, and to try to concentrate on more efficient land use in the cities,’ Soukup said.

That could mean reusing open urban land, or redeveloping urban spaces that no longer suit their previous use.

With data from sources such as the Copernicus Urban Atlas, planners can use the system to identify features such as parking lots, pavements and roads, or even to pick out green areas or water resources.

Soukup said the three-year project, which runs until 2017, has also developed services that allow users to identify and assess urban areas using various characteristics of their land-use potential for future development.

‘We can also look at the context of the city, so we see not only the potential for further development, but also how this potential has been used in previous years,’ Soukup said. ‘So we can see how the city really evolved over a period of time.’

While the URBIS system provides information about the physical aspects of urban development, these are not the only considerations in urban expansion and in deciding how land is used. Other EU-funded research projects, such as Dr Vera Vicenzotti’s SPRAWLESCAPES, are considering the impact of culture in planning, urban landscape and expansion.

‘The discourse around urban sprawl is often very quantitative and I think it is important to emphasise the importance of the cultural and aesthetic issues,’ said Dr Vicenzotti, who is based in the Department of Landscape Architecture, Planning and Management at the Swedish University of Agricultural Sciences.

‘The aim is to reduce new development in natural areas.’

‘If you think in terms of sustainability – economy, ecology and social issues – depending on how you define social issues, culture and aesthetics are often ignored,’ she added.

Dr Vicenzotti says that, given her studies comparing Germany and Sweden, she believes it is important for people to learn from each other, but that there is no one-size-fits-all way to achieve sustainable urban development.

‘If you want to plan sustainably and rely on a general model, you may not see certain things that are very important for the people who live in this landscape,’ Dr Vicenzotti said. Even the understanding of terms such as ‘urban sprawl’ and relations to the landscape, can differ widely, given the underlying culture and history.

By addressing differences and similarities in approaches to the discourse of urban sprawl within planning, Dr Vicenzotti hopes to contribute to the European Landscape Convention, set up to promote the protection, management and planning of European landscapes.