The disappearing implants that might just save your life 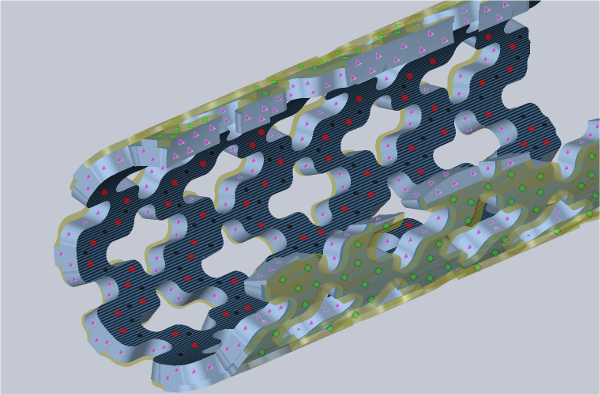 A stent under development could reopen blocked arteries and then safely dissolve into the body after curing cardiovascular diseases. Image courtesy of ReBioStent

Scientists are developing a spring-like implant that reopens blocked arteries, dissolves within a year and releases drugs as it fades away.

Heart disease is Europe’s biggest killer, and in 2012, the most recent year for which full data is available, 1.9 million people died of heart-related problems, representing 38 % of all deaths.

The new devices work just like a typical stent – a small mesh tube that surgeons use to reopen narrow or weak arteries. When placed in the artery, stents can expand like tiny springs to force vital blood vessels back into shape.

Because metallic stents are foreign bodies, there is always a risk of complications including inflammation or rejection, blood clotting and the artery narrowing again. Yet surgically removing the devices also carries risk. While the standard metal stent remains in place forever, unless it is removed, the new generation of so-called bioresorbable stents are made of materials that can safely dissolve into the body after curing cardiovascular diseases.

Dr Xiang Zhang, principal consultant at materials firm Lucideon and Royal Society Industry Fellow at University of Cambridge, UK, says stents should solve the problem they were designed to fix in a matter of months. ‘Six months is usually enough to cure the disease. After that, you don’t need a stent anymore,’ he explained.

A bioresorbable stent which can take over two years to dissolve is now on the European market, but Dr Zhang, who leads the EU-funded ReBioStent project, says this resorption time can be halved using new materials which are easier for manufacturers and surgeons to work with.

‘The resorbable stent technology that has just hit the market poses many challenges for scientists and engineers,’ he said. ‘The material itself has drawbacks in terms of processing, and the surgery is difficult. Our project seeks to solve these problems and to make Europe the world leader in the field of bioresorbable implants.’

Dr Zhang and his team are working with a so-called hybrid material which combines inorganic and organic biomaterials to make products that are tougher and stronger than current devices yet bioresorbable. ‘The material used at present, poly-L-lactic-acid, is brittle and difficult to handle. We are developing a reinforced resorbable stent,’ he explained.

Coatings can be added to the surface of the stents to reduce the risk of attack by the immune system. Better still, the stents can be embedded with medicines that prevent the artery from clogging up again.

Drug-eluting stents – metal stents covered with medicines – already exist, but Dr Zhang is building the drugs into the stent itself. Then, as the stent begins to dissolve, the medicines are gradually released.

The good news is that patients may not have to wait too long for this innovative product. While the Cambridge-based consortium believes their stent would move the field forward, its pathway to regulatory approval has already been paved by other products.

‘The existing resorbable stent is in use and has been shown to be safe, and the drugs we are adding are the same as those used with metallic drug-eluting stents. These are already approved so it should be much easier than if we were starting from scratch,’ said Dr Zhang.

He says pre-clinical trials should be finished by the end of the year, with clinical studies starting as early as 2017. With around three years of work to do after that, Dr Zhang’s ‘disappearing stent’ could be available by 2020.

It’s not only cardiac implants that are being made with bioresorbable materials. One of the fields to benefit most from this new wave of disappearing implants is orthopaedics. Many of the screws and pins that hold replacement bones and joints in place are engineered from material that eventually dissolves once the patient’s own bones are strong enough to do the job on their own.

‘We need to make the production phase more viable.’

Despite the considerable potential of bioresorbable implants in orthopaedic surgery, development times for new devices are long and the products can be challenging to manufacture, according to materials engineering expert Dr Marion McAfee of the Institute of Technology Sligo in Ireland.

‘Bioresorbable materials have a high cost and are difficult to process, resulting in high scrap rates,’ she explained. ‘There are a lot of patents for bioresorbable materials, but one of the reasons we have not seen more products on the market is the difficultly companies face in scaling up manufacturing. We need to make the production phase more viable.’

Dr McAfee led a team of academics and small and medium enterprises (SMEs) on the recently-finished Bio-PolyTec project which used sensor technology to monitor the production of bioresorbable implants.

‘In general heat and pressure are required to form the material into the required shape, which can cause the material to degrade,’ she explained. ‘However a lot of the quality checks occur only after the product is formed. We’ve been working on sensors that allow us to analyse the material in real time during production.’

This means that instead of waiting a day to find that the product is not, for example, of uniform molecular weight throughout, companies would know instantaneously if parts of a product were not up to the standard required.

‘We can shine a light source onto the polymer during production and then collect the light that’s transmitted through the material. We then analyse the wavelength spectrum of the light and calculate the molecular weight of the material,’ Dr McAfee says.

The sensors have already been tested at one of the project’s industrial partner sites and the team is now looking to commercialise the technology.

They may be tricky to produce but the more researchers learn about bioresorbable materials the more versatile they appear. In addition to ‘mechanical’ tasks such as keeping arteries open or holding bones in place, they can also play a role in drug delivery.

Dr Helena Azevedo, at Queen Mary University of London, UK, is leading the CancerHydrogelPatch consortium which plans to use a bioresorbable hydrogel to deliver drugs to cancer patients recovering from surgery. After surgery for colorectal cancer, the main risk to patients is that their cancer cells will come back.

‘We are interested in using hydrogels impregnated with drugs which can be locally released to target tumour cells,’ Dr Azevedo said. ‘The first goal is to kill the cancer and the second is to regenerate the tissues affected by the surgery.’

The hydrogel, which would be injected into the body wherever it is needed, could be loaded with proteins that provide a scaffold around which damaged tissue can be rebuilt. ‘We also want to use the hydrogel platform embedded with stem cells to help get damaged tissues back to normal,’ said Dr Azevedo.

Like other biomaterials, the beauty of the natural polymers that the researchers are using is that they can be degraded by the body’s enzymes, forming non-toxic substances that are easily resorbed.

While the project is still at an early stage, it promises to provide yet another example of the power of bioresorbable materials in helping to improve human health – before quietly fading away.