Crime fighting with microbes - how bacteria are helping figure out whodunnit 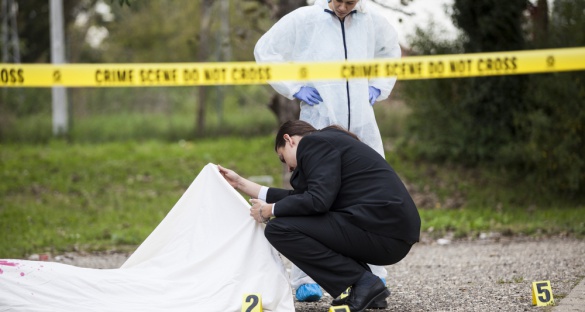 New research into the DNA of microorganisms in the soil at crime scenes is helping detectives solve cases. Credit: Shutterstock/ LukaTDB

Flesh-eating maggots and soil from a crime scene are revealing new clues for detectives thanks to 3D imaging and gene sequencing techniques - and it could soon help forensic investigators pinpoint more accurately where and when suspects have broken the law.

From Sherlock Holmes to CSI: Miami, crime scene investigators have long relied on scientific methods to turn routine observations into case-cracking evidence. Today, developments in the biomedical sciences could double the precision with which police estimate the time of death of victims, and help them follow the movements of suspects back in time.

A group of researchers across Europe is unravelling clues locked in one of nature’s most ubiquitous location trackers: soil stains. ‘Soil is all over the place,’ said project coordinator, Professor Edouard Jurkevitch, at the Hebrew University of Jerusalem, Israel. ‘You step on it, drive through it, carry particles of it on your clothes.’

If soil gathered from a suspect could be matched to its point of origin, the smallest stain might offer prosecutors insight into their past whereabouts.

‘Each teaspoon of soil contains more bacteria than there are people on the planet,’

Appraising the provenance of soil samples currently requires expensive case-by-case studies. Prof. Jurkevitch is working on an idea that could standardise the practice and make it compatible with equipment already available in forensic laboratories today. Rather than look at the minerals within each sample, he focuses on the life forms teeming between them.

‘Each teaspoon of soil contains more bacteria than there are people on the planet,’ said Prof. Jurkevitch. Because different geographic regions foster distinct bacterial species, a census of microbes in a soil sample could, in principle, locate its place of orgin.

In practice, however, it is impossible to manually sort through the thousands of bacterial species constituting each local population.

The research project, known as MISAFE and funded by the EU, is working around this problem by using rapid genetic sequencing techniques. Tools for studying DNA have leapt forwards over the past decade and consortium partners are field-testing off-the-shelf kits capable of cataloguing the microorganisms present in a given environment.

Instead of sequencing entire genomes, the researchers save time by only sequencing one set gene in each of the microbes. This sequence provides enough of a unique identifier for each microbe to allow scientists to determine the ecological diversity of each soil sample.

‘The technique cannot yet rule out coincidences when matching soil samples to crime scenes,’ he said. ‘But it can state with 99 % confidence that two soils do not come from the same place.’ In this way, soil tracing is already providing supportive evidence to disprove false alibis in court.

However, soil is not the only sleuth provided by nature. Crime scene investigators also rely on partners in the animal kingdom to estimate the time of death of victims.

‘Within a day of most murders,’ said forensic entomologist Dr Daniel Martín-Vega, ‘insects will have begun to lay eggs in the body of the deceased.’ Police routinely estimate the minimum post-mortem interval of bodies by measuring the length of the maggots growing inside them.

One limitation of the technique is that, for older crime scenes, the first generation of maggots may have turned into pupae, the intermediary development stage between a maggot and a fly.

These pupae are surrounded by a hard, opaque shell and comparatively little is known about what is going on inside them. Opening them up to investigate the development stage of the fly interrupts the life-cycle experiment and, in the case of forensic studies, destroys irreplaceable crime scene evidence.

Under a Marie Skłodowska-Curie fellowship, Dr Martín-Vega has joined the team of Dr Martin Hall at the Natural History Museum in London, UK. He is using a 3D imaging technique called microcomputed tomography to scan pupae with X-rays and record how much radiation is absorbed at each angle of measurement.

A computer algorithm then works backwards from these results, like a Sudoku player, to reconstruct the density at each point in space inside the pupae shell, providing a 3D map of the developing fly and clues as to its age.

‘The technique is revealing how and when separate organs metamorphose,’ said Dr Martín-Vega. He is still investigating how external conditions, such as temperature, impact the development process in order to apply it to forensics. ‘If the investigation method proves scientifically robust, it could double the precision of post-mortem interval estimates from pupae.’

In spite of these crime-fighting objectives and the occasional call for help from police investigators, Dr Martín-Vega describes his work as basic science. ‘I am interested in the biology of these insects,’ he said. ‘My work is no different from that in any other scientific discipline.’

Prof. Jurkevitch agrees that the societal dimension does not affect how interesting he finds his research, but it does bear down on the burden of responsibility. ‘Scientists have high standards for the integrity of the results that we publish,’ he said. ‘This is all the more important in forensics, as the methods that we are developing ultimately affect people’s fates.’