Could there be a European Google? 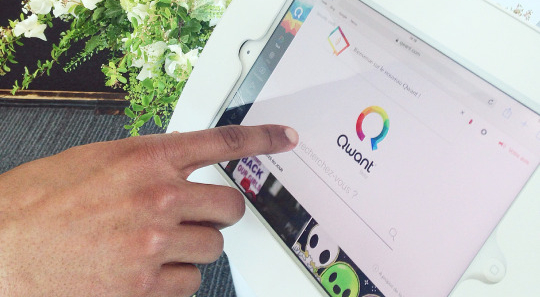 You’ve heard of Google, but you probably haven’t heard of Qwant…. yet. This French search engine, based around the concept of privacy, is just one of a number of companies to receive growth finance from the EU to promote innovation and help European companies compete with their American rivals.

Historically, innovative companies that are looking to grow often face an uphill battle for funding in Europe, but in 2014 the European Commission and the European Investment Bank Group launched a suite of financial products called InnovFin - EU Finance for innovators. The idea is to offer finance where the market is failing to do so and boost the number of high-value companies in Europe.

Qwant, which was launched in France in 2013, received EUR 25 million to roll out its product to a wider market. Its ambition is to provide people with a European search engine they can use instead of relying on ones from the US.

‘You have an alternative in Russia with Yandex, you have (other search engines) in South Korea, in China, in Japan, you even have some in South America and in the US,’ said Éric Leandri, co-founder and chief executive of Qwant. ‘At the end of the day the real idea here is to bring to Europe a European index and a European alternative.’

Qwant launched in Germany in 2014 and in 2015 they released Qwant Junior, a version of the search engine for children aged 6-13 that filters out results relating to sex and violence. The volume of users has doubled in the past six months and now stands at 20 million each month.

According to Jean-Manuel Rozan, Qwant’s other co-founder, the big selling point of Qwant is that it doesn’t keep track of user behaviour. ‘The need, we felt, was for a search engine that respects the privacy of people and that doesn’t keep track of the searches that people make,’ he said. ‘(It) is neutral, meaning that it shows the same results to everyone, but also, as a consequence of that, opens up… all the content on the internet.’

He says that while he believes there is demand for such technology, finding European finance to grow a company is difficult. ‘There is a tradition in Europe to finance growth based on existing revenues and not on the value of assets or the value of the audience. In America they have understood perfectly that first you invest and then you have an audience and then you have the revenues.’

The InnovFin loan they have received from the European Investment Bank (EIB) is what’s known as mid-cap growth finance - money loaned to companies to scale up their operations, whether it be building a factory to start production or rolling out an idea across Europe.

Since 2014, more than 700 companies have applied for mid-cap growth finance, out of which the EIB has financed 30.

‘Growth capital and venture loans is something that is not existing in mainland Europe,’ said Hristo Stoykov, head of mid-cap growth finance at the EIB. ‘I think we are filling a real gap here. The things that these companies are trying to do, I don’t think they would be able to do them with the available capital right now.’

Another recipient of growth finance is Jennewein, a German biotech company that makes functional sugars – rare sugar molecules that can be used in nutritional, cosmetic and pharmaceutical products. For the last 10 years they have been working out how to make a supplement that is as close as possible to human breast milk.

Their product has been proven to stop diarrhoea and within the last year they have begun producing it on an industrial scale as an ingredient for powdered baby milk. Their customers are baby nutrition companies, but they are also looking into the possibility of directly marketing a supplement to consumers.

‘The things that these companies are trying to do, I don’t think they would be able to do them with the available capital right now.’

They have received EUR 10 million in growth finance from the EIB and are using it to construct a factory in Germany to produce the supplement in powdered form.

‘What the EIB (is) offering, not just for biotech companies, I think it’s a healthy thing,’ said Glyn Brookman, director of sales and operations. ‘Jennewein started 10 years ago as a research and development house and it’s taken us this long to get to here. The world market dictates a quick buck and that just won’t work for biotech companies.’

It’s not only the new kids on the block that are getting a boost for innovation. Türk Traktör, a Turkish tractor company set up in 1954 has been granted a EUR 35 million loan from the EIB to help reduce the environmental footprint of tractors.

‘By nature, tractors are things that pollute a lot and consume a lot of fuel,’ said Marco Votta, the company’s chief executive. ‘A constant stream in innovation is all the work done around the engine in order to make it less polluting and reducing constantly the amount of fuel consumed.’

The money will be used to develop a new engine that will be ready for production next year, as well as to build the necessary infrastructure to manufacture and test the engine. Votta said they went to the EIB after recommendations from other Turkish companies.

‘They were very supportive. It’s not only a financial issue but also a matter of understanding what it will be used for, to have some openness and also flexibility in understanding and working together to overcome any problems. We are very satisfied.’

He believes that despite the US having a great reputation for innovation, the EU’s approach is more suited to Turkey.

‘Everybody loves to read the stories about (a) great innovator and scientist in the US making millions of dollars but, in reality, I think the same people, (if they) magically moved to Turkey, would face a very difficult situation. Whereas culturally, but also in terms of economic environment, the European approach to that - a mix of public support, private innovation, support from the academic institutions and so on – looks like something which has more chances of success.’