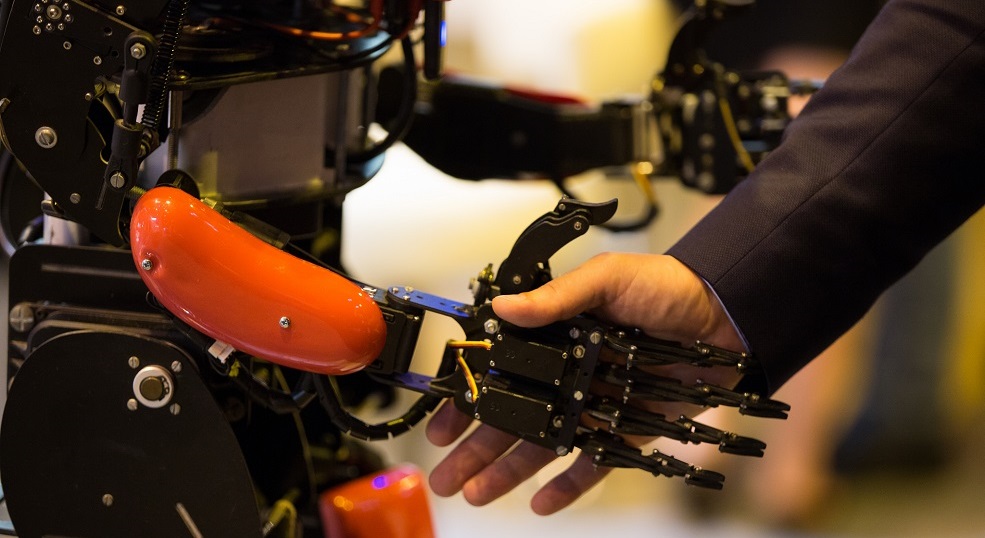 We need to make sure everyone benefits from new technologies so as not to widen inequality, a social innovation conference has heard. Credit — by École polytechnique - J.Barande, licensed under CC BY-SA 2.0

New technologies like artificial intelligence, self-driving vehicles and the internet of things could be used to reduce the widening economic gulf that is emerging in modern societies.

Experts attending a major conference in Lisbon to discuss innovative ways of solving societal problems have set out an ambitious vision for how the fourth industrial revolution – the crossover between the digital, physical and biological worlds to create new ways of doing things – could help to reshape society.

They warned that while globalisation has helped to tackle poverty in many parts of the world, it has also widened the gap between the rich and poor.

In Europe, the poorest 10 % of people earn just 2-4 % of the total income in their countries while the richest 10 % account for more than a fifth of the income.

But by helping ordinary people to use technology to develop innovative solutions to the problems that can leave them marginalised, some of these inequalities could be overcome.

‘Digital revolutions offer extraordinary opportunities to correct these disparities in ways that will impact everyone,’ said Anne Hidalgo, the Mayor of Paris, France, who has been a leading proponent of new social projects during her time in office.

She pointed to technologies that manage the way energy is used more efficiently in people’s homes and new types of insulation as one example. ‘They can reduce the energy cost in our cities, but only if these technologies are affordable for everyone.’

Hidalgo was speaking at a conference partly organised by the European Union, called ‘Opening up to an Era of Social Innovation’, which was held in Lisbon on 27-28 November.

It brought together people including entrepreneurs, policymakers, funders, scientists and politicians to discuss the future of European social innovation.

Hidalgo’s comments were echoed by Geoff Mulgan, chief executive of Nesta, a UK-based foundation that supports innovation. He explained that new technologies had the ability to empower communities to overcome the socio-economic difficulties they face.

‘We are in an era where internet platforms are allowing radical new ways to improve mobility and experiments in the sharing economy,’ he said.

‘There are many parts of Europe where rural bus services have been cut back due to austerity, but social innovation can re-link villages together by using internet platforms that allow people to share rides in a much more structured way. This can help people to access services they have been cut off from in recent years.’

Mulgan believes a major change in the way governments, businesses and the public think about science and technology may be needed in order to make it more socially beneficial.

He warned that unless this happens there is a risk that technologies like artificial intelligence and self-driving vehicles can widen social inequalities further by pushing people out of work.

‘There needs to be wider participation in shaping the fourth industrial revolution,’ he said. ‘These technologies need to be not just created by big companies, governments and universities, but by ordinary citizens too.’

For this to happen, however, people will need the skills and knowledge to help them take part.

One project, called Code For All, is doing just that with boot camps that help to teach people who are unemployed in Portugal how to write computer programming code.

With the skills they learn over a 14-week period, the participants - who are aged between 18 and 50 years old - can look for jobs in the IT sector.

Domingos Guimarães, co-founder of Code For All, said that in little over the two years that the project has been running, they have had 250 people take part and 96 % have found jobs afterwards. Some have even gone on to launch their own companies.

‘There are around 500 000 jobs available in Europe at the moment for developers,’ he said. ‘The great opportunity of code jobs is that the market is so desperate for people like this, (so) it is much harder to discriminate against people because of their background.’

Code For All has now also set up a coding project with the Aga Khan Foundation, an international not-for-profit development agency, in the Pendão area of Lisbon.

‘This is one of the most difficult neighbourhoods in all of Portugal,’ explained Guimarães. ‘The kids here have a future either serving fast food, or as drug dealers or hanging around with no jobs.

‘We are building a project that will spend two to three months preparing them for a boot camp and then insert them into the job market.’

It is an approach that is being replicated in projects around the world, such as the online coding school codecademy, which offers adults the chance to learn new skills for free, and similar initiatives in schools.

With this sort of digital literacy, people should also be able to play a bigger part in building the sort of social technology tools that people like Mulgan believe are needed.

But Mulgan also argues there needs to be new ways of funding projects that are trying to use technology to tackle inequalities in Europe.

‘We perhaps need a shift in purpose,’ he said. ‘Most new technologies are developed first for the military, then business and then social uses come way down the line. A good example is with drones - they were first used by the military, then retailers for deliveries and only belatedly are cities in Europe thinking about what they can do for health care or other social purposes. There is nothing natural about that and I think it can be shifted.’

At the conference, Carlos Moedas, the EU’s commissioner for research, science and innovation, set out his vision to have ‘mission-driven’ science at the heart of the EU’s next major research funding programme.

Luis de Melo Jerónimo, project manager of the human development programme at the Calouste Gulbenkian Foundation in Portugal, which co-organised the conference, said that people on the ground should be involved in social innovation.

‘We also need to recover the trust of the people who feel like they have been losing out under globalisation,’ he said. ‘We need to make sure they feel they are part of the solution.’

He points to another project that has been supported by the Calouste Gulbenkian Foundation, called the Ubuntu Academy, as a way this might be done.

It is teaching young South Africans leadership skills that they can then use to lead innovative projects and enterprises in their local communities. Currently being run as a pilot project, there are hopes it may be expanded to other locations around the world.

‘The globalisation model that most western and developed countries have followed over the last few decades have not worked for many people,’ Mulgan added. ‘They have made a minority richer but many others have been left with less. So there has to be a different model which addresses their need for work, prosperity and meaning.’