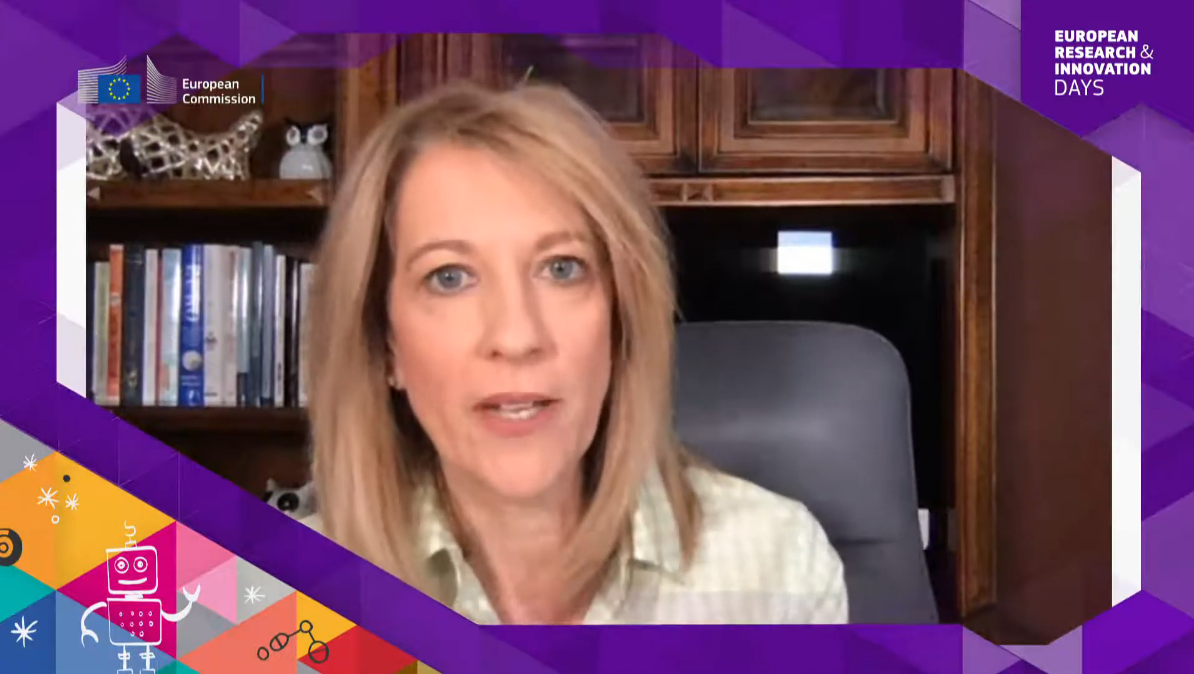 Having the euro means that many EU countries are no longer in control over their own currencies and the European Central Bank will play a critical role in Europe’s post-coronavirus recovery, says Prof. Stephanie Kelton. Image credit - European Commission

Speaking about how Europe can best achieve a sustainable and inclusive recovery, Stephanie Kelton, a professor of economics at Stony Brook University in the US, said: ‘(What countries need) is a level of sustained support, of investment, on a wartime footing.’

But, she warned that having the euro means that many European governments do not now have control of their own currencies – removing a key mechanism that governments typically use to stimulate their economies and potentially jeopardising this investment.

‘If the question is: “What can governments in Europe do to provide the financing?” the answer is, for most of the governments in the EU, not all that much,’ she said.

She said the role of the European Central Bank (ECB) in continuing to ensure that governments can access affordable financing on the scale that they need will be crucial. Currently, the ECB has a series of measures to mitigate the economic impact of the pandemic, including an emergency purchase programme to lower borrowing costs and increase lending in the euro area.

Prof. Kelton's comments came as part of a broader discussion about how to shape Europe’s economic recovery to not only recover from the coronavirus pandemic but also in a way that will enable us to tackle the climate emergency, inequality and other major challenges.

‘We need responses and visions and economic frameworks that bring these (challenges) together and don’t try to respond to them one at a time,’ said Kate Raworth from Oxford University in the UK. She has developed a model known as doughnut economics, which sets out a framework for an economy which meets everyone’s basic needs within the means of the living planet.

‘The idea of the doughnut is to leave no one in the hole in the middle, falling short on the essentials of life – without food, water, health, transport, housing, income, gender equality, political voice,’ she said. ‘If we use Earth’s resources too much, in the wrong way, we push ourselves over an outer limit. We cause breakdown of the life-supporting systems on which the planet depends.’

She says this kind of vision is vital. ‘If we don’t know where we’re going, how the heck do we know what to do tomorrow?’

Prof. Kelton said that as countries start to move away from measuring economic success purely in terms of GDP growth and towards broader indicators such as wellbeing, this should be reflected in the criteria for giving governments access to funds. ‘We need to replace fiscal targets with climate targets, with social targets - we need a real rethink here,’ she said.

Mariana Mazzucato, an economics professor at University College London (UCL), UK, said that Europe was experiencing ‘a real Marshall moment’ – a reference to the post-World War II Marshall plan to rebuild Europe with US financing – which she said can be used to achieve wider goals, such as tackling the climate crisis.

‘We have a very large recovery fund, and for the first time in a long time, that fund is conditional on the member states actually investing, having a plan around climate, digitalisation and health,’ she said. ‘It’s no longer about cutting deficits – this time it’s about: “Where’s your plan?” And I think this is a really important moment.’

However, with reports that many of the world’s economic recovery packages are likely to increase greenhouse gas emissions, Sandrine Dixson-Declève, chair of the EU’s expert group on the economic and societal impact of research and innovation (ESIR) , warned of a ‘disconnect’ between the aspiration to build a wellbeing economy that is resilient against future crises and what is happening on the ground.

‘Right now, what we’re seeing is a real problem of going back to business as usual in the way that budgets are being spent.’

But Carlota Perez, a researcher and expert in technology and socio-economic development, and an honorary professor also at UCL, said this didn’t have to be the case. ‘(There is) a big confusion that exists today. Most (economic) growth advocates think that green is an obstacle, and many green advocates want to stop growth. Saving the planet is the best way to save the economy.’

‘(There is) a big confusion that exists today. Most (economic) growth advocates think that green is an obstacle, and many green advocates want to stop growth. Saving the planet is the best way to save the economy.’

Over the course of the three-day conference from 22-24 September, which brought scientists, entrepreneurs, policy makers and the general public together to discuss the future of European research and innovation, there was broad agreement that the coronavirus pandemic provides a pivotal moment to renew efforts to tackle longer-term challenges such as climate change and biodiversity loss, as well as to reshape our economies.

Mariya Gabriel, EU Commissioner for Innovation, Research, Culture, Education and Youth told the first day’s audience: ‘I think that in every crisis there is an opportunity. We have seen in this crisis an opportunity to overcome challenges, to innovate, to propose new solutions and new ways of doing things. And I think Covid-19 has definitely shown ... how important research and innovation and education is to provide solutions.’

But in addition to optimism – particularly about the potential for research and innovation to build a fairer, sustainable and resilient Europe, there was an undertone of urgency.

‘We live in an extremely complicated time,’ Frans Timmermans, an Executive Vice President of the European Commission told the conference. ‘It is a time of great turmoil, it is a time of tectonic change because humanity is faced with a challenge to its very existence through the climate crisis, the biodiversity crisis.

‘At the same time, the geopolitical relations are changing very quickly – because of demographics, because of the economy – and on top of all that we’re in the middle of an industrial revolution.

‘We all need to adapt to a different future now.’