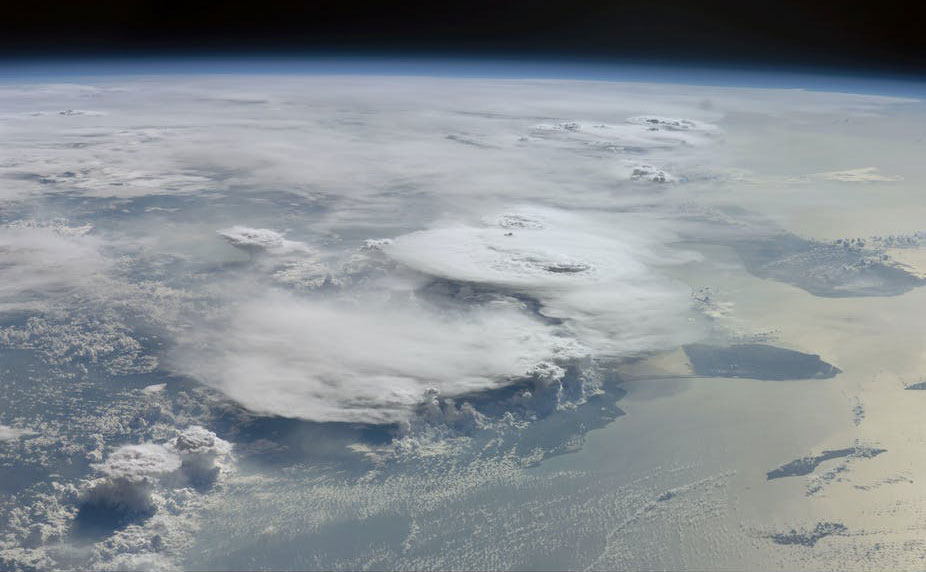 Tropical thunderstorm clouds are unique because they self-organise even when the conditions below and above them are uniform, and do so with 'memories' of past formations. Image credit - NASA Johnson Space Center

Above the Atlantic Ocean, puffy white clouds scud across the sky buffeted by invisible trade winds. They are not ‘particularly big, impressive or extended’, says Dr Sandrine Bony, a climatologist and research director at the French National Centre for Scientific Research. ‘But they are the most ubiquitous clouds on Earth.’

Clouds are one of the biggest question marks in global climate models, and a wild card in predicting what will happen to the climate as temperatures rise. They play a vital role in how much of the sun’s radiation makes it into and gets trapped in our atmosphere. The more clouds there are, the more radiation bounces off their tops and is reflected back into space; it also means that if there are more clouds, the radiation reflected by Earth gets trapped. Historically researchers have struggled to understand cloud properties, how they currently behave, and how they will react to the increased temperatures caused by climate change.

It comes down to an issue of scale, explains Dr Bony. From the microscopic interactions of atoms to atmospheric currents that act over thousands of kilometres, many forces affect how clouds form, their composition and behaviour.

The clouds resembling cotton wool in the Atlantic, which Dr Bony and her colleagues study, are a good example. ‘A little change in their properties has a huge impact on the global radiative balance (the balance between how much of the sun’s energy makes it into Earth’s atmosphere and how much escapes),’ she said. Because these fair-weather clouds (known as cumuliform clouds) are so common, a small change carries ‘huge’ statistical weight in the global climate.

'It’s the biggest question – there is no bigger question,’ said Professor Bjorn Stevens, a director of the Max Planck Institute for Meteorology in Germany and Dr Bony’s co-leader on the EUREC4A project which set out to investigate these fluffy white clouds. ‘For 50 years, people have been making climate projections, but all of them have had a false representation of clouds.' These projections, he says, have suffered from an inadequate understanding of the factors determining how cloudy climate will be and have not been properly represented in the models.

The EUREC4A project, which began as a modest field experiment to measure air motion and cloudiness, attracted numerous partners and expanded in scope. In the end, it encompassed five crewed and six remotely piloted research aircraft, four ocean-going research vessels, a flotilla of drifters and gliders, an array of satellites, and measurements from the Barbados Cloud Observatory.

‘The experiment grew in complexity and scope to address a number of other fascinating questions,’ said Prof. Stevens, such as how much and how easily clouds rain, and how eddies in the ocean and the clouds above affect each other. The team is currently writing up their results, and hopes that their measurements will provide the answers to these questions. ‘We will be setting a ground truth for a new set of climate models,’ he said.

For Dr Bony, the next step extends beyond understanding cloud properties and the area they cover.

‘Now, we’re discovering that it’s not only the total area, but also the way that clouds are distributed and organised,’ she said. The patterns that they form could also influence how they block or absorb radiation, and this information could have implications for the role of clouds in climate change.

Dr Jan Härter, an atmospheric complexity specialist at the Leibniz Centre for Tropical Marine Research, the Jacobs University Bremen, Germany and the Niels Bohr Institute in Denmark, is investigating this question in his INTERACTION project. ‘Many types of clouds show features of organisation, but thunderstorm clouds (in the tropics) show self-organisation,’ he said. INTERACTION looks at how thunderstorms cluster, using simulation as well as developing basic models for their behaviour.

‘For 50 years, people have been making climate projections, but all of them have had a false representation of clouds.’

Clouds can organise for many reasons, such as when they are above an urban area which tends to be hotter than the countryside because of all the concrete and asphalt. Self-organisation occurs when clouds form and cluster even though the conditions below and the sunlight above them are uniform.

Thunderstorm clouds, known as cumulonimbus (which comes from the Latin cumulus ‘heaped’ and nimbus ‘rainstorm’), are tall vertical clouds that often bring rain. These clouds are the dominant type of cloud in the tropics and are also key to understanding the global radiative balance.  ‘They are at the latitude where most of the heat comes to Earth, and the sun’s radiation is much stronger there,’ said Dr Härter. These tower-like clouds affect how much sunlight enters the atmosphere, which has direct implications for warming.

‘The question is how much do these tall clouds change in clustering when, for example, temperature changes,’ he said. However, like most issues involving clouds, this is a difficult question to answer.

INTERACTION is approaching the matter from two different perspectives: one is to run simulations, which require a large amount of computing time, and another is to develop ‘toy’ models that explain fundamental thunderstorm-cloud interactions.

‘Toy’ models are very basic simulations that speak to the fundamental interactions between thunderstorm clouds. For example, Dr Härter and his colleagues are trying to understand how these clouds ‘speak’ to each other and self-organise by breaking down these complex physical interactions into their basic components.

When there is a thunderstorm, most of the rain falls to the ground but some of it evaporates in the air under the cloud. This air, having incorporated the chilly moisture, becomes a ‘cold pool’, Härter explains. ‘This evaporation is crucial in communicating signals from one cloud to another.’

If there are hundreds and thousands of clouds in a large area, the cold pools underneath them bump into each other, pushing air up into the colder parts of the atmosphere and seeding new thunderstorm clouds.

One of their ‘toy’ models portrays how these cold pools interact and this cycle – of cold pools colliding and generating new clouds – can last for generations (one lasts about six hours) of clouds, encoding the memories of past clouds and storms into the present topical cloud. The cold pools can continue to influence cloud generation for weeks.

These very basic models are necessary, says Dr Härter, in order to remove some of the unknowns for simulating cloud behaviour, such as how these cold pools interact. The team’s simulations already incorporate parameters such as wind speed, humidity, temperature, and cloud composition, which is the different ratios of water, ice, and an icy mixture called graupel.

Echoing EUREC4A’s Dr Bony and Prof. Stevens, Dr Härter said: ‘We don’t know how clouds work, especially these thunderstorm clouds that take place at scales that are hard or impossible to resolve with the current climate models.’

To take the sheer scale of cloud and their driving forces into consideration, an accurate simulation would have to include disparate variables from the motion of atoms and the energy they dissipate (nanometres) through to the Earth’s rotation and global winds on the scale of about 10,000km. ‘The very best we can do for, say, a week of simulations is to resolve (the 100-metre scale) for an area of one kilometre by one kilometre, or so,’ he said. ‘And that is a big simulation.’

The ultimate goal of the project is to have a model for cloud organisation that captures the interactions between past and present thunderstorm clouds, and feed this information into the next generation of climate models. The next step is to begin a field work and feed new measurements into their models.

‘We need to have a clearer understanding of the different cloud-system feedbacks to make a strong statement on climate change here,’ Dr Härter said. ‘The models have different ways of representing tall clouds and low clouds, and that is something that cannot be resolved without closer observational data.’

And in order to prepare for a warming climate, and predict how the world’s insulating cloud layer will change, first we need to understand how it operates now.