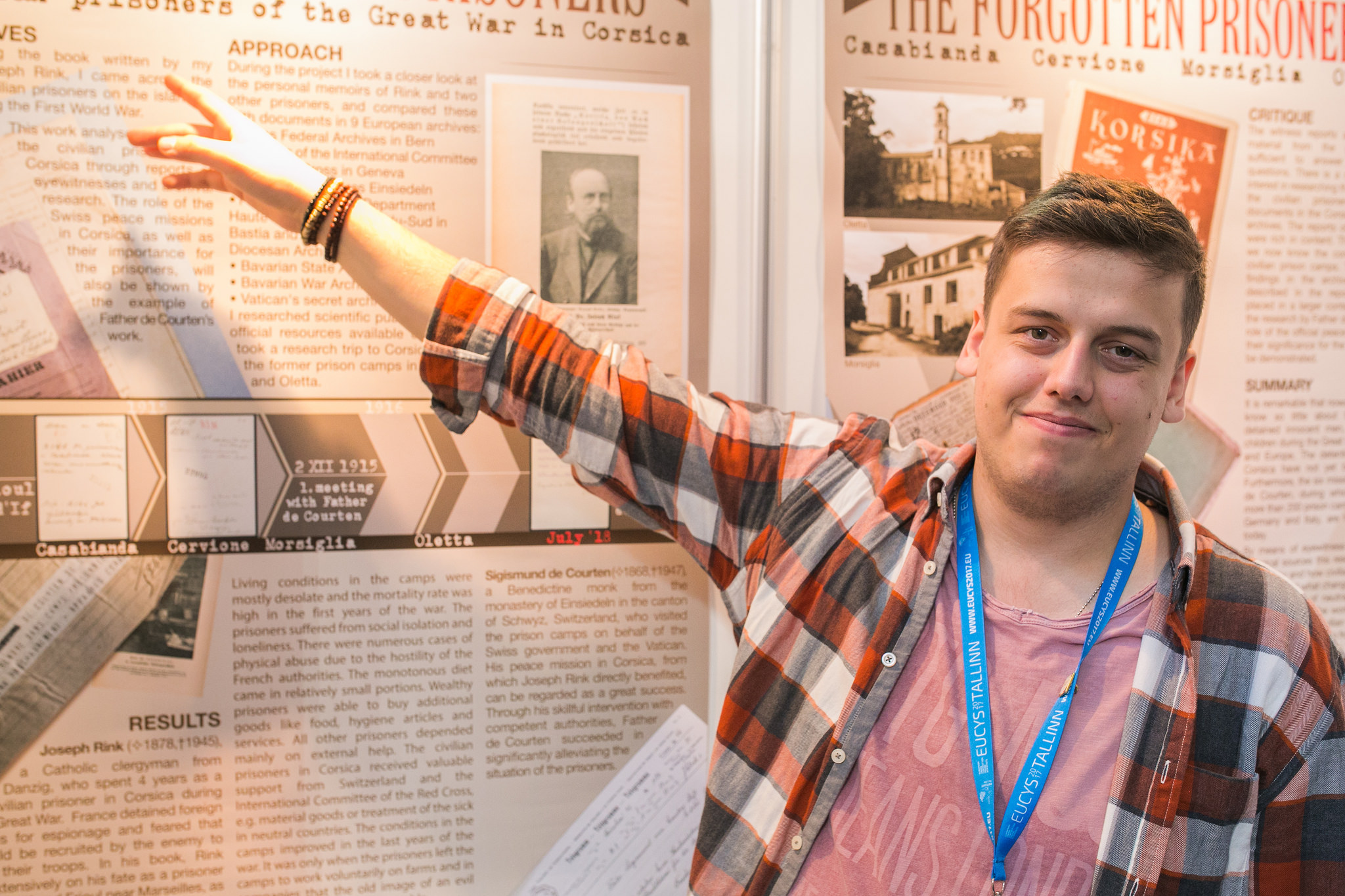 Adam Jan Alexander Ohnesorge discovered his ancestor had been a prisoner of war, which ignited his research. Image credit – European Union, EUCYS 2017

An unlikely connection to a book about First World War prisoners provided the inspiration for a study that won its 20-year-old author top prize in the 2017 European Union Contest for Young Scientists (EUCYS).

Adam Jan Alexander Ohnesorge, from Switzerland, won one of three first prizes of EUR 7 000 at the contest, which took place on 26 September in Tallinn, Estonia, for a project exploring the fate of thousands of civilians detained in Corsica, France, between 1914 and 1918.

Ohnesorge was motivated to undertake the project after reading an autobiographical book by a Corsican prisoner of war. ‘I found out that the author of that book was my ancestor, so that was the draw because it became personal for me,’ he said.

One of the most striking aspects of the project was how difficult it was for Ohnesorge to find any information about the prisoners or camps.

‘When I tried to research the prisoners, I was not able to find anything,’ he said. ‘I was doing a lot of research in the archives in Switzerland, Germany and France.

‘I had to read through thousands and thousands of pages to maybe find one page that was about this. So, one of the most fascinating things was how little archival resources still remain on this topic.’

Ohnesorge found the difficulty of gathering information – which he undertook entirely himself – to be the most surprising aspect of his project. He discovered that a Swiss monk had been sent on an official mission to help civilians in the war camps of Corsica, so Ohnesorge began his research at a monastery and in the federal archives of Switzerland. From here, he contacted numerous archives around Europe, asking to be allowed in to do his research.

Ohnesorge went on to the Bavarian state and war archives before spending a month in Corsica, where he visited all the island's archives in the hope of finding any information relevant to his project.

‘One of the most fascinating things was how little archival resources still remain on this topic.’

He says it’s important to undertake research like this because there’s a lot of conflict around the world and it would help people find the best way to improve what is being done in war zones.

‘For me, it’s important that the work got recognised,’ he said. ‘Giving the prize to the project recognises the history and the project itself, so it also strengthens the ideas I had.’

Right now, he is focused on his university studies and is unsure whether he will pursue the project further to increase its size, or whether he will go on to publish the results he already has, following on from the advice of the jury who encouraged him to make the findings widely available.

First prizes were also awarded to 18-year-old Karina Movsesjan from Czech Republic for her project on the role of protein mutations in the production of cancerous tumours, and 14-year-old Danish Mahmood from Canada for his cost-effective vital sign monitoring device that can be attached to a patient’s finger during mass casualty incidents for real-time updates.

Carlos Moedas, the EU’s Commissioner for Research, Science and Innovation, said: ‘It's encouraging to see so many bright young minds and so much talent.

‘Europe's economic wellbeing and capacity to deal with major challenges will depend on this next generation of researchers and innovators.’

This year’s contest, which took place between 22 and 27 September, was the 29th edition of the awards, which were set up in 1989 with the aim of encouraging young people to get involved in science and eventually embark on a career in research.

In total, 50 awards were given from a share of the EUR 53 500 prize money, alongside a number of honorary awards, including a trip to the 2017 Nobel Prize ceremonies.

The European Union Contest for Young Scientists was set up by the European Commission in 1989 to encourage cooperation and exchange between young scientists and to give them an opportunity to be guided by some of Europe's most prominent researchers.

In total, 25 cities across Europe have hosted the event, with 3 015 contestants winning 805 prizes since it began. Participants must be between 14 and 20 and the standard is high, as all participants are required to have previously won a young scientist competition at a national level.

During the event, each team presents their project at an exhibition stand and is interviewed by at least five jury members who will assess the project’s originality and creativity, the skill and thoroughness in how the project was carried out, and the reasoning and clarity in the results.