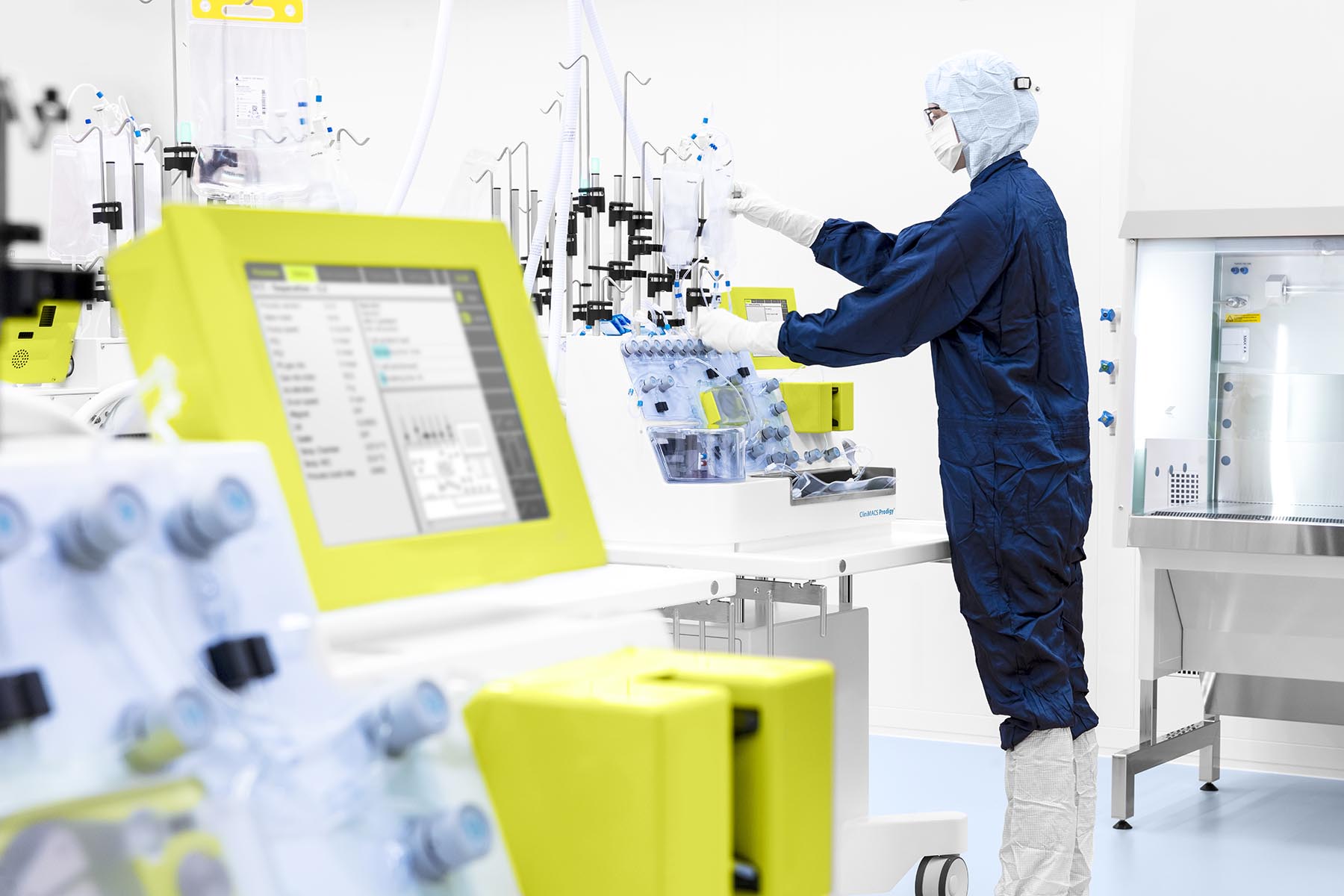 The techniques could potentially help to turn the tide on chronic diseases and certain forms of cancer by providing much-needed upscaling for regenerative medicine.

‘You insert the blood here, press the button, follow the steps and twelve days later, you get your genetically engineered cells,’ explained Dr Andrew Kaiser at Miltenyi Biotec, a biotechnology company based near Cologne, Germany. The firm has built an automated device that can produce cells for use in therapies to fight conditions like leukaemia.

The compact machine, called CliniMACS Prodigy, is one of many new medical technologies that are helping to drive advances in cell therapy. For centuries, diseases have been treated with drugs that contain relatively simple molecules. But now cell therapy is offering new ways of treating patients by deploying living cells inside the body to fight conditions that traditional drugs cannot.

A human trial in 2013 showed that genetically-modified blood cells can successfully treat a highly aggressive form of leukaemia in children and adults.

‘The initial results of cell therapies are extremely encouraging,’ said Dr Kaiser. ‘The problem is manufacturing them.’

Tailoring cell treatments to individual patients typically requires manual steps in state-of-the-art laboratories to isolate cells and tweak how they behave. This makes such procedures difficult for non-specialised clinics to use, while failure rates and costs remain high when compared to conventional drugs rolling off sterilised production lines.

‘This restricts the number of patients that we can currently treat with cell therapy,’ said Dr Kaiser. ‘There is an urgent need for simpler and safer solutions.’

This is where a project called CARAT may help to make such treatments more widely available. Under the project, Miltenyi Biotec has been able to fine-tune the CliniMACS Prodigy – the first machine to automate therapeutic cell production from start to finish.

The device is designed so that general medical staff can operate it. The cells are produced in an entirely closed system, meaning they can meet the stringent standards needed to ensure the resulting treatments are sterile and safe to use.

The system has already met regulatory approval in Europe and the USA and is being adopted in clinics in the USA, UK, Spain, Italy and Russia, and will soon be rolled out across China, Australia and Japan.

Miltenyi Biotec insists, however, that it does not develop treatments itself. Instead, the firm provides equipment and sells the substances used in reactions to enable academic centres and industrial clients to develop and manufacture cell therapies.

Dr Kaiser said that while the technology marks a paradigm shift in the ability to make cell therapy treatments more widely available, there is still room for improvement.

By the end of next year, other partners in CARAT intend to roll out more economical alternatives for releasing genes into human cells. These will use tiny circles of DNA that can integrate specific genes into the genetic material of the cells.

They are also testing more potent recipes for enhancing the capabilities of genetically engineered cells, as well as introducing a built-in shut-off mechanism to deactivate the cells once their mission is complete. For example, if T-cells in the patient’s immune system can be genetically armed to recognise and interact with the proteins expressed by cancerous cells, a treatment could become more effective.

Currently, the CliniMACS Prodigy is designed to produce cells for treating individual patients. Producing generic treatments that would work for wider groups of patients everywhere will be more challenging due to the need to scale up production. The cells need to be specifically tuned to the immune system of each patient, so ways of avoiding adverse reactions will also need to be found.

One approach to sidestep this risk of immune reactions is to harvest cells from placentas collected after childbirth. Studies by Israeli biotech firm Pluristem Therapeutics have shown that these cells provoke comparatively little immune response and can help to heal damaged tissue.

Recent estimates suggest that 1% of Europeans aged between 60 and 90 suffer from a condition called critical limb ischemia, which is where an obstruction in the arteries prevents blood from reaching the extremities. Severe cases can lead to hand, foot and partial leg or arm amputations. Most patients with the condition die within a decade of diagnosis.

According to Pluristem Therapeutics, injecting placenta-derived cells into the muscles of these patients can trigger the release of beneficial molecules, such as cytokines, chemokines and growth factors, which kick-start the healing process of blood vessels, muscles and reduce harmful inflammation.

‘One placenta is suitable for more than 10,000 treatments.’

But rather than engineer the cells in a test tube, Pluristem Therapeutics harvests them in their natural form from placentas donated by mothers after birth. Placental cells have evolved over millions of years to protect human tissue and their therapeutic qualities are still being discovered.

As part of the PACE project, Charité is helping Pluristem to identify why this treatment cures some patients better than others. Researchers are using novel techniques, including mass cytometry – where antibodies carrying heavy metal tags are used to label cellular proteins – to chart out each protein active in the placental cells and study how they interact with damaged organs.

‘What makes the study unique is that the cells are produced entirely outside patient bodies in a bioreactor,’ said Prof. Volk, who coordinates PACE. ‘One placenta is suitable for more than 10,000 treatments.’

Over the coming years, clinical centres across Europe and the USA will make a dozen injections of placental cells into the muscles of over 200 patients as part of the final phase of the treatment’s human trials.

Positive results would mark a new chapter for cell therapies, which have so far been mainly used for treating leukaemia. If they were to be approved for fighting critical limb ischemia, it would demonstrate that living cells offer new prospects for tackling many currently incurable diseases. The results of the trial are expected in 2021.

‘When you speak of therapies, people still think of small molecules,’ said Dr Frauke Stähler, a research coordinator at Charité and the project manager of PACE.  ‘We still have to inform the public of the opportunities offered by cell therapy.’

The shift in mindset towards living drugs tailored to each patient is particularly challenging for pharmaceutical companies experienced in producing vast amounts of identical molecules. But living cells offer ‘exciting new medical opportunities’, said Dr Stähler, and technologies like placental harvesting and the CliniMACS Prodigy offer some of the first business solutions for bringing them to market.

Q&A: Talking about the ‘race’ for a coronavirus vaccine could reduce public confidence

Efforts to achieve herd immunity against Covid-19 with a vaccine could be hampered by low levels of confidence in immunisation programs in some European countries, warns Professor Heidi Larson, director of the Vaccine Confidence Project and an anthropologist at the London School of Hygiene & Tropical Medicine, in the UK.