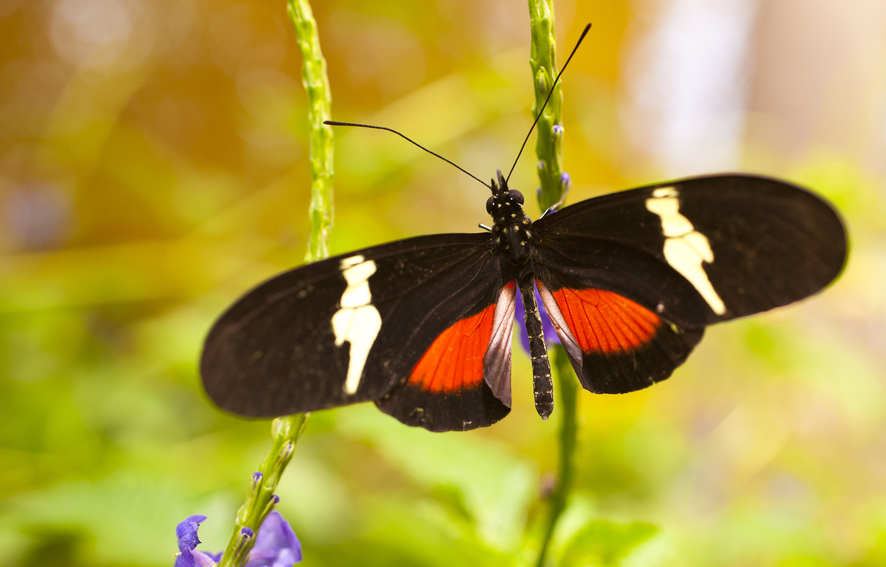 Scientists are studying butterflies in the Heliconius genus to understand how genomes can change over time. Image credit: Shutterstock/ bluecrayola

Darwin’s theory of evolution is more than 150 years old, but we still understand very little about how new species arise. Now, genetic sequencing of butterflies is helping scientists unravel the mechanics behind the spectacular biodiversity of the natural world.

There are around 17 500 species of butterfly in the world and one species is usually considered distinct from another if it does not interbreed to produce fertile offspring. Understanding more about how new species arise could help explain, for example, what defines humans, as distinct from chimpanzees.

Around 10 000 species go extinct each year - 0.01 % of the 100 million different species that inhabit the earth - according to estimates by the the World Wildlife Fund and that rate is likely to increase as the climate heats up.

In order to conserve habitats and preserve biodiversity, it is vital that researchers understand what are the factors that enable new species to form.

It's also critical for the environment because biodiversity loss is likely to accelerate climate change as, for example, plants stop removing carbon from the atmosphere and preventing soil erosion with their roots.

It could also help understand how factors such as climate change will affect the diversity of species on earth.

‘Butterflies are an increasingly useful model system because they are arguably the most intensively studied invertebrate group in the world,’ said Dr Vlad Dinca, currently based at the University of Guelph, in Canada, who is leading a project using DNA to map butterfly diversity across Europe.

His EU-funded EUGENMAP project is using thousands of DNA barcodes of most European butterfly species – roughly 470 in all – to map biodiversity patterns. That involves sequencing a short, standardised, genetic marker that can be used to identify specimens regardless of life stage.

The DNA barcode reference library under preparation will be one of the most complete in the world for a given taxonomic group. It will also allow detection of unusual genetic patterns that can highlight interesting evolutionary processes that require further study.

One of the aims is to compare European research to findings in North America and Australia.

‘That will allow us to take a look at things on a really large scale – something that has not been done yet for such animals,’ Dr Dinca said. ‘This will lead to a much better understanding of various aspects of butterfly diversity and of biodiversity in general.

'This, for example, can greatly contribute to efforts at conservation, especially given the looming global extinction crisis.’

In order to gain insight into speciation – the process by which new species arise – scientists are studying particular groups of butterflies.

For example, researchers on EMARES, supported by the EU's European Research Council (ERC), are using genetic techniques and empirical studies to investigate a type of butterfly known as mycalesine - or Bushbrown - which have yielded 250 living species in Africa, Asia and Australia.

By comparing traits such as wing patterns and male pheromones, they hope to unravel the effect of the environment on speciation.

Crucial to this is unpicking the processes that give rise to adaptive radiations, where organisms rapidly diversify into new forms as a result of changes in the environment.

According to project leader Professor Paul Brakefield, at the University of Cambridge, UK, research shows that a number of new Bushbrown species emerged some 15 million years ago – about the same time as forests in the Old World tropics were changing into a more savannah-like grassland environment.

‘The butterfly radiations expanded into these new, more grassland-dominated environments and they showed a classic adaptive radiation in terms of expansion into unexploited ecological niches,’ he said. At the same time, new species developed through reproductive isolation.

‘By working with different traits in these parallel radiations, we hope to unravel the way in which ecological speciation is driving these radiations,’ Prof. Brakefield said.

In order to understand exactly what makes one species different from another, a separate group of researchers is studying genomic data from butterflies in the genus Heliconius.

‘Heliconius can easily be raised in the lab and we have whole genome sequences for the ones we study, so that is a great resource for evolutionary studies on the genome scale,’ said Professor Chris Jiggins, also at the University of Cambridge, who is principal investigator of the ERC-backed SPECIATIONGENETICS project.

One reason that we might now be able to crack the secrets behind speciation is that advances in technology, such as genetic sequencing and substantial computing power, are helping the researchers to model the processes involved in speciation, using detailed information about species obtained in the laboratory over decades.

The SPECIATIONGENETICS researchers aim to analyse and explain the patterns of how genomes change over time. Gene sequencing will be complemented by field studies in South and Central America, where project participants are raising caterpillars in outdoor cages in Panama to deepen understanding of the butterflies’ traits.

‘When we see gene sequences that are strongly different between species, we want to understand if those regions are responsible for making the species distinct,’ Prof. Jiggins said.

The project, which began in 2014, builds on a rich history of research dating back to the butterfly nets of Darwin’s contemporaries Bates and Wallace, who scoured the jungles of South America for specimens, including butterflies such as Heliconius.

‘They would obviously have been amazed by how we can study these processes, looking in such detail at the genome,’ Prof. Jiggins said. ‘But, in some ways, we are still working to answer the same big questions they were asking 150 years ago.’