Bristle worms could help us find the lunar clock inside us all – Prof. Kristin Teßmar-Raible 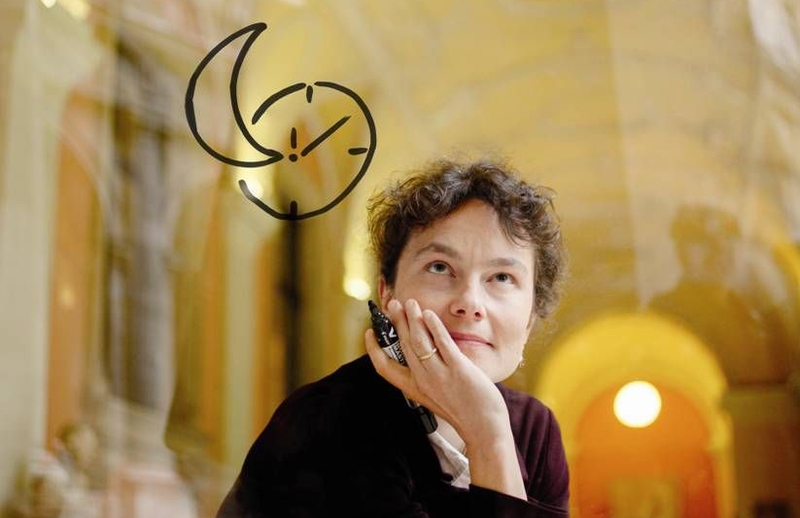 Sleeping, eating and even going to the bathroom, our bodies are clearly affected by the time of day. But the cycle of the moon could also have impacts on our biological functions, according to Professor Kristin Teßmar-Raible, at the Max F. Perutz Laboratories, University of Vienna, Austria, who is leading LUNAR.CLOCK, a project funded by the EU's European Research Council exploring how the moon affects marine organisms.

What exactly is the lunar clock?

‘Everything that has a monthly period length that oscillates (causes a repetitive degree of change) by definition is a lunar clock. These cycles typically impact the reproduction of organisms. This is mainly about getting the gonads (organs that produce eggs and sperm) ready in many species and it also impacts the behaviour of species during mating. This can be quite dramatic, if you look at the red crabs of Christmas Island (off the coast of Indonesia), they normally live isolated in the forest. When it is their mating time, which is regulated by a seasonal and lunar cycle, they all come together and march down to the sea.’

Do the different phases of the moon affect the lunar clock?

‘For marine organisms the full moon often serves as a signal (and) many organisms sync to it. There are several explanations for the widespread occurence of lunar-controlled rhythms in the marine environment. One that might be quite plausible is that many of these species are external fertilisers, which expel their eggs and sperm into the open water. In order for eggs and sperm to meet - and hence successful reproduction to occur - they have to be ready and released together.

‘Another puzzle is how the organisms can sense very dim moonlight to synchronise their lunar clocks but also sense sunlight to set their daily clock. Sunlight is about (a hundred thousand to a million times) brighter than moonlight. We want to know more about these different photoreceptors and why the sunlight doesn’t bleach the sensors for the moonlight.’

What can we learn from this?

‘Knowing that the lunar cycle has such a prominence in reproduction of marine organisms means they can be controlled by very dim nocturnal light. It is important to know what light this would be and what disturbs them. We can also think about light pollution because this could impact on mass spawning events which are very important for species to regenerate. If they don’t happen it can severely impact the ecosystem. The second factor one might want to consider is how these monthly cycles impact on food chains in the marine environment.’

Does the lunar clock affect us?

‘Marine organisms all sync to the full moon to set their clocks for reproduction or other specific behaviour. For humans, and land animals in general, it’s not clear what role the moon plays, if any.

‘Obviously, the menstrual cycle of the human female fits with the definition of a lunar clock. It is speculation, but it may be that our monthly clock has uncoupled from the moon because it was no longer the best stimulus for synchronisation. Or it uses other synchronisation cues from the moon that we do not know yet. Human females appear to synchronise with each other, presumably due to pheremones (chemicals released by the body). Maybe the moon was a factor once, but females could have changed the synchronising factor to something that is more useful in their environments, we don’t know yet.

‘For marine organisms the full moon serves as the signal for reproduction, they all sync to it and reset their clocks.’

‘On the other hand there has been an interesting study recently, albeit with a low number of candidates, that men have monthly or semi-monthly fluctuations in hormones. This will have to be looked at in a much larger scale, but it shows there could be something there.

‘Two other interesting studies suggest that there is a connection with sleep depth and the lunar cycle. But then there is one that argues against it. I think we simply need more studies and more data.’

Can studying bristle worms reveal if there actually is a lunar clock inside us?

‘The worms and midges we study are in a sea-water culture and we mimic the lunar light by a bulb that is switched on and off. Depending on the question we are asking, we can use different intensities and wavelengths of light. We can also specifically disrupt the function of light receptors and find out if (that) has a specific effect on the worm's rhythmicity. We also investigate how their general behaviour and physiology has been altered if a specific gene or cell type is missing. If we understand the clock better for the worms on molecular and cellular terms, we can then explore what is, or isn’t, conserved in humans and what are, or are not, the effects on humans.’