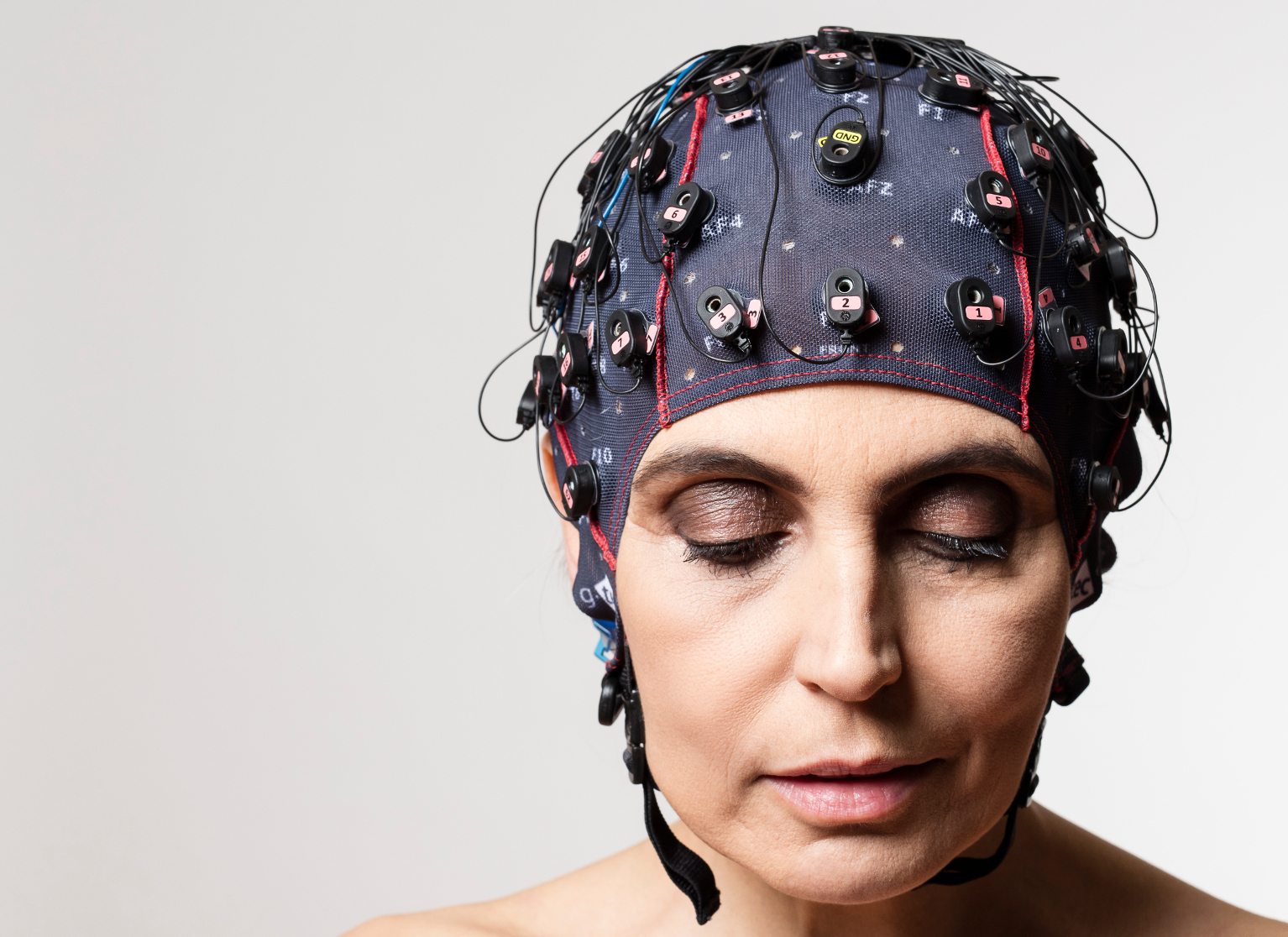 Electrodes inside a soft cap, which has been tested on healthy volunteers, measure brain activity to tell if a patient is conscious and, if so, to let them communicate. Image credit: g.tec Guger Technologies OG ©Florian Voggeneder

Imagine being able to hear, feel and think – but not see or move. Around you, you can hear doctors and family members saying that you cannot understand or make decisions.

This nightmare scenario is a reality for tens of thousands of people worldwide who have been diagnosed as being in a coma but can, in reality, understand what is going on around them.

A new, experimental technology has enabled a woman in Sicily, Italy, living with locked-in syndrome to successfully communicate with her family after years of silence.

‘The family was unsure if she was still there,’ said Dr Christoph Guger, the founder of the Austrian company behind the device, known as mindBeagle. ‘They had seen no sign of consciousness for so long.’

The technology, developed under the EU-funded ComaWare project, is shaped into a soft cap and is packed with electroencephalogram (EEG) electrodes that measure brain activity.

As scientists learn more about comas, it has become clear that there are various states of consciousness along the spectrum from being in a coma to having normal brain function.

‘Coma patients can be subdivided into several types,’ said Dr Guger. ‘People who are genuinely in a coma have no cognitive function and no motor responses – they cannot think and they cannot move. But some people may appear to be in a coma even though they are in fact conscious to some degree.’

‘Some people may appear to be in a coma even though they are in fact conscious to some degree.’

Differentiating patients who are in a coma from those in a minimally conscious state is a major challenge. To the naked eye, they all appear unresponsive. ‘The lack of feedback from the patient makes it exceedingly difficult to judge,’ said Dr Guger.

The standard tests to assess patients who appear to be unconscious are not always accurate, he adds. People who show no motor function are usually assessed once early in their illness, and that diagnosis informs their treatment for months or years to come.

Researchers now know that in patients who appear unconscious but are in fact aware, states of alertness may fluctuate during the day. This means that someone could be misdiagnosed as being in a coma even though for much of the day their brain is active.

Dr Guger explained: ‘mindBeagle first figures out whether the patient has any cognitive function and can understand what is going on around them. If they still have cognitive function we can communicate with people affected by locked-in syndrome by asking yes/no questions and gauging their response by monitoring brain activity.’

The system has a number of features. A simple auditory test assesses the patient’s capacity for hearing and understanding. By playing high- and low-pitched tones, instructing the patient to count only the high tones and then measuring brain waves, doctors can learn whether their apparently comatose patient is in fact tuned into their environment.

The system also uses tactile stimulation to check awareness and ask patients to answer questions. By stimulating the left or right hand, for example, patients can be asked to focus on the side of their body that is vibrating. By measuring brain activity, scientists can tell whether the subject is successfully responding to vibrations.

‘This is also the communication mode,’ says Dr Guger. ‘We can ask them to imagine moving their left or right hand. We then observe changes in the sensory motor cortex (which controls movement).’

If a patient is asked a question and told that moving their left hand means ‘yes’, while moving the right hand means ‘no’, they are able to respond by thinking about moving the appropriate hand. Although they may not actually move a muscle, the mindBeagle wearable EEG device effectively reads their thoughts.

The device is also being used in a Harvard-linked hospital in the US to assess unconscious patients admitted to the emergency department, and a university in Oregon is testing the system for use in locked-in patients.

Meanwhile a hospital in Liege, Belgium, uses mindBeagle to differentiate between various stages of consciousness, helping doctors to separate patients with locked-in syndrome from those in a permanent vegetative state.

In future, the approach could be used to help paralysed people to communicate and in the rehabilitation of stroke victims.

Wearable EEG systems also promise to revolutionise epilepsy care. Around 65 million people worldwide live with epilepsy, which is usually diagnosed by a specialist reading an EEG scan which lasts around 20 minutes.

Patients are often prescribed medication and asked to keep a diary which can later be reviewed with their doctor. ‘If the first drug is not working, they change it and repeat the process, which takes a lot of time,’ said Professor Esther Rodriguez-Villegas of Imperial College London, UK.

However, she believes this short assessment does not always collect enough information about the patient’s brain. If a longer EEG could be offered more frequently it could provide doctors with more information, making it easier to manage epilepsy with medication.

She said: ‘20 minutes is not always enough time to figure out what is going on. However, EEG requires access to specialist equipment and staff so it’s a catch-22 because time and resources are limited.’

The solution is to develop a simple, lightweight version of EEG that patients can wear for longer periods, allowing doctors to collect the most pertinent data on their brain in various states – including during epileptic seizures.

Through the WEEG project, funded by the EU's European Research Council (ERC), Prof. Rodriguez-Villegas has developed a device that balances the desire for a wearable solution with the need for sufficient battery life to last several hours.

‘The whole idea is to make something that’s small enough to be worn under a hat – or even integrated into a hat – and is light enough to wear while walking around during the day,’ she explained. ‘The reason existing EEG machines are so big is that they are heavy on power consumption so that was the challenge we needed to overcome.’

The solution lay in microchips with integrated circuits that consume less power than a single neuron in the brain. This means a very small, long-life battery is enough to power the system without adding weight.

The device uses novel algorithms and collects data which can be viewed in real time, but Prof. Rodriguez-Villegas believes a health professional will still be required to interpret the information. ‘Fully automated diagnosis would be a big challenge, so doctors are still part of the picture for diagnosing epilepsy.’

The next step for the wearable EEG is to explore its potential in monitoring the brainwaves of people with sleep disorders. Prof. Rodriguez-Villegas has won a new ERC grant to develop a consumer product which could be worn overnight. If her proof-of-concept research is successful, it could deliver a nightcap that serves data for breakfast.