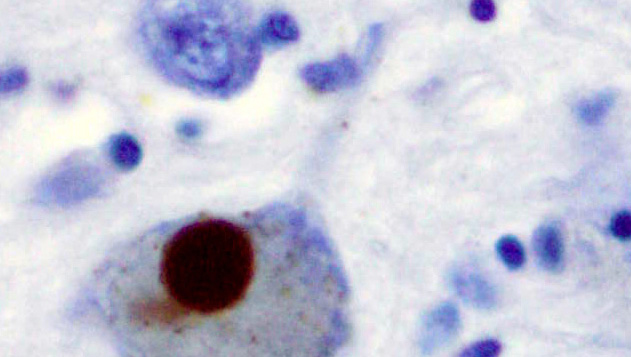 Parkinson’s disease affects more than 4.6 million people around the world and there is currently no cure. Image credit: ‘Lewy Body alphaSynuclein’ by Marvin 101 is licenced under CC BY-SA 3.0

Parkinson’s disease affects more than 4.6 million people worldwide and this number is set to double by 2030 as the population ages. While the symptoms of this movement disorder can be alleviated, there is currently no way to stop it from progressing.

The disease develops in part because cells that produce dopamine, an essential brain chemical, are lost. One of the most effective treatments for Parkinson’s is levodopa which increases dopamine levels. However, the effectiveness of this therapy wears off over time and it can have side effects.

Researchers investigating better ways to treat Parkinson’s have implanted dopamine-producing cells into patients’ brains. Small studies conducted since the 1980s have shown promise: some patients do very well, but others have suffered from side effects without clinical benefits.

‘Cell transplantation has been shown to work for some patients and we wanted to further optimise the protocols,’ said Natalie Valle Guzman at the Cambridge University Brain Repair Centre, in the UK.

‘The previous trials found that the patients who do best are those who have been diagnosed for less than 10 years, have responded well to levodopa drug treatments but have not yet developed major complications from it, and are under the age of 65.’

Researchers at several European centres have been working to fine-tune their patient selection criteria and perfect how cells are prepared for grafting. Since May 2015, through the EU-funded TransEuro project led by Professor Roger Barker at Cambridge University, doctors in the UK and Sweden have performed 17 grafts on Parkinson’s patients and 10 more surgeries are planned.

Each patient undergoes two procedures, one for each side of the brain. In some cases, it is not feasible to graft both sides in a single procedure due to the limited supply of the specialised cells required.

Results of the trial are expected from 2020 onwards, after all patients enrolled in the study reach the three-year endpoint at which doctors can assess the safety and effectiveness of the graft.

Guzman said it could be 10 years before this treatment would potentially reach clinics. By then, progress on developing flexible stem cells from adult cells could solve the problem researchers face in securing specialised brain cells.

‘By the time someone is diagnosed, about 50 % of their dopamine-producing brain cells have already died.’

The current trial could pave the way for the first in-human transplant trial replacing brain cells with stem cells.

‘Our hope is that the current trial will demonstrate proof of concept,’ said Guzman. ‘We would then move to using stem-cell-derived dopamine neurons.’

It’s such a big job because so much damage has already been done to the brain by the time a diagnosis has been made.

‘By the time someone is diagnosed, about 50 % of their dopamine-producing brain cells have already died,’ Guzman said.

The problem is that there is currently no blood test or brain scan for Parkinson’s. The only sure-fire way to confirm that someone had the disease is by analysing brain tissue after they have died. Doctors diagnose the disease based on clinical symptoms such as tremors, stiffness and problems with balance, and their response to treatment and sometimes special dopamine scans.

This approach has several downsides. Not only can the disease be confused with other similar neurological conditions, it also means that by the time there are clear signs of the disease, considerable damage may have been done to the brain.

A simple blood test that checked for detectable signs of the disease, known as biomarkers, would allow doctors to intervene much earlier, potentially limiting the damage done by the disease. Biomarkers would serve as an early warning system that flagged up a looming problem and which could be treated as early as possible.

The ideal biomarker would also be specific enough to allow doctors to track the patient’s progress after treatment begins – potentially prompting them to switch treatments if medication is not having the desired effect.

Now, a long-awaited Parkinson’s biomarker may be on the horizon. The EU-funded Biomarkers for PD project has established a new test for biomarkers in the fluid that surrounds the brain and spine of patients with the disease.

The researchers took samples of the fluid – known as cerebrospinal fluid – from people with Parkinson’s and healthy individuals. They tested this liquid for soluble alpha-synuclein, a protein associated with the disease.

‘This has the potential of becoming the first biomarker assay (test) that can reflect the underlying pathophysiology of Parkinson’s disease,’ said Dr Gunilla Osswald, chief executive BioArctic AB, the brain disease specialist company that coordinates the research project.

‘By enabling early and more specific diagnosis of the disease, patients can be given treatment earlier thereby improving quality of life, symptom-free time and the cost for society will also be lower,’ said Dr Osswald. ‘The development of the biomarker assay would also facilitate the development of effective disease-modifying treatments benefiting all patients suffering from Parkinson’s disease.’