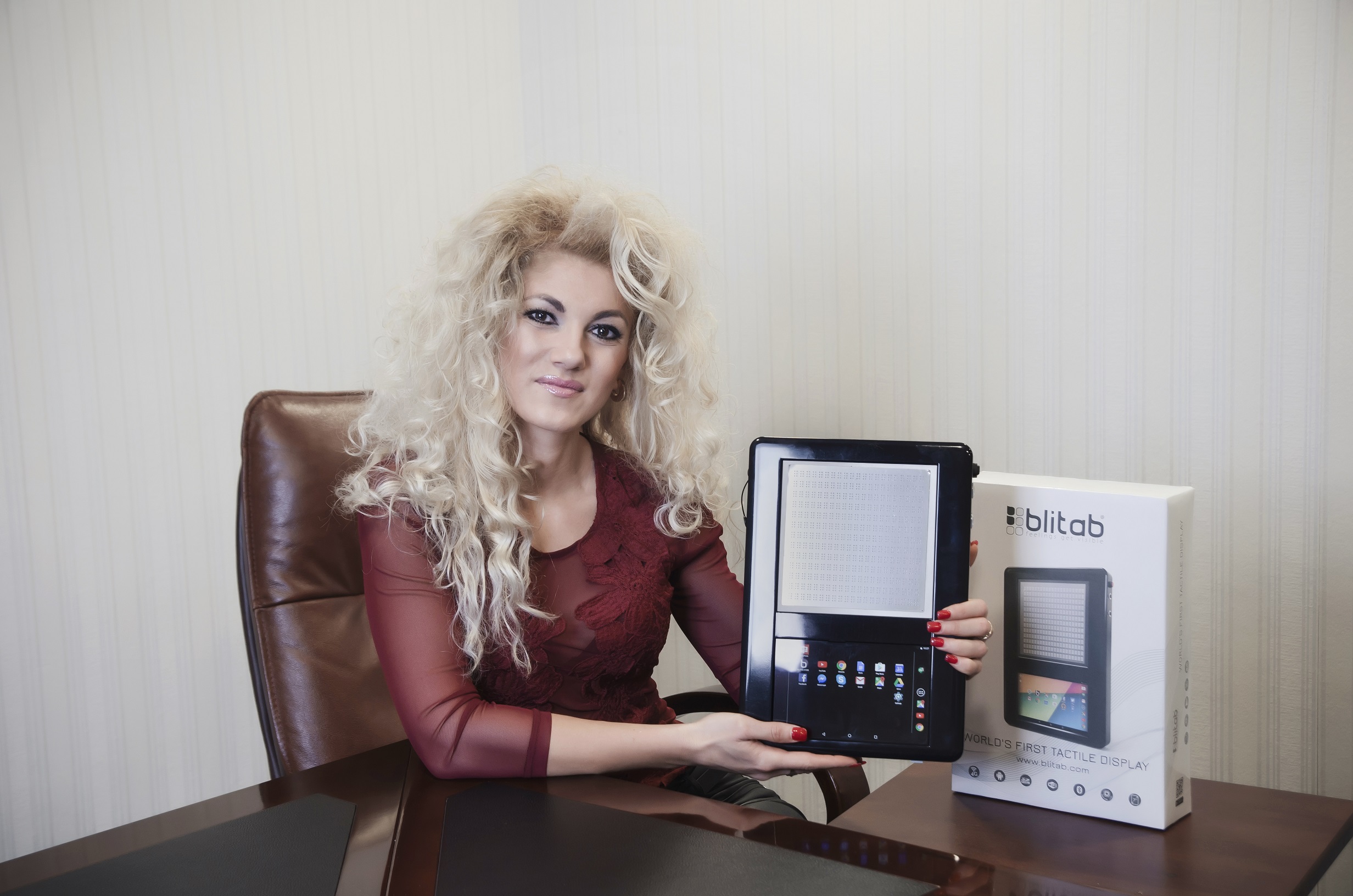 Entrepreneurship in Eastern Europe is on the rise, but more better communication about the funding available from the EU would help it to grow further, says Kristina Tsvetanova, the US-based co-founder and CEO of blind-accessible tablet start-up Blitab, and a 2017 winner of the EU Prize for Women Innovators.

Can you tell us about the issue that Blitab is trying to overcome and how it’s going about doing that?

‘Blitab is a deep tech project addressing the global social issue of blindness and media access. Worldwide there are 285 million blind or visually impaired people. There are reading devices on the market for these people, which are keyboards representing up to seven words in braille, but you have to read line by line, which takes a lot of effort, they really cost a lot, and just 1 % of all materials are translated into braille. But we’ve developed technology that instead moves small braille bubble dots out onto the surface of a tactile screen, providing the whole package — not just a page of text but also images and graphic.

'It’s now in its final stage of development and we’re refining the final concept, but in order to set up a serious production line, we have to get funding for certain components. The initial market will be developed countries in Europe and the United States, with a price less than (an) iPhone or high-end Android. That means that 80 % of those (we) polled were willing to buy it.’

The project began in your native Bulgaria — what was this experience like?

‘Everything started in 2012 when I met a blind colleague at university and I recognised that, in Bulgaria, blind people cannot afford reading devices. I started brainstorming and met my co-founder, but I realised that back then in Bulgaria, no-one believed two young engineers could solve such a global issue. There was no clean lab where we could develop our technology, and at that time, female entrepreneurs were not so popular, which meant I was not proud to say I was the project CEO. We decided to move it to the heart of Europe, to Austria, as I had studied at a German-speaking school and we also saw that there was the potential to get support as a company in the area of social entrepreneurship.’

‘I think it’s very important to focus on improving the communication around European funding.’

Bulgaria sits at the bottom of the European Union’s Innovation Scoreboard, which ranks countries according to their innovation performance. What are the main challenges faced by entrepreneurs there nowadays?

‘The start-up scene in Bulgaria (in 2012) was not as developed as it is now — I have heard that there is huge change in supporting progress and great developments in AI and deep tech. But you cannot change a culture in a day — there is still some work to do.’

What do you think is the secret behind the success that you have had with Blitab?

‘The key success factor here is to be persistent. Not just in the technical aspects of the development process, but also when you have any difficulties in the team, or with policy, and then to try to find answers in the community around you. You also have to be adaptive – for example, it’s different being an entrepreneur in Europe, in America, and in China. In the US, even before you prototype, you need 10 marketing experts, while in China, the process moves very fast, and you have to explain your concept deeply.’

As a founder, what do you think of the EU’s European Innovation Council (EIC) pilot to support innovation scale up, which was launched last month?

‘I’m really excited about the EIC, as I have the perspective of an entrepreneur who could also take advantage of these opportunities. Until now, it was so difficult to figure out which programme was right for you, or whether you meet all of the right criteria for each particular funding instrument, so for me it’s a new user interface for the funding available for start-ups. This way, everything is more understandable in making comparisons, and it’s a great way to streamline whatever you need, including coaching and funding to expand initially.

‘The Open FET (Future and Emerging Technologies) programme encourages collaboration with universities, but I think it’s very important to distinguish what is developed by universities and by companies. Here, I think we are still years behind the US, where engineers are the creators of IP (intellectual property). There are very rare cases where spin-offs don’t have 100 % of the decision-making power. This is important when you want to go to market, and the VC (venture capitalist) asks the company if they have the whole IP.’

And what does the EU still need to do to improve innovation in regions which perform at the bottom of the innovation scoreboard?

‘We are talking about countries like Bulgaria and Romania, and I think it’s very important to focus on improving the communication around European funding. I would imagine a local council consisting of international minds who are part of the community, speaking with local start-ups and learning about what they need. Frequent communication about what grants are doing would shrink the distance between what’s happening in Brussels and Bulgaria.’