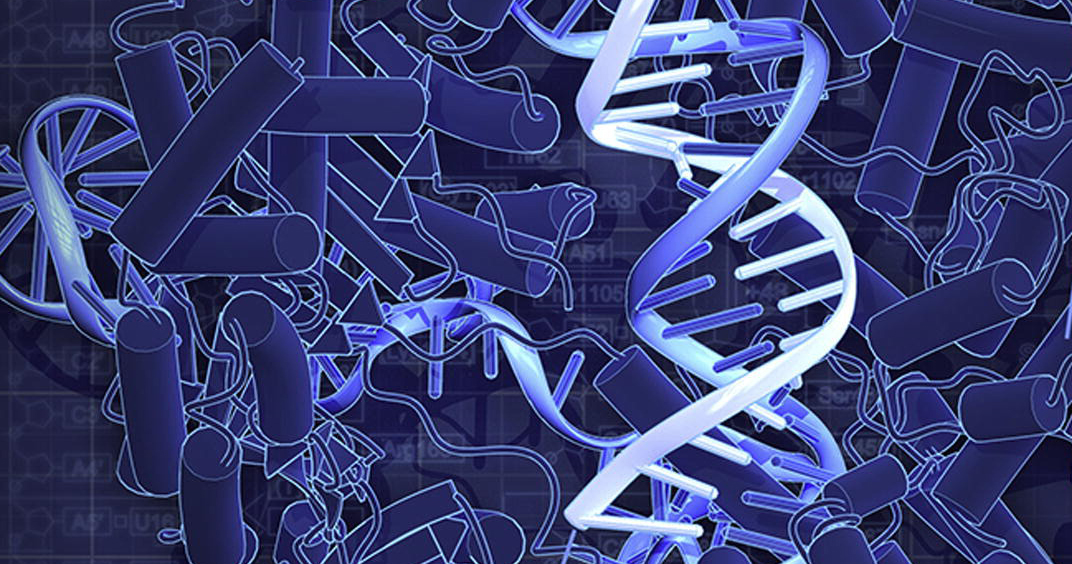 Some viruses can evade bacteria’s natural defence systems. Credit: ‘Crystal Structure of Cas9 in Complex with Guide RNA and Target DNA’ by Hiroshi Nishimasu is under CC BY-SA 3.0

Special viruses that can disable a fundamental defence system used by bacteria are opening a new front in the war against superbugs.

Penicillin and other antibiotics are among the most important medical breakthroughs of all time, saving hundreds of millions of lives.

But over the years, bacteria have evolved clever new ways to protect themselves from antibiotics, resulting in the emergence of powerful drug-resistant superbugs which kill 25 000 people every year in Europe.

While some researchers are working on new antibiotics, others are taking a different approach: using viruses known as bacteriophages that specifically target bacteria without damaging human cells.

Normally, bacteria steal part of the bacteriophage’s DNA and add it to their own, teaching them to recognise it as a threat.

It’s a technique that has inspired CRISPR-Cas technology, where researchers have learnt from bacteria how to edit genomes with unprecedented ease.

Now scientists are creating bacteriophages that can disable the CRISPR-Cas system in bacteria, removing this essential failsafe.

‘It can be a very simple and cheap process.’

‘We are looking at how we can knock out the so-called CRISPR-Cas system that provides bacteria with a natural immune response,’ said Dr Stan JJ Brouns at Delft University of Technology in the Netherlands.

Some bacteriophages have been found to have proteins that naturally inhibit CRISPR systems. If the genetic code for these proteins can be transplanted into other bacteriophages, doctors would have a potent weapon against antimicrobial-resistant bacteria.

As part of the EU-funded REMEMBER project, Dr Brouns and his team are looking for bacteriophages with the ability to evade CRISPR so that they could copy and paste chunks of their DNA into other bacteriophages to create an arsenal of phage therapies.

There are, however, a few hurdles to clear before this research makes it into hospital treatment rooms. For one thing, bacteriophages can be tricky to work with and they may struggle to secure approval from health authorities.

‘Chemicals behave in consistent and predictable ways whereas bacteriophages are always mutating,’ said Dr Brouns. ‘We may need to start thinking now about specific rules for regulating phage therapy.’

While developing new phage therapies is a labour-intensive task, one of the upsides is that producing phage therapies should be inexpensive. ‘It can be a very simple and cheap process,’ said Dr Brouns. ‘In principle you need to infect some cells with phages and the cells will make lots more phages – like small but efficient phage factories.’

The power of the CRISPR-Cas system has been neatly illustrated by scientists studying how bacteria and viruses evolve together. Evolution is often thought of as a slow process but in microbes, a new generation comes along every 20 minutes.

This means researchers can expose bacteria to bacteriophages and watch as they do battle. Dr Edze Westra at Exeter University, UK, has found that bacteria with the CRISPR-Cas system can drive a bacteriophage to extinction within a few days.

‘When exposed to a potentially lethal phage, bacteria respond strongly by favouring their CRISPR-Cas system,’ said Dr Westra, who is examing the issue as part of the EU-funded PROTECT project. ‘But if we knock out CRISPR-Cas they rely on different defence mechanisms which are less effective against phages. This has a massive influence on their ability to thrive in their environment.’