Bacteria are always at war. Understanding their use of weapons may lead to antibiotic alternatives 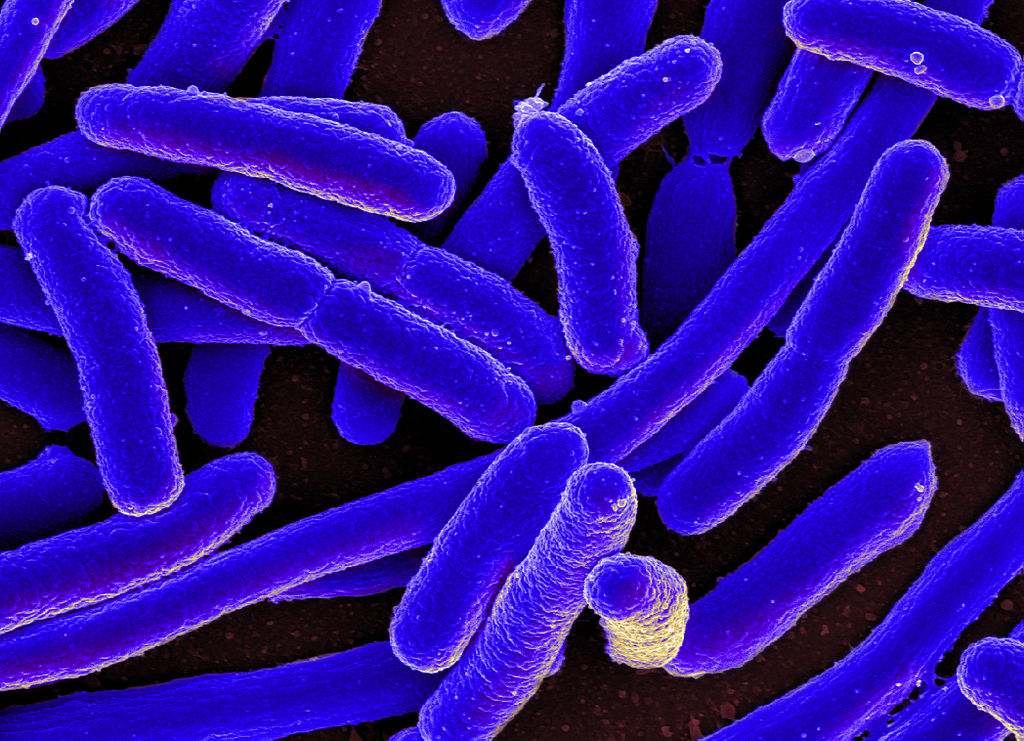 E.coli can cause disease but it also lives in our gut and has a range of toxins that helps keep the populations of the various bacteria in balance. Image credit - NIAID/Wikimedia commons, licenced under CC BY 2.0

A small glimmer of light passes from one bacterium to another. Under the microscope it might not look like much, but there’s a deadly battle underway: the second cell has just been hit by a poisoned spear.

‘You can see the cell ball up and die,’ said Professor Kevin Foster from the University of Oxford, UK.

Unlike animals, which are more likely to avoid fighting where possible, bacteria can be very aggressive.

The world of bacteria is full of conflict, he says.

Prof. Foster started his career in zoology by studying animals such as bees and wasps to understand the balance of cooperation and competition, before he turned his focus to the microbial world. He felt that there was still a lot yet to learn in microbes about how they interact as community.

‘Bacteria hadn't really been thought of in that way. Bacteria traditionally over the years have often been studied in shaking flasks or viewed as single cells. By the time I started studying bacteria (in 2005), people were recognising that bacteria actually spend a lot of their time in these very dense and diverse communities,’ he said.

‘The bacteria are quite amazing. They have the ability to detect that they are being attacked and they’ll attack back. It's fascinating that there is this whole world of conflict going on.’

Prof. Foster is leading a project called MicroWars to study how bacteria use the various weapons that they have. Faced with the threat of growing antibiotic resistance, we may be able to learn a lot from studying how bacteria have developed ways to kill each other. As well as the poisoned spear, bacteria have a range of different tactics, such as releasing chemicals – antibiotics – that kill other bacteria.

‘The classic one is antibiotics. Those are the ones that everyone probably knows about the most. They tend to be diffusible, so the bacteria produce them and then secrete them into the environment,’ said Dr Luke Allsopp, a microbiologist from Imperial College London, UK, who also researches competition between bacteria.

He is not involved in MicroWars but studies the bacterial type VI secretion system which is responsible for launching a single poisoned spear at other bacteria.

‘I think these (weapons) systems have been around for a long time. We're only just starting to understand them,’ he said, adding that although we can see these weapon systems are present in many bacteria, we still do not know how and when they are being used. ‘Understanding this, I think, is a big question. Then, if we could use this for our benefit, that would be fantastic.’

To better understand how bacteria use weapons, Prof. Foster and his team bring together expertise from computer science, microbiology and bioinformatics.

‘It's very simple to say that one has a toxin and the other doesn't have a toxin, so the one with the toxin will win. That’s not the case. Making these toxins can often be very costly (resource-intensive) and if you're not very effective in using it, then you can be outcompeted by a strain that doesn’t have it,’ said Prof. Foster.

His team has developed computational models to simulate bacteria growing and interacting, before they begin with more labourious experiments. ‘(Computationally) we can study all kinds of conditions, where the weapons can be beneficial or not,’ he said.

The researchers have turned their simulations into a computer game called Gut Wars, where players can pit bacteria with different strengths against each other and learn about real-world examples.

To put the simulations to the test, the team then study genetically-engineered bacteria with fluorescent markers to track their use of their weapons systems. They are focussing on two types of bacteria, E. coli and Pseudomonas aeruginosa, as test cases.

E.coli might be familiar as an infection from contaminated food or water, but it also lives in our gut. It has a range of toxins that helps keep the populations of the various bacteria in balance, and some strains have even been used as probiotics to treat infections. It’s also very well-studied, which makes it easier to manipulate in the lab to test it under different conditions.

Pseudomonas can cause serious infections in vulnerable people and has many weapons systems. In addition to three of the type VI secretion system spear guns, the bacteria produce a range of protein toxins, cyanide, a poisoned tipped molecular stick and more.

‘It's an exceptional case that has evolved to be extremely aggressive. So it makes a fascinating test case of an extreme example of bacterial aggression and warfare,’ said Prof. Foster.

‘It's bugs versus bugs, rather than drugs.’

The MicroWars team are using a genetically-engineered Pseudomonas strain where the poisoned spear has a fluorescent tag attached so that it can be seen under the microscope. This allows them to see precisely when it is being used.

To get even more detail, they have developed strains of Pseudomonas that glow different colours when they are using different weapons.

‘One of the key questions is: if you have all of these weapons, when are you using them? And are you using them at the same time? Then we can start to ask what are the conditions where they use one of the spear guns versus using a toxin,’ said Prof. Foster.

‘We don’t have that much data yet, but it's clear that they don't get used at the same time. The weapons systems are differentially regulated and used in different conditions.’

One hope for the research into understanding bacterial weapons is to find new antibiotics.

‘These (bacterial) toxins have targets, and these targets are effectively like bacterial Achilles' heels or weaknesses. If you find those targets then perhaps you can design other strategies against those targets,’ said Dr Allsopp.

However, Prof. Foster hopes that in the future, understanding the principles behind how bacteria compete with each other could lead to an entirely new alternative to antibiotics.

‘It's bugs versus bugs, rather than drugs.’

MicroWars is funded by the EU's European Research Council. If you liked this article, please consider sharing it on social media.